Holly came from Miami, F.L.A.
Hitch-hiked her way across the U.S.A.
Plucked her eyebrows on the way
Shaved her legs and then he was a she

Holly Woodlawn’s storied beginnings as an actress and muse were immortalized in Lou Reed’s hit 1972 glam rock song “Walk on the Wild Side.” Born in Juana Diaz, Puerto Rico, in 1946, Woodlawn came out at age 15 when she was living in Miami Beach with her mother, Aminta Rodríguez, and stepfather, Joesph Ajzenberg. Her adopted name telegraphed her indomitable desire for superstardom: “Holly” referenced Audrey Hepburn’s iconic turn as Holly Golightly in Breakfast at Tiffany’s, and her surname was scraped from the background of an episode of I Love Lucy, the American television sitcom that practically defined the 1950s. (Although in other cases Woodlawn recalled her last name coming from the name of the famous Bronx cemetery of the same name.)

Shortly after coming out in 1962, Woodlawn ran away from home and hitchhiked across the country to New York City. She explained the decision in a 2007 interview with The Guardian: “I was 15 years old and failing at high school in Miami Beach because I was too busy partying. I was supposed to go to summer school to catch up and really didn’t want to, so I joined some of these Cuban queens to go to New York. I hocked some jewelry and we made it all the way to Georgia, where the money ran out and we had to hitchhike the rest of the way.” 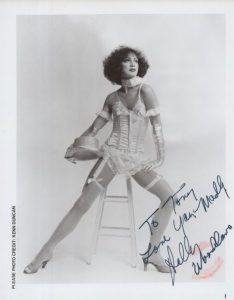 When she arrived in the city, Woodlawn faced homelessness and soon would struggle with a heroin addiction. “I lived on the streets like everyone does when they run away. I met some girlfriends who took me in and we found a place in Queens. I was really lucky,” she told The Guardian. “I met this guy who fell in love with me and asked me to be his girlfriend. I started taking hormones for a sex-change and lived as his wife, working in the days as a clothing model at Saks Fifth Avenue. Oh, the things I did! And for six or seven years they never knew I was a boy. Not a clue!”

She would recall in her 1992 memoir A Low Life in High Heels: The Holly Woodlawn Story, “In the late Sixties, the in thing to do was drugs, and I was very familiar with the trend[…] After a couple of Seconals, I became relaxed, and with a shot of speed I became famous. Drugs were an everyday occurrence for many of us, and became as common as breakfast. It seemed like the more drugs one did, the more popular he or she became. For me, a misguided runaway caught between a pair of high-heeled pumps and hi-top sneakers, drugs meant acceptance, security, and a good time.”

As she integrated herself into the outer fringe of Warhol’s Factory entourage, Woodlawn’s most frequent nightlife haunt became the legendary bar Max’s Kansas City, a favorite of Warhol’s and a watering hole for many of New York’s biggest names in art, literature, and music, including Robert Mapplethorpe, Allen Ginsburg, and David Bowie. A familiar face in the NYC bar scene, Woodlawn also recalled being at the Stonewall Inn the night of the infamous riot in the summer of 1969, when queer and trans patrons fought back against a police raid of the Greenwich Village gay bar in a rebellion that many credit for sparking the gay liberation movement.

Woodlawn’s fame arrived in 1970 when she was featured in the Paul Morrissey directed film “Trash.” In “Trash,” Woodlawn starred as “Holly,” the on-again, off-again love interest of Warhol superstar Joe Dallesandro, the biggest male sex symbol of underground films since his turn in Warhol’s 1968 film “Flesh.” Rolling Stone declared “Trash” the “Best Film of the Year,” and George Cukor petitioned the Academy of Motion Picture Arts and Sciences to nominate Woodlawn for Best Actress in that year’s Oscar ceremony. 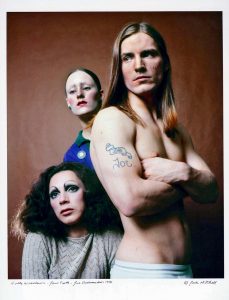 Although the Academy did not nominate Woodlawn, the following year she was cast alongside two other trans Warhol Superstars, Jackie Curtis and Candy Darling, in Andy Warhol’s infamous satire film Women in Revolt. Woodlawn followed that with another critically acclaimed turn as Eve Harrington in Scarecrow in a Garden of Cucumbers. Los Angeles Times film critic Kevin Thomas described Woodlawn as “a genuine clown, an irrepressible, infectious mugger.” New York Times critic Vincent Canby called her an “anarchic talent [who] might someday become a conventional comedienne” and “an awkward but endearing underground amalgam of Patsy Kelly, Joan Davis and Martha Raye, with a little bit of Jack Lemmon.” Despite the acclaim, Woodlawn found little financial renumeration in her growing fame and continued to face struggles with addiction.

“Candy, Jackie, and I were the last pack of Superstars churned out by the Warhol Factory in the early 1970s,” Woodlawn recalled in her memoir. “Not that this so-called status ever paid the bills. I’ve been photographed by Scavullo and Avedon, and I’ve partied with the rich and famous. […] Still, I was living on welfare and feeding off friends.”

Through the 1960s, Woodlawn had been incarcerated for theft several times in New York and Puerto Rico, most infamously for her attempt to impersonate the wife of the French ambassador to the United Nations. Although she was initially held in the Women’s House of Detention following her arrest for impersonation, Woodlawn would later describe the indignity and sexual violence that she faced when she was transferred to a men’s facility, where she was held despite her vehement protests.

By the end of the 1970s, Woodlawn was incarcerated again while on probation, and her budding movie stardom began to falter. Woodlawn moved back home to live with her parents in Miami for several years before returning to New York and finding modest stage success as a club singer. Following Andy Warhol’s death in 1987, Woodlawn became a frequent subject of interviews on the Warhol Factory legacy, and she leveraged the opportunity to publish her memoir in 1991 and relaunch her film career with small parts in several independent films through the 1990s and 2000s.

Woodlawn passed away on December 6, 2015, at age 69. Two months later, the Academy of Motion Picture Arts and Sciences would honor Woodlawn with inclusion in the In-Memorium segment of the 88th Annual Academy Awards, 35 years after Woodlawn was snubbed by the Academy for her iconic performance in Trash. Per her final wishes, Woodlawn’s estate established the Holly Woodlawn Memorial Fund for Transgender Youth at the Los Angeles LGBT Center with a donation of $25,000 in seed money. The Holly Woodlawn Memorial Fund for Transgender Youth, which continues to accept donations, benefits several programs at the Center including health care services for trans community members, Trans Pride L.A., and the Transgender Economic Empowerment Project.

Reflecting on the Lou Reed lyrics that she inspired, Woodlawn wittily remarked, “It’s a wonder I even survived this walk on the wild side, although to say I walked makes it sound so pleasant. Honey, I trudged! I crawled! I groveled! And then there were times when I waltzed.”