On August 25, 1964, following his return from his second tour of Africa, Malcolm X received a warmly written letter from Accra, Ghana, sending well wishes to the leader of the Black Power movement and his family. The type-written letter, signed “Ana Livia,” was not merely a social call from an acquaintance Malcolm X made on his trip across the Atlantic. Nor was it clearly related to Malcolm’s recent turn to Pan-Africanist politics.

“Colonial and racial oppression are but two sides to imperialist exploitation,” she explained.

“[The] final solution to both problems demands a true liberation movement, that is a confrontation with the American power structure, with American imperialism.”

Who was this Puerto Rican “freedom fighter,” living in Ghana in 1964 and on a first name basis with one of the most prominent figures in Nation of Islam and the Black Power movement?

The daughter of Puerto Rican intellectuals who were professors at the University of Puerto Rico, Ana Livia Cordero was a San Juan-born physician whose early career traced a familiar pattern of circular migration between the island and New York. She graduated with a degree in natural science from the University of Puerto Rico in 1949, then worked to organize Puerto Rican workers at meatpacking plants in New York City while studying medicine at Columbia University. In the mid-1950s, Cordero returned to Puerto Rico following her residency to work at the San Juan municipal hospital, securing funding from the Rockefeller Foundation to provide medical care to the island’s rural poor and train local midwives. In 1959, she returned to New York to continue her studies in public health at Bellevue Hospital.

Cordero was also an unapologetically radical activist who spent her life committed to the cause of Puerto Rican independence. During her second turn in the States, she helped found the New York chapter of the Movimiento Pro-Independencia (MPI). As her letter to Malcolm X shows, Cordero understood her activism as a struggle against the global forces of capitalism, racism and colonialism that linked both “the Puerto Rican liberation movement” and the “Afro-American nationalist freedom struggle” in the “world-wide struggle” of “the people of Asia, Africa, and Latin America” against the global “imperialist segment.”

Cordero developed close ties with anticolonial activists across the United States, Latin America and the Caribbean, as well as Africa and Asia. She also faced government surveillance and the threat of arrest by Puerto Rican police who accused her of fomenting revolution with her public activism. Throughout the 1960s, this included guerilla theater productions, anti-draft activism during the Vietnam War and community organizing that sought to teach Puerto Ricans without access to formal education how the daily problems they faced were fundamentally linked to global histories of capitalism and U.S. empire.

Malcolm X was not the first Black American intellectual Cordero engaged with in the 1960s. In fact, one of her most intimate professional relationships came from serving as the personal physician of U.S. civil rights activist and renowned intellectual W.E.B. Du Bois during the five years she spent in Ghana as the “Representative in Africa” of the Puerto Rican Movimiento Pro-Indepedencia.

In this position, she advocated for Puerto Rican independence in several transnational anti-imperialist conferences, including the 1964 Second Conference of Non-Aligned Countries in Cairo, Egypt, and the 1966 Tricontinental Conference in Havana, Cuba. Her characterization of Puerto Rico in these international conferences as “a colony of the United States” prevented from exercising political or economic independence directly challenged U.S. characterizations of Puerto Rico as a “commonwealth” island that benefited from the political and economic arrangements established by U.S. Congress.

While living in Accra, Cordero and her then-husband, radical Black artist and activist Julian Mayfield, moved within the circle of Black American expats, including poet Maya Angelou, who had moved to Ghana at the behest of Ghanaian President Kwame Nkrumah. It was through this network that Cordero met Malcolm X, hosting him during his visit to Ghana in 1964. 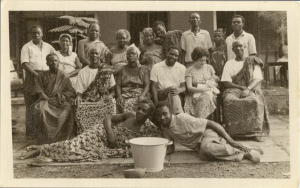 When Cordero returned to Puerto Rico in 1967, she began to distance herself from the Movimiento Pro-Indepedencia, which she felt was growing too politically mainstream. Instead, she founded her own group, the Proyecto Piloto de Trabajo con el Pueblo, dedicated to advancing Puerto Rican independence through consciousness-raising in rural and poor communities on the island.

Following her arrest by Puerto Rican police in 1968, Cordero curtailed her more public activism and adopted more covert strategies of resistance that continued through the 1980s, including drawing attention to Puerto Rico’s confinement of Haitian refugees and organizing aid for Nicaraguans in the wake of Hurricane Joan.

Cordero passed in 1992, but her commitment to radical, transnational, anti-imperialist politics has left an enduring global legacy.