Singing a song to her cat, the legend of Isabella Lovestory was born. The now rising Honduran pop icon had recently dropped out of art school in Montreal, dissatisfied with both the creatively restrictive and exclusive nature of academia and the art world, and turned to music. Born from this transient state of confusion, her first song, “Gati Lindo Precious,” nearly reads like a dreamy and frenetic love poem. She doted, portraying her cat as a gluttonous rebel who epitomizes perfection, saving her from depression. Lyrically and sonically, she blended playfulness and sadness. Lovestory sketched atmospheres that capture the conflicting emotional registers of fantasy, exploring the coexistence of longing, despair, and hope.

Five years later, Lovestory has undergone multiple artistic metamorphoses, with her most notable eclosion being her hit single, “Mariposa,” in 2020. “I hate when things stay repetitive for brand purposes,” said Lovestory of her perpetual embrace of change. Rather than cement herself as one type of artist, she embodies this spirit of growth, always attempting to explore different musical traditions and expand her sonic world. There is a creative propulsion outwards, a trailblazing mentality. Instead of stasis and closure, she glorifies a radical vision of artistic freedom. She will not be restrained. 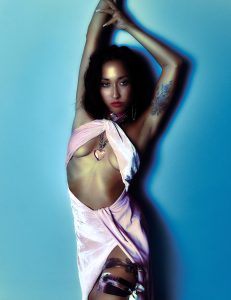 Her sense of freedom traces back to her childhood. Filled with tumultuous moves, Lovestory was born in Honduras but then lived in suburban Virginia and Montreal. She described her parents as “the black sheep of both her families,” two individuals who did not succumb to societal pressure. As a result, she inherited a sense of self-determination and individuality. Deviating from the popular genre of reggaeton, Lovestory’s father was, in her words, the “first Honduran person to play alternative music” on the radio in Honduras; her mother decided to pursue a then-risky career in architecture. Thus, when Lovestory found herself in a shockingly large, 5000-person high school, she did not conform. As a recent immigrant and being “this weird, hyper, kind of a tomboy, crazy girl,” she found herself an outsider, Lovestory shared. To escape, she turned to Tumblr.

Tumblr allowed her to find a community of similarly alienated artists. By posting movie recommendations, emotional musings, and fashion inspiration, she was able to learn and grow with like-minded people. From this environment sprung some of her most intimate life-long friendships, including the stylist behind the “Fashion Freak” music video. Reminiscing on this community, she lamented the death of the spontaneous and uncontrolled internet. “All is being fed to you, and you live in a vortex,” proclaimed Lovestory in our conversation. Her critique of algorithms is in line with her embrace of freedom and chaos — necessities of true self-discovery.

It should be no surprise that she described herself as the “curator of my world” — her music exhibits the sugary aesthetic completeness of a Tumblr page. Lovestory stresses wholeness, and her work is more than merely auditory. It engages all the senses, with every element of the production, from choreography to video editing, receiving personal attention. 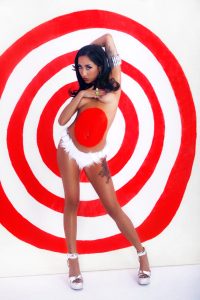 More than anything, Lovestory is fixated on the intersection of fashion and music. In the music video for “Fashion Freak,” she strutted down a treadmill in twenty-four brash and glossy looks. One outfit, in particular, a Honduran football kit accessorized with an oversized butterfly belt-buckle and platforms, is a favorite. The video is the actualization of the childhood dress-up — where in reality, one can be, as Lovestory claimed, this “chaotic fashion-obsessed princess.” Clothing obsession is also apparent in the song “Kitten Heel,” released in 2020, whereby Lovestory focuses on the clicking sound her shoes make when she walks, turning accessories into instruments.

In the case of Lovestory, art and artist are the same. For her, the persona of Isabella Lovestory is an “exaggeration of my personality” and its “purest expression.” She posited that her on-stage act, as opposed to a mask, is an unveiling of the performance of the everyday. As Isabella Lovestory, she no longer has to subdue and control herself to fit in but can be free as herself. 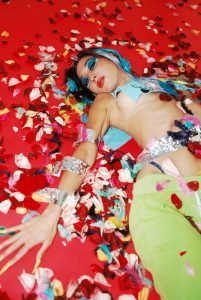 This purity of self-expression has consistently defined Lovestory. In art school, she was always a restless artist. “I used to draw until my hand was hurting so badly,” she said of the intensity of her art-making process. Despite her passion, Lovestory felt her kinetic pieces went uncelebrated in art school. She related her frustration towards the prescriptive rules she encountered — that art institutions attempted to suppress her voice by imposing unnecessary structure. 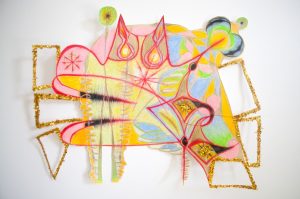 Encountering music was, as a result, freeing. Lovestory began with a genuine leap of faith, becoming a pop star with no musical history or vocal training. But, this inexperience is what unlocked her creativity. She articulated that having “no preconceived set of rules” allowed her to express herself without limitations, which in turn helped craft her singular voice.

In the studio, Lovestory does not consider the technical aspects of music but operates through intuition. When songwriting, Lovestory described “tapping out of the physical and going into the creative zone.” Her process involves slipping into a dissociative state of artistic expression where songs pour out of her. An example is Lovestory’s single “Kitten Heel,” which came together in only five rapturous minutes. She compared this expressive trance to the process of Hilma af Klint, whose works were born from automatic drawing sessions. Formed from Lovestory’s trance-like studio sessions is a new album, Amor Hardcore, set to release on October 5th, 2022.

When asked what to expect, Lovestory quickly retorted, “genreless.” Some of her latest songs move beyond reggaeton, including happy hardcore and electroclash influences. Lovestory fuses genres. As a result, her musical influences are thus unexpected — they include many indie rock and post-punk bands. When listening to these artists, she emphasized a vision of universality: “Melodies are a chemically organic formula that exists in all music. Melodies are malleable.” With this vision of the universal, she can translate sounds from disparate genres into one coherent project, expanding the scope of her reggaeton. And these sonic expansions are just the beginning, with Lovestory hinting towards making industrial and shoegaze-inspired tracks.

This past weekend, Lovestory performed at Elsewhere in Brooklyn. She embodied this alluring eroticism, capturing an entrancing blend of vulgarity and beauty. As the crowd chanted her sensual anthems, she stood atop the banister effulgent under the flickering spotlights. As she swayed her hips unabashedly in the presence of their collective gaze, the crowd knew she was not only destined for stardom but that she was ready.