Baroline is a Self-Made Woman

Caroline Diaz, better known as Baroline, will tell you that she may not know how to drive, ride a bike or a scooter, but she knows a hit record when she hears it. At only 27 years old, the music executive Diaz has cemented herself as a force to be reckoned with and a major player in the music industry. Although Diaz has an impressive curriculum vitae, and now serves as VP of A&R at Interscope Records, she is not ashamed to admit that she had to fake it till she made it — and made it she did.

The New York native, now based in Los Angeles, has an eye, and ear, for talent. Diaz went from running around, serving coffee and taking phone calls (sometimes poorly she admits) to signing multi-Platinum record artist DaBaby. Her story encompasses the elusive American Dream and proves that hard work pays off — even for “a Dominican girl from the hood that was never meant to leave.”

Growing up, her mother had jobs as a home attendant, house cleaner, babysitter — you name it. But Diaz tells LATINA that her mother never showed when she was struggling and provided her with everything an Uptown teenage girl could want, from Baby Phat to Rocawear. “Now seeing my mom, as I get older, I realize she is so strong. I think I’ve never seen my mom cry. I think that’s why I am the way I am.” With such a solid foundation, it comes as no surprise that Diaz has hustled her way to the top, working for major record labels like Def Jam, Columbia and Interscope, in addition to touring the nation and working with notable artists like 2Chainz, YG. 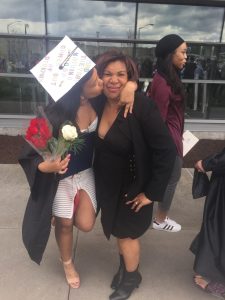 Caroline and her mom at her college graduation.

But her story has just begun. The young entrepreneur just added another feat to her long list of accomplishments as a fashion designer. In a collaboration with Good American, stemming from their new incubator program Good Inc., Diaz launched The B Project, “a new clothing line to empower women with confidence, style and a hustler’s spirit.” Her vision for this project was to create branded clothing for go-getters like herself, and nothing says it more than a hot pink hoodie with the words “Powerful Fucking Woman.”

LATINA spoke with Diaz over Zoom about her upbringing, how she broke into the music (and fashion) industry, and how she never takes “No” for an answer.

You were born and raised in New York City, how did your upbringing shape you into the person you are now?

I’m from Washington Heights. Every artist that works with me knows I rep my hood. My hood is Dyckman and it’s a special neighborhood. I call it Little Dominican Republic. It’s our own little Hispanic land and heritage. When I go home, I just tell my mom I’m going to the bodega or I’m gonna go get my hair done. I could go everywhere and the vecina knows me and everybody knows me in the neighborhood. It’s a piece of home. You hear bachata, you hear Aventura, you hear Romeo Santos, you hear dem bow. Everybody knows each other. It’s my happy place. I could be in the biggest room with the biggest executive, anybody. I always rep my neighborhood. Dyckman is the strongest part of me. 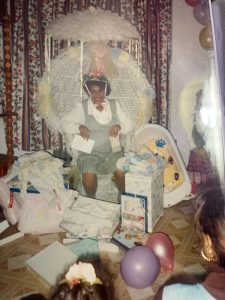 Caroline’s mom. “Super latina,” she says of the image.

As a young New Yorker growing up around so much talent, what were some artists/groups that represented who you wanted to be?

There was a blog at the time called “Necole Bitchie.” I used to go on her blog every day. I was obsessed with Necole Bitchie’s blog. And I was like, “Yo, I want to be poppin. I want to be the ‘it girl.’ I want to be like [Necole], this is the life I want.” I was also obsessed with MTV, and ‘106 and Park.’ I used to run out of school early and run to 59th Street because that’s where ‘106 and Park’ was. I would stand in line, I didn’t care how many hours to get in or whatever. Also, we used to have the Virgin store at Times Square and I used to make my mom take me to buy CDs. I was obsessed with music.

You had a passion for music from day one, and you knew that was the path you wanted to take. What role did you see yourself taking at the time?

I started an online radio show called “The Formula.” And at that time, I had a blog called “Formula TV.” And I used to put everything about celebrities and all of that. I was obsessed with celebrities. I wanted to be [a radio personality] like Angie Martinez. I was like, “I’m gonna be Angie Martinez. I have the voice.”

You’ve accomplished so much in a few years. What was your first step into the music industry?

I was in a program called The WEEN Academy (Women in Entertainment Empowerment Network) that Valeisha Butterfield, who’s actually the Co-President of the Grammys, put together for young women in music. So you come and you do this audition in Harlem. I was 19, I didn’t know shit about nothing. I just knew that I wanted to be in the music industry. So when I did my audition, Bevy Smith, the queen of Harlem — biggest personality, show host, everything — who’s still one of my biggest mentors to this day, was like, “So what’s up with you?” And I was like, “I’m Baroline and I’m gonna be a superstar.” That was it. So to say that is not to sound cocky. It just shows that there was determination for success. Nobody was going to stop me. I ended up getting in the program.

In such a competitive world, how did you deal with initial rejection and setbacks?

I took a Spirit Airline flight. No money, with $100 I go out there. And I see Marilyn Van Alstyne. I didn’t even know her at the time. She’s like, “How are you?” I’m like, “I’m good.” I said, “I’m broke. I don’t have any money, but I’m here, so you need to help me.” She’s looking at me like “This girl is nuts, what is wrong with her?” She’s like, “Well, I’m gonna go to a party real quick. Do you want to come with me?” Every person that’s a panelist that’s speaking to the kids like me were at this party. So I’m like, man, I’m off to work this room. I told everyone I’m Marilyn’s assistant. When I left, I left with the job. I became an assistant.

After that I traveled the whole country with the Bad Boy Family reunion. That was one of my first jobs. I was Mama Combs’ assistant — Puff’s mom. All of this happened because number one, I didn’t take no for an answer when both said “No” and two, I voiced that I had nothing going on and I needed something. And guess what? I made it.

After working as an assistant, what skills did you build on that led you to work your way into the recording industry?

The biggest thing I tell people that I work with is that I would rather be proactive than reactive. And I think I learned that on the road. From knowing how to book something before I’m called to making sure everybody’s good. Being on point with everything, just building structure, talent, knowing what’s hot, what’s not, what looks good, what doesn’t, you know?

So my WEEN sister, Britney, calls me home. She goes, “Hey, I work at Def Jam, I’m about to leave to work with Young Jeezy. I need somebody to replace me [as an assistant] at Def Jam.” So I’m like, “Hell yeah, I want to go to Def Jam.” Def Jam is one of the biggest cultural labels of all time. And everybody has worked there, all the big executives.

How did you go from being an assistant to booking talent?

I go to Def Jam, I suck as an assistant like, I’m horrible. So I’m like, man, these people are not gonna hire me, but I’m gonna figure something out. Well, I’m about to leave, and they offered  $1,500 to work there. So I literally had no title. I’m doing everybody’s expenses. I’m picking up coffee. I’m just hustling. But what makes me happy is that I’m at the radio department, since I wanted to be a radio personality. I’m learning about ads and pitching records and making stuff hit. I’m trying to sneak in some marketing meetings and give ideas and you know, figuring it out.

So every time I did something wrong, I never took it as “Oh my god, I’m messing up.” I just took it as “I’ll do better next time.” You’re in a workplace, you know? So I started finding artists. I don’t care what nobody told me. I know a good record when I hear it. I just know like, God gave me a blessing.

Looking back at how far you’ve gotten, what shocks you the most about how you got to where you’re at now?

The first artist I worked with was DaBaby. The first year that the DaBaby came out we were on Jimmy Fallon, Saturday Night Live, Jimmy Kimmel, Best New Artist, BET, Billboard magazine — everything in one year. And he taught me so much, like DaBaby doesn’t even know. We’re talking about hit records and ideas, and just learning and just never letting anybody know that I was the girl from the hood that didn’t know shit. 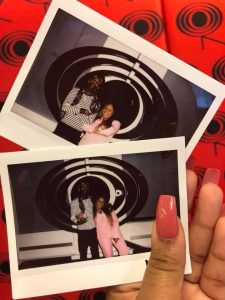 Caroline and Polo G on the day that she signed him.

Most recently you’ve started working in fashion. How did your most recent venture, The B Project in collaboration with Good American come to fruition?

Emma Grede, who’s the owner of Good American, I met her at a party in LA. I didn’t even know her, I think I went up to her and I was like, “how do I find a man in LA?” And she burst out laughing hysterically. She was with her husband and he co-founded SKIMS and denim brand Frame, and they burst out laughing and we went out that night.

Later on I was thinking, “What if I make a sweater where I just put who I am?” I want to see when you’re talking to me, you see it say “Fucking Boss.” So I came up with the idea and I hit up this girl, this female Illustrator to design it. I posted photos of the designs on my page and Emma saw them and told me, “let me sell these for you”.

In your own words how do you define a “Self-Made Woman”, which is one of your designs for The B Project?