Rio de Janeiro’s born-and-bred, 24-year old model Juliana Nalú has always been a dreamer. At the early age of 6, Nalú announced to her mom that she wanted to be a globally known model. At the time, she lived with her mom and brother, Douglas, in the favela Complexo do Chapadao, north of Rio de Janeiro. Her parents had separated, but she still had contact with her father and three other half-siblings. On a recent sunny Saturday afternoon, I visited her at her home in Los Angeles, to talk about her roots and her path towards international recognition. Juliana Nalú recounted, “I wanted to do big things outside of Brazil, but I had no idea how to… the dream sounded too far for me, but I knew that I could try to reach [it].”

For many, Rio De Janeiro is a tropical Elysium, where sun-kissed locals play futebol on Ipanema beach and listen to Bossa Nova icons, like Jorge Ben Jor, by night. Nalú experienced that joie de vivre throughout her childhood, goofing around with her neighborhood friends and cousins. However, her true north star was modeling and by the time she was 13, Nalú and her mom were traveling throughout Brazil to the leading beauty and modeling companies in her country. When she was 18, she was selected to be part of L’Oreal Paris’s Brazil campaign, and soon after, she landed a modeling agency. “My mom was helping me follow my dreams, traveling to agencies with me, and making brand connections. I lived in the favelas with my family until I was 18,” she describes. “It was hard to deal with the violence, and I didn’t have access to many privileges in Brazil, compared to others. However, my mom had so much love for [me and my siblings] and gave us everything we needed to be a good person.”

Favelas are neighborhoods in which buildings are constructed informally from timber and plaster. These structures are often built on top of each other, on the outskirts of major cities, layered against steep hillsides. Brazil is home to a diverse demographic, but favelas are predominantly filled with Afro-Brazilians. Racial disputes born from colorism influence how Brazilian populations view one another, and the favelas are no exception. Nevertheless, according to Nalú, a robust culture developed out of the humble lifestyle of favela-based Afro-Brazilians, offering them a remarkable life. “I love the fact that when [I am] in Brazil [I] can just be [my]self. You don’t have the pressure of wanting to be something or be someone specific. My family always motivates me. So I am free to be whomever I want or whatever I want.” 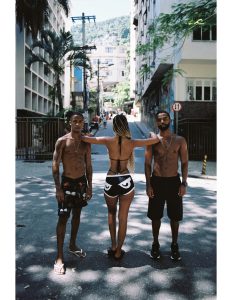 As Nalú found more and more success in Brazil, her dreams kept getting bigger and bigger.  In addition to modeling in Brazil, she had also found success acting on a major Brazilian show. Then, in 2017, when she was 19, she visited Los Angeles, her first US city, and reveled in its similarities to Rio. While visiting the US, Nalú signed with ELITE Models, which she credits with making her feel “comfortable” and representing her Afro-Brazilian “identity” well.

Over the next few years, Nalú traveled widely for jobs and applied for her US work visa. When the pandemic struck in the beginning of 2020, she found herself stuck in the US, prevented from returning home or visiting her family in Brazil. , Finally in January 2022, after entry restrictions had loosened, she was able to reunite with her family. . Nalú recounts being emotional at the reunion, “In the favelas, we don’t need much to be happy. I was in tears during my last trip to Brazil. You can see the minimal and simple ways my people live. Simplicity is everything, and everyone is warm.” She enjoyed her mom’s home-cooked feijoada (black beans, meat, rice, cassava flour, vegetables, and grains) and reminisced about her childhood, “I would be at the beach every day. I remember playing in the street with my friends [until late]. Brazil is more about that freedom and having fun.”

The equatorial climate of Brazil serves its people well; Brazilians take advantage of body movement activities that bring them sheer joy during the long warm daytimes. The magnificence of Brazil is visible through the way locals celebrate themselves and their bodies. Yet, irrespective of Brazil’s physical scenery, sinister socioeconomic and racial disparities impact the country’s political system — namely, the frequency of gun-related incidents among impoverished people.

These violent events are often what define Brazil through the eyes of global news channels and film. “The film ‘City Of God’ was based on land in Brazil,” Juliana Nalú explains. “The ‘City Of God’ is an area of land without energy, without electricity or water — nothing. So, this is an example of [my] favelas.” Outside of entertainment, “the news about Brazil is only the negative [depictions] about violence.” The Afro-Brazilian model reflects: “Going on a motorcycle and being around the favelas; seeing your cousins, seeing your friends and playing around is what is beautiful.” 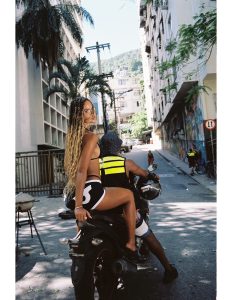 Most recently, Nalú has found an artistic community of women who have helped her find a secure home in Los Angeles. She still has plans to travel back to Brazil, of course, with another trip already scheduled for this April. . “It’s an explosion of culture that I love, and I’m so proud to say that it’s mine, and I’m a part of Brazil. I just try to bring a little piece of Brazil with me everywhere I go.”

Juliana Nalú is opening doors for Afro-Brazilians hoping to break into the fashion and modeling industry and aims to embody her home, wherever her career may take her. She is currently the only member of her family living outside of Brazil but hopes that her success becomes their success too. Nalú recognized the benefits of studying English and how it has allowed her to penetrate different fashion markets. Brazil is a country where people may turn a blind eye to the disproportionate violence and suffering of those in poverty, and those whose skin color is dark. “The visibility I have now is a privilege,” Nalú pauses to consider the path she has been charting. “I want the world to see a Brazilian from Rio, the favelas. Good things exist there. So, for the next girls who come after me, the [industry] will be more open.” 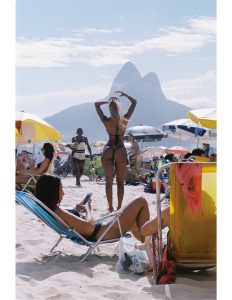 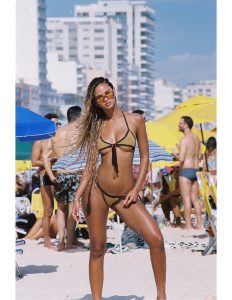 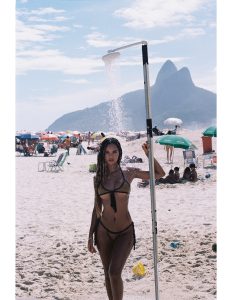 Credits:
Photography by Rafael Moura and Styling by Moa Gijsen.