Carla Morrison has chosen herself, enduring a difficult journey of introspection that has led the Mexican-American singer-songwriter to arrive at a place of self-love and radical acceptance. On April 29th, Morrison released ‘El Renacimiento,’ her first album in nearly six years. Threading personal realizations and prioritizing mental health, Morrison began penning experiences that would later transpire into a full-length project. “It started happening by the end of 2019. I felt like I wanted to start making songs and maybe think about a future album. I remember I bought this notebook where I had all my ideas, and it had a picture of the birth of Venus on the front. I just really liked seeing myself as her and just accepting all of the parts of my being, my beautiful parts, my darker parts, my parts that I had to work on,” Morrison explained to Latina.

Entering a new chapter of her life, and sitting down (virtually) with Latina, the pop artist went into detail on the work she undertook to come into her own. This process did not happen overnight, and while searching for answers, Morrison worked to shed layers of her identity that no longer served her. In doing so, she was reminded of how her power lies within — and she worked to tune out any external noise. “I don’t have to compare myself to anybody. My story is my story. And that’s it. […] All the answers were within me. But at the same time, I had to learn to forgive myself,” Morrison noted.

Contemplating her career in an isolation that pre-dated Covid-19, and later folded into quarantine, Morrison confronted the idea of a perpetual state of hiatus. Luckily, that thought was fleeting, and the talented singer saw the opportunity to create a project that lent her newfound perspective. She worked with intentionality, hoping to get to a place where she could create an album that would help people “reflect on their lives,” in her words. 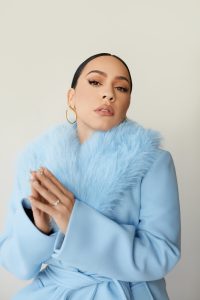 In Paris, where she lived for two years, Morrison felt inspired but at times, alone. Readjusting from her life in Europe, the multi-hyphenate was eager to create music and detail her self-discovery. The result is, ‘El Renacimiento,’ a project and process that took years from its initial inception in 2019 and that allowed the Latin Grammy-winning singer to assess how she creates art. “I think one of the things that I really learned from this process was that creating art and being an artist takes time, and I should never make myself try and live in a space that doesn’t belong to me or my process. I feel like nowadays, we’re all kind of seeking approval because we want to ride that wave. But sometimes, that wave isn’t the same for all of us,” Morrison proclaimed.

In creating an album with underlying themes of rebirth, Morrison elected to bring in musical influences that mirrored where she was in that moment. “I wanted my album to sound like the music I listen to and not just like, ‘Oh, that’s all it’s gonna sound like.’ I wanted the songs to also speak to me. I’ve always allowed my songs to speak to me,” the singer explained.

Existing between genres, each track delivers a refreshing take on the singer’s recognizable sound. She shared, “My husband and my brother in law, who have been my producers for a long time, really helped me achieve a sound that was more global, that was more elegant, that was more across the board, and it just worked on a different level.”

In order to balance the album’s overall tone, Morrison had to bridge low points in her journey of self-discovery with times of ecstasy. One of the stand-out tracks in the album, ‘Diamantes,’ embraces passionate love through a pop-infused offering that details moments of belonging. In the song’s music video, Morrison succeeds in portraying the dynamics of emotion and even extends a feeling of bliss to the viewer.

At the same time, other songs on the album prompt inner-reflection that some viewers may be hesitant towards. After years of measured growth, documented by hit albums, award-winnings, and sold-out shows, Morrison is dedicated to a career that feels natural to her.

As a prominent figure with a growing fanbase, including one million Instagram followers and several accolades under her belt, Morrison recounted how she’s evaded the dark realities present in the music industry. “What’s always protected me in this industry is honesty. When something’s not honest, I feel it in the gut. […] It’s important to keep my life in a very truthful place. Because at the end of the day, that’s why I make music. I want to talk to people who want to connect and feel the experience of being alive in a more meaningful way.” Inevitably, success has led others to lose their sense of self, but Morrison is more sure of herself than ever, shifting her goal post.

With a career spanning more than a decade, Morrison aims to expand her craft, allowing her art to live outside the parameters of her music. She stated, “I do want to make myself more available to creativity because, for the longest time, I write songs when I’m supposed to be in album mode. I want to keep making songs. Even right now, I’ve been making new songs because I want to keep working on that muscle; I also want to write for other people; I would also love to write a poetry book.” 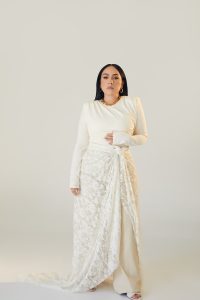 As she enters a renaissance defined by intense ambition, Morrison reflected on her life’s pillars — the foundations that empower her to be authentically herself. “My support systems were family and friends that would remind me who I am and help me to keep growing. I could also do that for them. My support system is also my healthy habits of feeding my body and mind in a good way. To spend time in nature, with my doggies, and my plants, cooking, just really making time for that inner-self,” the beloved artist explained. Adapting to a world of eased pandemic restrictions, internal desires, and newly established boundaries, Morrison understands the steps necessary for her career to flourish yet remain sustainable.

Reflecting on times when tour was home-base and personal relationships seemed distant, Morrison cherishes the experiences but doesn’t wish to maintain that level of touring. Rather, the singer wants to prioritize and place value on the circle that nourishes her well-being. “I would probably approach [touring today] at a pace where it makes sense and makes everybody happy. We’re gonna go on this US tour, and then we’re going to go to Spain, then Mexico and Latin America. I’m excited about it,” the singer enthusiastically explained to Latina. Finishing a stint of shows, opening up for Coldplay, Morrison acknowledged the importance of touring; it’s an extension of her craft. While the ways that she navigates the world have shifted, Morrison has made it possible for her career to continue, putting herself first, and her fans thank her for it.