As the oppressive summer heat becomes evermore inescapable, lurking in every shadow and supposed refuge, the only true escape we could find was through cocktails. These four summer cocktails transform “having drinks” into “having refreshments,” each packed with the power of reinvigoration and recovery. In the perpetual fight against the elements, we want to remind you of a necessary shield: tequila. Grab a glass and seize the summer with these drinks.

Tiktok sensation and chef Edith Galvéz, known for her tranquil, satisfying, and informative cooking videos, sent us a cocktail recipe that is sweet yet packs a punch. With masterful precision, Galvéz balances what in the wrong hands could easily be saccharine notes with acidity, crafting a drink that will leave you drunk and asking for more, a fun yet risky combination.

Recipe: Depending on how stressful this past week has been, mix either one or two shots of tequila, one ounce of agave syrup, one-and-a-half cups of watermelon juice, and one teaspoon of lime juice into a shaker over ice. If one is feeling quite fancy, garnish with a mint, a wheel of lime, and a slice of watermelon. 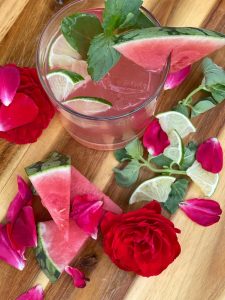 You may recognize Enrique Olvera from Season 2 of Chef’s Table, where they portray his restaurant Pujol in Mexico City as a culinary monastery rife with ambition, perfection, and love. Although he is known for his decadent and complex moles, he also worked with bartender Jim Meehan to create this zesty, refreshing, and inventive cocktail full of harmonious citrus.

Recipe: Combine two ounces of tequila, half an ounce of Galliano (vanilla anise liqueur), and one ounce of tonic water in a shaker over ice. Before pouring into a glass, squeeze a lime and an orange and muddle a sprig of cilantro. Afterward, rim the glass with sal de gusano (worm tequila salt), if you are feeling adventurous, or salt and garnish with slices of cantaloupe.

Ivy Mix, the author of Spirits of Latin America and James Beard Award nominee, is known for her charming bar Leyenda in Brooklyn. This drink, the Tia Mia, is both an anagram and an inversion of the Mai Tai, serving to both intersect Hawaiian and Mexican culture. The result is a tropical cocktail that tastes like nostalgia: a blend of familiarity, warmth, and surprising novelty. The Tia Mia is a somehow unforgettable day spent lounging on the beach.

Recipe: Mix one ounce of mezcal, 1 ounce of rum, half an ounce of curaçao, a three-quarters ounce of lime juice, and half an ounce of orgeat syrup (or any simple syrup) to a shaker over ice. Shake for a few seconds and, if desired, garnish with a sprig of mint and a wheel of lime.

Renowned Mexican mixologist Mica Rousseau, who worked at the esteemed Fifty Mils in Mexico City, created La Fresa. It is a wonderfully sweet and refreshing drink, with notes of lemon and grape that pair beautifully with the waves of strawberry, ultimately creating a delightful symphony of fruity notes. This drink is light on alcohol but heavy on flavor.

Recipe: Mix one-third ounce of tequila, three-quarters of an ounce of white zinfandel (or any rosé), half an ounce of strawberry puree, and one teaspoon of lemon juice in a shaker over ice. Shake briefly and, if desired, garnish with dehydrated strawberries.