It’s quite the rarity that an artist gets the opportunity to interpolate a Destiny’s Child song, let alone in Spanish. However, Emilia does just that with her new single “La Chain,” in which the rising Argentine pop star puts a new twist on the Destiny’s Child classic “Independent Women Part I.” In an exclusive premiere, Emilia spoke with LATINA about getting clearance from Beyoncé, her reimagining of the song, and what’s next.

“When I found out [the sample was approved], it was a big surprise!” Emilia gushed about interpolating “Independent Women” in “La Chain.” “[Beyoncé] is the artist that I admire the most in the world, who has inspired me my whole life. With her recently released album [“Renaissance”], she continues to be a queen who inspires me. She’s iconic!”

In the music video for “La Chain,” Emilia struts to a poker table with her eye on an expensive necklace. The familiar R&B bounce of “Independent Women” plays as she says the movie title “Charlie’s Angels” in a nod to the original song. Then Emilia serves up her new empowering lyrics of her own in Spanglish. “They’re bothered that I’m the queen / Baby, why you talk about me?” she sings. By the end of the video, Emilia has defeated all her male competitors at the poker table, claiming the necklace as her prize. “La Chain” is her fierce and sultry take on Destiny’s Child en español. 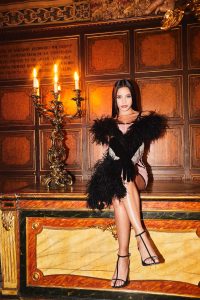 Emilia first connected with “Independent Women” as a child, and the song’s message still resonates with the 25-year-old singer. “I love that it talks about empowerment. I buy my own things. I don’t need a man, and without makeup, soy perra igual,” she told LATINA about her memories of the girl power anthem. As a recent Vulture article confirmed, Queen Bey indeed listens to the music of artists who want to sample songs she co-wrote, and she will push back if she doesn’t like it. With that in mind, Emilia added, “To know that she or her team approved the song for me to be able to release it, it’s a proud moment for me as an Argentine artist. It’s an honor. I made it with a lot of respect and admiration for her, and I hope she likes it.”

“La Chain” is Emilia’s first release since she dropped her debut album, “Tú Crees En Mi?” in May. The title speaks to the last few years she has spent fighting for her dream to be a solo artist after a brief stint in the group Rombai. “The title reflects what I’ve lived, to believe in something until it becomes a reality,” she said, adding, “Even though there were people who doubted me, I never stopped believing in myself and always had my goals and future in mind.” Her persistence comes through in knockout club bangers like “cuatro veinte” and “Intoxicao” with fellow Argentine singer Nicki Nicole.

Emilia has emerged as one of this year’s breakthrough Latin acts, and she’s not slowing down. Next month, she will realize another dream, performing two back-to-back sold-out shows at Buenos Aires’ massive Movistar Arena. “To be an Argentine artist and represent my country, it makes me so proud to be able to do that. To have the recognition that I didn’t have before for all my hard work and sacrifice is what’s so beautiful to me,” she concluded.

Watch the official music video for “La Chain” by Emilia below.