These words, spoken by Mexican-American labor activist Emma Tenayuca in a 1983 interview with the Texas Observer, capture the tenacious spirit of the Latina-led labor movement in Depression-era San Antonio. Tenayuca not only spoke the words, she also lived by them.

Tenayuca was first arrested at 16 while striking with the mostly female workers at the San Antonio Finck Cigar Company in 1934.

“That was the first time I went down and saw a police action,” she told the Observer. “I landed in jail and learned how difficult it would be to make [San Antonio] a union town.”

The same year of her first strike and first arrest, Tenayuca graduated from Brackenridge High School. Born in 1916, Tenayuca was the eldest daughter of 11 children in a working-class, devout Catholic Mexican American family in San Antonio, whose Spanish and Indigenous roots stretched back to the 1721 settlement of the Los Adaes mission, near present-day Natchitoches, Louisiana.

In interviews, Tenayuca would later attribute her radical political education to her grandfather Francisco Zepeda and to the socialist soap box orators who gathered on Sundays in the Plaza del Zacate at San Antonio’s Milam Square.

“I read every book I could on anarchy,” she would tell interviewer Luis Torres in 1987.

Tenayuca also received an education on the picket line. Following her first arrest, she began attending Workers Alliance of America organizing meetings in San Antonio and visiting the city’s unemployment offices with former Finck Cigar workers throughout the 1930s. Meeting with the masses of unemployed San Antonians at the peak of the Great Depression, Tenayuca helped build the ranks of the Workers Alliance and organize protests against the racially discriminatory local management of the Work Progress Administration (WPA).

A Depression-era unemployment relief program established in 1935 by President Franklin Delano Roosevelt, the WPA was ostensibly open to all, regardless of race or gender. But the Workers Alliance protested the unequal distribution of WPA jobs among San Antonians, as well as the systematic removal of Mexican Americans from public relief rolls.

Yet Tenayuca understood that the work of the union had to extend beyond the most immediate economic issues.

“I had visions of a huge hall on the West Side, possibly maintained by several unions—pecan, laundry, ironworkers—which would become a center where you would help people become citizens, where you would have classes in English,” she would later recall.

“The union had to serve as a social service organization because of the conditions of the people.”

As Tenayuca’s dreams demonstrated, the Workers Alliance focused on immigration activism in San Antonio, where the city’s Anglo leadership deployed not only police but also immigration authorities to break strikes and terrorize undocumented workers on the picket line.

“Among the very first issues at the Workers Alliance was the right of workers to organize without fear of deportation,” Tenayuca explained.

“But the pressure of economic conditions moved faster in the direction of poverty… The year 1938 proved to be a very disastrous year for the migratory workers…I felt there was something that had to be done.”

Throughout the 1930s, Mexican and Mexican American people in the United States faced widespread scapegoating for the hardships of the Great Depression. As nativist sentiment swept the country, U.S. Congress and the Department of Labor, which oversaw federal immigration enforcement, expanded immigration controls and the nation’s deportation apparatus to reduce a so-called surplus population of “alien” labor.

Efforts to “repatriate” Mexicans as an unemployment relief strategy also targeted documented immigrants and citizens of Mexican descent, as campaigns across the Southwest and Midwest pushed “Mexicans,” excluded from local, state and federal relief programs, to instead “voluntarily” leave the United States and “repatriate” to Mexico.

For Mexican Americans, the term “repatriation” was misleading, as one cannot accurately describe the removal of people from their birth country and home as such. Historians have estimated that the government ultimately coerced more than 500,000 Mexican and Mexican Americans to leave the United States by the end of the decade, with over half departing from Texas.

Tenayuca described the San Antonio Pecan Shellers Strike of 1938 as “the culmination of about four years of intensive organization.” The three-month strike, which began in response to a pay cut at the start of the year, followed several other labor actions in the city, including a laundry worker strike and a cement workers strike, during which Tenayuca rose in the ranks of the Workers Alliance and faced several more arrests.

Pecan crackers’ wages were cut from 50 to 40 cents per 100 pounds. Meanwhile, shellers saw their pay fall 1 cent per pound, from 6 and 7 to 5 and 6 for nut pieces and halves, respectively. The conditions in shelling factories were already perilous, with the buildings’ lack of ventilation creating a dangerous haze of brown dust that lingered in the air, which workers linked to the high rate of tuberculosis deaths among factory laborers.

“Emma Tenayuca and her attorney, Everett Looney, in courtroom during her trial on charges of unlawful assembly and disturbing the peace” 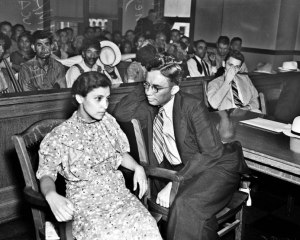 Led by Tenayuca, The Workers Alliance built support for the strike through mass meetings and demonstrations. Ultimately, nearly 12,000 workers, mostly Latina, walked off the factory floor and applied for a charter from the CIO-affiliated United Cannery, Agricultural, Packing and Allied Workers of America. The strikers faced harsh backlash from San Antonio officials, with mass arrests of hundreds of picketers capturing national attention.

Emma Tenayuca was not a sheller or a cracker, but by 1938, she was a member of the Communist Party and married to Homer Brooks, the chairman of the Communist Party of Texas. Facing criticism in national newspapers for Tenayuca’s political ties and fearful that public opinion would turn against the strike, CIO leadership removed Tenayuca from her role as strike leader. Nevertheless, strikers spurred the Texas Industrial Commission to investigate factory conditions, and the passage of the Fair Labor Standards Act of 1938 established a federal minimum wage that raised workers’ pay. 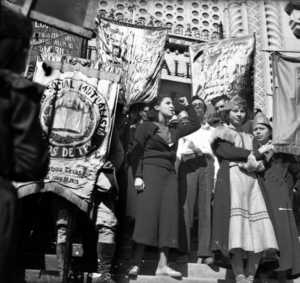 Unfortunately, factory owners responded to new worker protections by mechanizing their factories and eliminating nearly all shelling jobs by 1940. Meanwhile, newspaper attacks against Tenayuca escalated until death threats and violent protests drove the labor organizer out of San Antonio.

Tenayuca spent the next several years living under an assumed name in Houston and formally severed ties with the Communist Party in 1946 after separating from her husband. It was not until the 1960s that Tenayuca returned to San Antonio, where she taught bilingual education in local public schools until her retirement in 1982. With the rise of the Chicano movement in the 1970s, Tenayuca began earning nationwide recognition for her revolutionary civil rights leadership. In 1991, she was inducted into the San Antonio Women’s Hall of Fame, embraced by the city for the very activism officials had met with police terror and incarceration only half a century earlier.