Inviting “Nomadland” director Chloe Zhao to helm Marvel’s latest release, “Eternals,” may have seemed like an odd choice to some. But to those familiar with the studio’s well-documented habit of drafting indie darlings to the big leagues, Zhao’s inclusion was business as usual. In a movie full of surprises, perhaps the most pleasant is how distinctly it feels like a product of its director. Mostly removed from the main MCU canon, and all the better for it, “Eternals“ is as chimeric a film as Marvel has ever released. Equal parts superhero origin story and dysfunctional family drama with a dash of climate anxiety and just enough “eat the rich” rhetoric, “Eternals“ is an ensemble adventure that may be too busy for its own good, but nonetheless brims with ideas while its counterparts are comfortable treading water.

The movie’s plot line, generic to the point of sounding more like a corporate mantra, is ripped straight from the Marvel textbook: a mismatched team of heroes band together to fight a world-ending force of evil. This iteration takes a group of immortal beings known as the Eternals and pits them against the Deviants, a group of mammothian creatures that were put on planet Earth to dwindle its resources. In the centuries since the Eternals fought the Deviants to extinction, most of the group has split up and started their own lives, biding their time on Earth until they get the call to return home. But when an evolved group of Deviants resurfaces in the present day, the Eternals are called back into action once more.

Saddled with both establishing the Marvel Cinematic Universe’s  newest additions while working within Marvel’s contractually obligated bag of tricks, Zhao does an incredible job repurposing what’s familiar about the franchise, improving on what already works about the MCU and making do with what doesn’t. Marvel’s now-infamous exposition dumps, for instance, are always particularly grating, as they continue to be here, but Zhao does audiences the favor of staging most of the mumbo jumbo against a picturesque, South Dakota backdrop.

Naturally, most of the action in the film depends on ironclad demigods battling amorphous blobs of CGI, but the Deviants are a surprising exception, echoing the existential ghouls of Alex Garland’s “Annihilation“ with loose strands of DNA and ligament that rapidly evolve as needled tendons suck the life from their victims. The smaller set pieces work beautifully, as well, because Zhao grounds the action in something tangible, opting out of the Atlanta-based green screen and wirework factory that’s responsible for most of Marvel’s output. An especially thrilling sequence set in the Amazon, reminiscent of Iñarritu’s “The Revenant,” is head and shoulders above even the most memorable MCU set pieces, establishing real stakes instead of killing time with toothless action, bright colors, and banter.

But Zhao, mightily as she tries, can only push so hard against Marvel’s creative constraints. Instead, the director’s most invaluable contributions have everything to do with the characterizations of this sprawling ensemble. “Atlanta“ star Brian Tyree Henry finds an emotional resonance in tech wizard Phastos, effortlessly stealing just about every scene he’s in as a jaded mastermind struggling to maintain his faith in humanity. Elsewhere, Kumail Nanjiani and Harish Patel make a pitch-perfect odd couple as Kingo, a former world-saver turned egotistical movie star, and Karun, his faithful manservant who’s determined to film the ultimate behind-the-scenes documentary with a seemingly endless supply of camcorders.

Angelina Jolie and Don Lee make the most of a thread about superpowered neurodegeneration that covers more or less the same ground as “Logan” without having much to add to the conversation, and “Walking Dead” star Lauren Ridloff makes her MCU debut as Makarris, the franchise’s first disabled hero, in a charming, but abridged, introduction. “Dunkirk” actor Barry Keoghan brings his trademark broodiness to a character searching for purpose in the lesser of two evils, while newcomer Lia McHugh harkens back to Spielberg’s 80s and “Harry Potter”as pint-sized sidekick Sprite, a 7000-year old shapeshifter stuck in the body of a teenager. 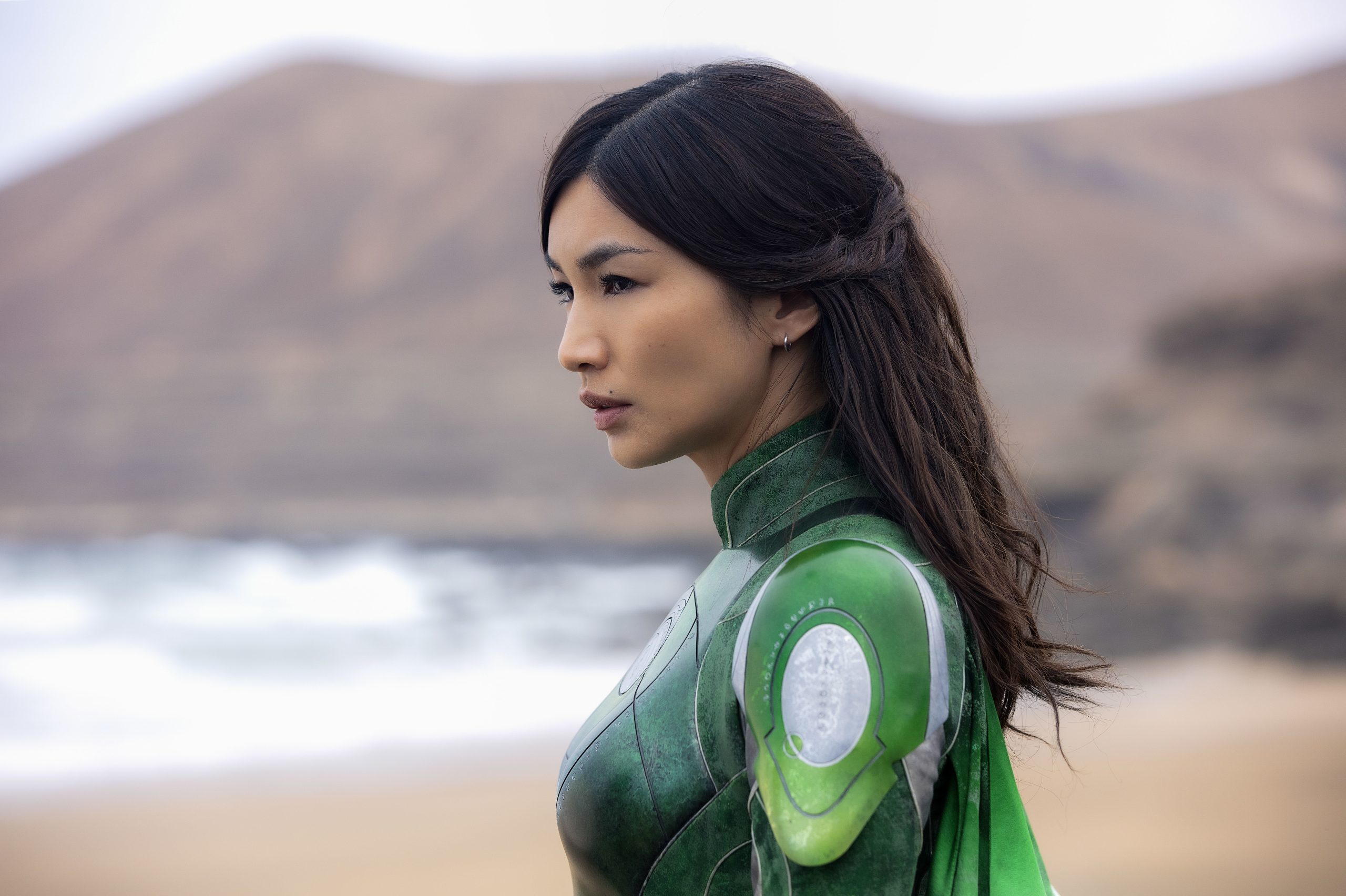 The supporting cast delivers so consistently, in fact, that it ends up being pretty easy to forgive the mismatched chemistry of its stars. Gemma Chan and Richard Madden both deliver meaningful performances,  but the subtleties of Chan’s character  don’t pair well with Madden’s robotic, telegraphed delivery. It’s a bit more difficult now that Amazon Prime’s “The Boys” has successfully made muscular white men with lasers coming out of their eyes into the most terrifying thing on the planet, but there’s a shallowness to Madden’s performance that makes his arc all the more predictable.

Sadly, none of this is helped by an arrhythmic edit that does little justice to the inspired work from both cast and crew. Zhao, who was Oscar-nominated for her editing work on “Nomadland,” was ironically absent from post-production on “Eternals” to promote the aforementioned film, instead leaving the job to Dylan Tichenor and MCU mainstay Craig Wood. Both are talented editors in their own right, but Zhao’s images have a certain hypnotic dormancy, only coming alive within the relationship she creates between them, and her notable absence from the editing process is deeply felt.

Still from “The Eternals” (2021). Courtesy of Marvel Studios.

Marvel’s post-“Avengers” landscape has long been the big, floating question mark slowly descending upon an empire built on a foundation of longevity. But now, there’s nothing left to prove. No records left to break and nobody to compete with but themselves. It’s fitting, then, that Marvel’s big introduction to Phase Four of the MCU follows a group of indestructible super beings taking stock of where they’ve been and asking themselves the same question that, immortal or not, we’re all posed with at one time or another: Where do we go from here?