Francisca Alegría, a student of the Sundance Writing Labs, premiered her short film, “And the Whole Sky Fit in the Dead Cow’s Eye,” in 2017, the same year she started writing what would eventually become her debut, 2022’s “The Cow Who Sang a Song Into the Future.” Alegría spent four years developing the film with her team, eventually shooting in southern Chile during the COVID-19 pandemic.

Her expanded 2022 rendition is a masterpiece, following a Chilean family rocked by the sudden return of their long-deceased matriarch, Magdalena. More than two decades after Magdalena tied herself to a motorcycle and rode it off a pier near the family home, she’s given a second chance at life and an opportunity to make amends with the family she left behind. But, while her daughter Cecilia had long since moved away from home, Magdalena’s husband and son stayed back in their rural hometown. There they’ve spent every waking moment managing the family’s dairy farm, which is nearing financial ruin as local environmental concerns become more pressing and corporate pollution more rampant. 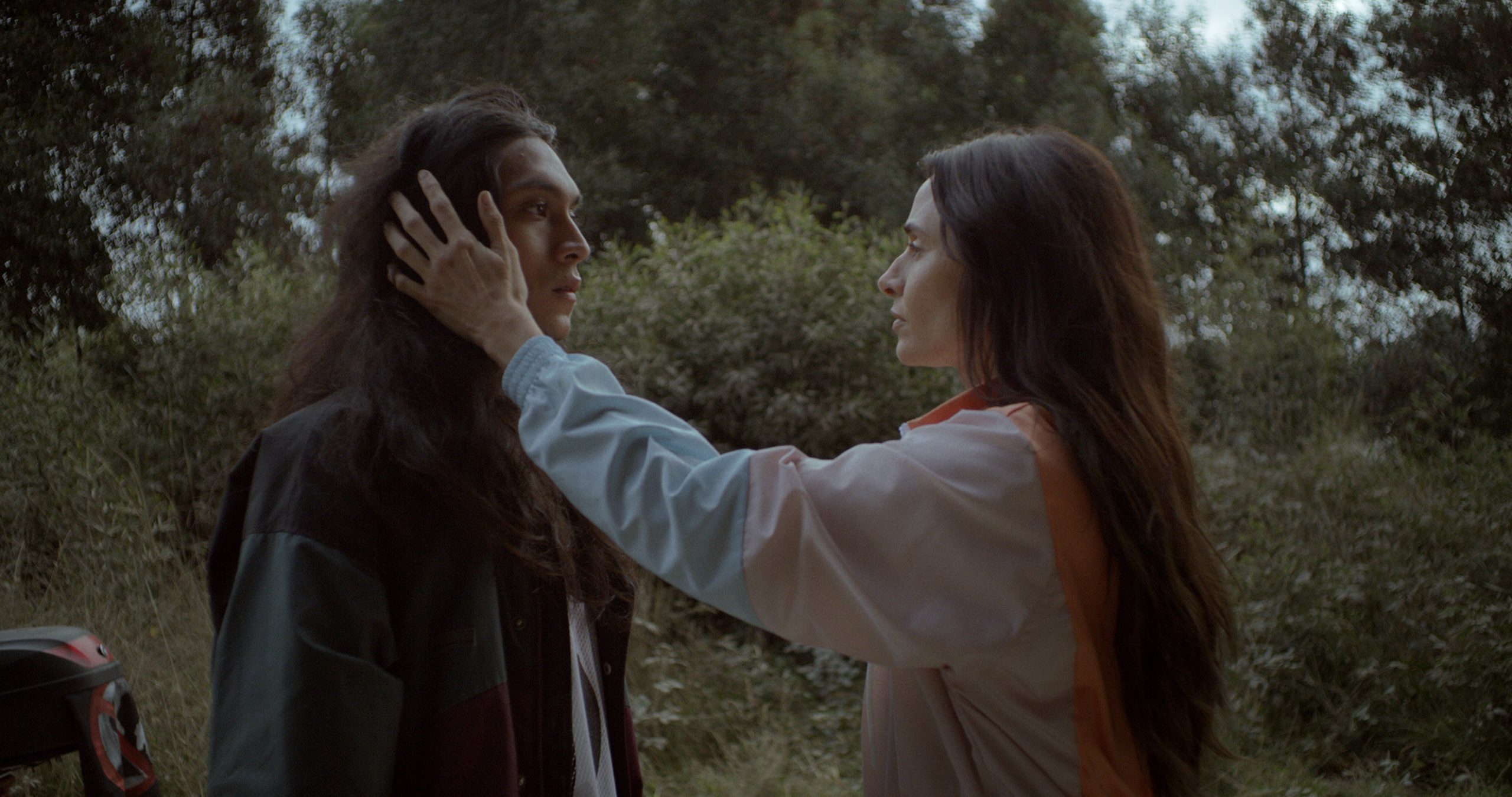 The Chilean actress Mia Maestro as Magdalena in Francisca Alegría’s “The Cow Who Sang A Song Into The Future” (2022). Photography by Inti Briones.

“The Cow Who Sang,” which deals heavily with the idea of generational trauma, is partially based on true stories of Chilean corporations who have contributed to ecological crises in the region either through pollution or the decimation of natural resources. The film’s opening scene shows a school of dead fish, killed by local pollutants, guiding Magdalena up from the depths below. Alegría said. “It’s very rooted in reality and in things that are happening in our ecosystem and in our world.” While conceiving the film and its animal characters, Alegría says the “camera needed to be looking at [the cows] the same way that it’s looking at the human actors. We were very conscious about portraying them with the same dignity and not as objects of our entertainment.” One especially poignant example of this comes later in the film when a choir of cows laments their collective death with a haunting ballad.

But that connection between the film’s central family (to both each other and the natural world around them) is tenuous, specifically in the generations of women that collide throughout. In the film, Varela’s character struggles with the sudden return of her once deceased mother, Magdalena. When she’s brought back to life, having not aged a day since her death, Cecilia is presented with an opportunity to confront the trauma that has already started taking a toll on her own children. Undeniably, motherhood is a central theme in the movie.“I feel like I prepared for it by just a subtle understanding of very specific family dynamics and how trauma tents us all. We all carry a great deal of cellular memory of pain, of things that have marked us,” revealed Varela.

“The Cow Who Sang” is a film that establishes intimacy not only between its characters, but also in the relationship those characters have with nature. Our first moments with Cecilia are spent watching her kill a spider that’s made its way into her home, immaculately clean and sealed off from the outside world. Magdalena, by contrast, immediately connects herself with the soil beneath her to feel grounded in her second life as she ascends from the water. The camera pans from there, landing on a colorful mushroom that stands proudly just a few feet from where Magdalena finds her footing. 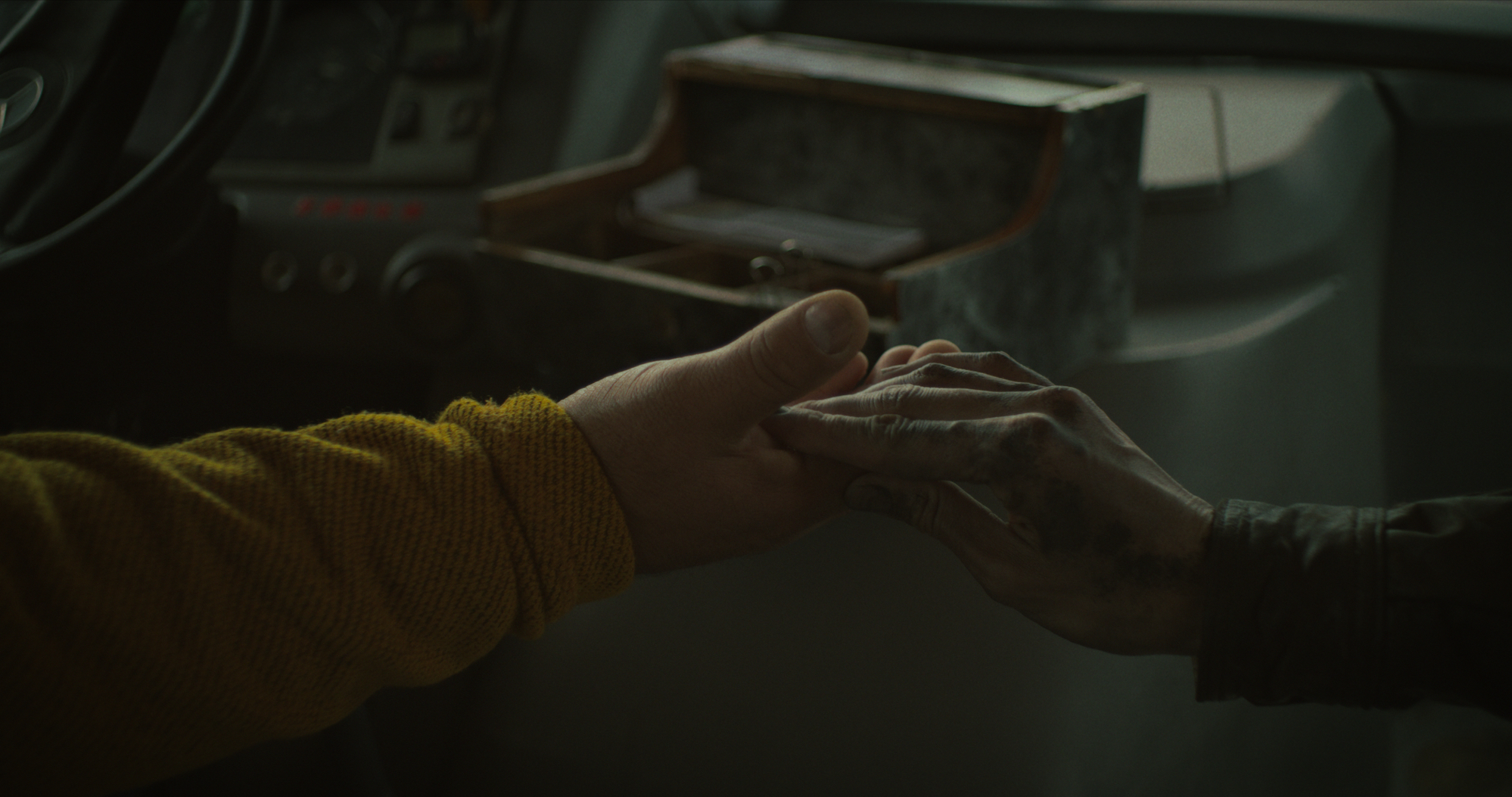 A still from Francisca Alegría’s “The Cow Who Sang A Song Into The Future” (2022). Photography by Inti Briones.

Alegría reveals that building the film’s relationship with nature meant offering something in the way of closure, or at least a way for her characters to make amends with what is inherently irreconcilable about the fragility of our existence. “There are scenes that could have gone very dark. But [the characters] end up understanding that even the most sorrowful emotions can be transformed into something else.”

The film also places us inside the relationship between Cecilia and her daughter Tomás, a trans woman who Cecilia refuses to acknowledge as such, insisting that she move on from what Cecilia has dubbed a phase. Her reticence to accept Tomás for who she is comes less from a place of prejudice than it does from her inability to understand Tomás’ desire for emotional and spiritual clarity in her identity. “That’s the only way she can mother,” Varela says. “The impact of my [character’s] encounter with my own mother slowly starts to unravel [her relationship with Tomás]. And that path is also very universal. The path of forgiving.”

Over the four years that Alegría spent developing the film with her co-writers and cast members, the team grew exceptionally close. At one point, Mia Maestro, who plays the resurrected Magdalena, notes, “I feel like the three of us grew as women, and as friends and a community of artists. It was this beautiful experience where fiction was accompanying life.” Magdalena has an inexplicable effect on electrical appliances and appears to emanate some kind of infectious energy, even when completely silent. The character doesn’t say a single word throughout the film, and Maestro’s expressive performance makes it so she doesn’t have to. 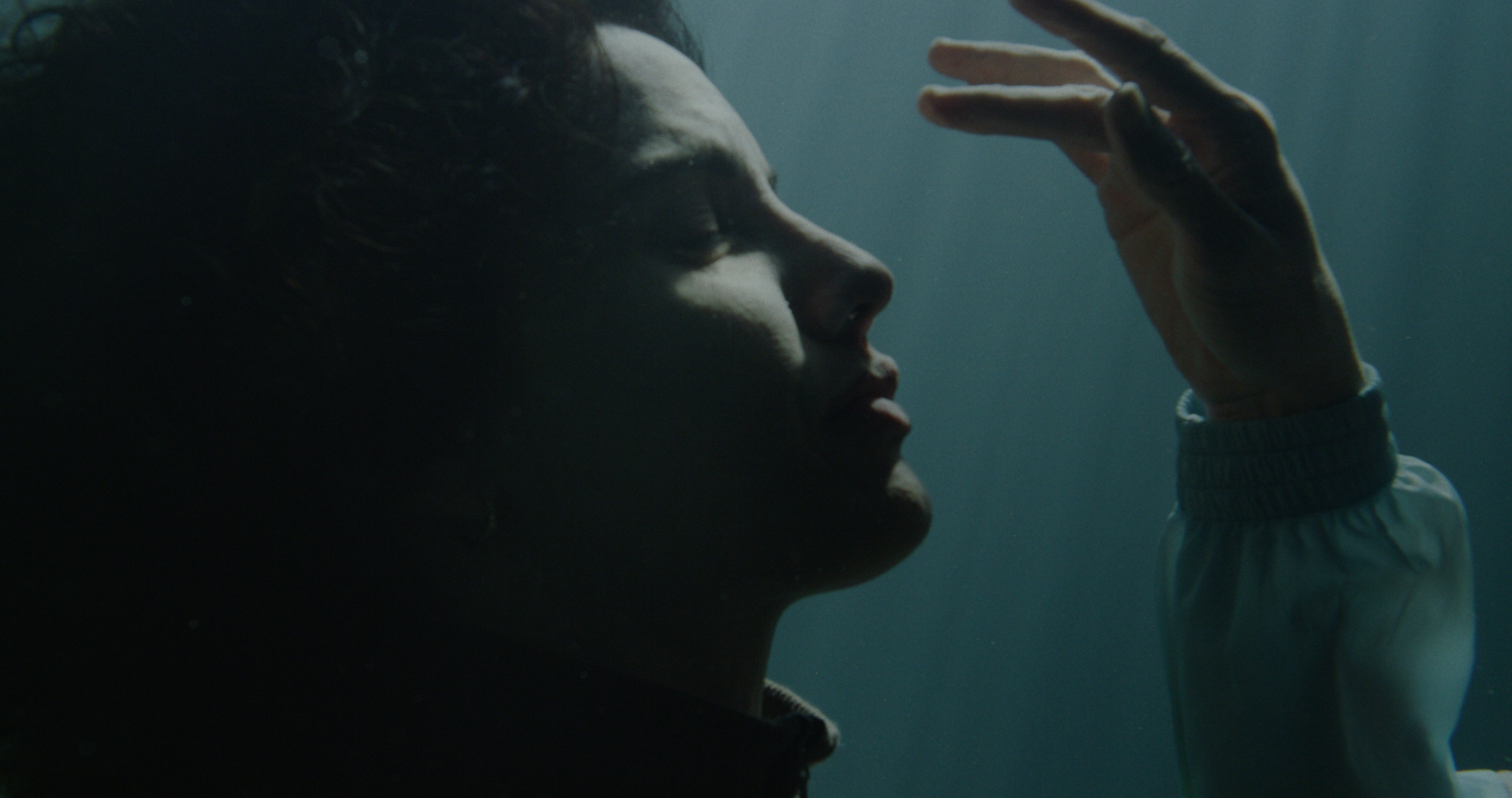 The Chilean actress Leonor Varela as Cecilia in Francisca Alegría’s “The Cow Who Sang A Song Into The Future” (2022). Photography by Inti Briones.

“The Cow Who Sang” confidently poses the kinds of questions that don’t really have answers through its uniquely ethereal and hypnotic visual language. Why are we here? Where do we go? How do we get out of bed every morning knowing we’re going to die one day? Among the bigger existential musings are the circumstances surrounding Magdalena’s resurrection. Dead fish sing, eulogizing their own kind as martyrs of nearby polluters. Magdalena, still wearing the motorcycle helmet that drifted below the river’s surface with her, bursts through the water, dazed and disoriented. The reasons for her return are left ambiguous — she didn’t ask to be reborn, and nobody else was asking for it, either. Whether it’s a blessing, a curse, a warning, or a miracle, Maestro affirms that Magdalena, above all else, has “this incredible opportunity to make amends.”

Magdalena’s reintroduction to the world of the living takes a special kind of toll on Cecilia, who’s no longer able to fall back on the coldness that has allowed her to survive in the wake of her mother’s death. As if she were experiencing all five stages of grief simultaneously, Cecilia cycles from one extreme to another. At first, she barely conceals her deep rage for her mother’s absence. followed by her complete disbelief towards her mother’s return. Finally, she reaches overpowering acceptance by the end of the film, when she almost drowns precisely where her mother did.

Cecilia’s journey throughout the film is ultimately one of acceptance for each member of her family and herself. Trying desperately to be the mother that her own mother never was, Varela identified with Cecilia’s struggle for perfection in a deeply imperfect world. “I know, as a mom, that you’re gonna mess up. That’s a given. All parents just have to come to terms with that.” Cecilia’s refusal to accept that reality is what sends her down the path of repeating her mother’s mistakes, alienated from her children and trapped inside her own mind. “As you mature as a mom, you realize you just can’t [always protect your kids] and, at some point, you’re going to f— up.” 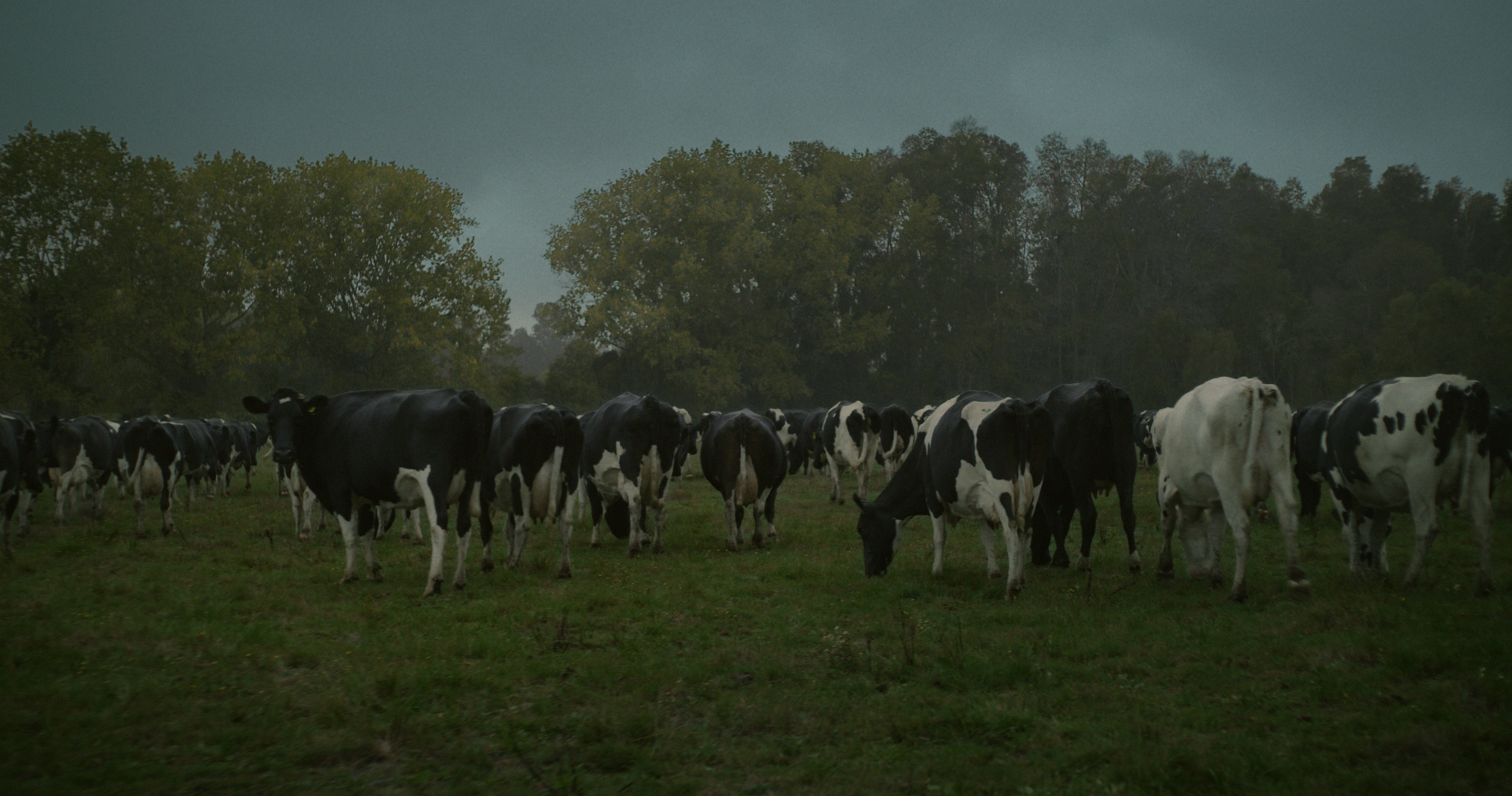 A still from Francisca Alegría’s “The Cow Who Sang A Song Into The Future” (2022). Photography by Inti Briones.

Still, “The Cow Who Sang” doesn’t leave Cecilia saddled with her trauma in the same way she is when we meet her, as evidenced by a tender, mournful encounter with her mother in the film’s final moments. “I love the place where Cecilia ends up in the movie,” Varela says, “which is a place of deep acceptance. And just embracing who her kids are and who she is. I think that’s what we strive for.” Maestro adds that this was always Alegría’s intention. “Francisca’s idea for this story was always with the understanding that there was never a lack of love. It’s just people doing the best that they can.” So when Cecilia and Magdalena finally come face-to-face, under the warm embrace of the river that took Magdalena all those years ago, there’s an understanding between them that our parents are not the superhuman providers that we all so desperately want them to be. They are people, just like us. They make mistakes, just as we have. And eventually, they will die, just as we will.

Despite its refusal to obscure the existential dread each of Alegría’s characters carry with them, the film ends on a note of hopefulness, and Alegría herself feels similarly. “We end up with a world that is wounded, but we can heal together. Trauma has healing, and it’s an ongoing process. It doesn’t have an end, so it’s not the end of the world.”