Thirty years ago, Madonna shocked the world when she freely expressed her sexuality through her book “Sex” and the album “Erotica.” The Queen of Pop knows how to spot a pop provocateur (like herself) when she sees one, so this year she started collaborating with Dominican artist Tokischa. Like Madonna, Tokischa is pushing boundaries for women in Latin music with her sex-positive lyrics, all while bringing Dembow, the underground sound of her country, to the forefront.

“I feel like we’re on the same path, in a different timeline, but [dealing] with the same mindset of people who are against this idea that we have of expressing ourselves,” Tokischa tells LATINA over Zoom from her home in the Dominican Republic. “[Madonna] always says this phrase, ‘It’s a tough job, but somebody’s gotta do it.'”

Watch Madonna and Tokischa’s modern dembox remix of “Hung Up,” one of Madonna’s greatest hits.

Since last year, Tokischa has helped the Dominican dembow genre go global. The rapper and singer has been tapped by artists like Colombian superstar J Balvin, Spanish singer Rosalía, and most recently, Madonna, for collaborations. Through her music, concerts, fashion and Onlyfans account, Tokischa has empowered women and her fans in the LGBTQ+ community to celebrate themselves and their sexuality freely. Onlyfans was a key source of income for Tokischa at the start of the COVID-19 pandemic and it’s a platform she continues to use to fund and run her career the way she wants to.

“I really love to make that explicit content because it’s part of my art,” Toksicha says. “It’s part of the creativity that I have, which helped me when COVID came. When everybody was locked down, I was able to make money from my Onyfans and use that to invest in my career.”

Last year, Tokischa shocked the Latin music world when she stepped on the red carpet of the 2021 Billboard Music Awards dressed as a vagina. She called herself “La Santa Popola,” or “The P*ssy Saint.” As Tokischa becomes more mainstream, so is the Dominican slang like “Popola” that she uses in her lyrics. She boasts about the power of the “popola” in the frisky “Perra” with J Balvin and the femme power anthem “Linda” with Rosalía.

While Tokischa proudly represents her Dominican culture in her music, at the same time, she’s faced institutional pushback in her country for her artistic expression. Her 2020 song “Desacato Escolar,” about her hard partying days in high school, was denounced by the Dominican Ministry of Education and was temporarily removed from YouTube. Last year, Tokischa ruffled the feathers of the local government and church when she took semi-nude photos at the sanctuary of the Virgin of Altagracia in La Vega, which resulted in fine and mandate that the artist release an official apology.

Earlier this year, Tokischa was tapped by DJ hit-maker Marshmello for “Estilazo.” In the EDM banger, she sings about celebrating the LGBTQ+ community she’s a part of as a proudly bisexual artist. The wildly cheeky music video depicts a man lives his best life when he dresses in drag and joins Tokischa at the club. With uninhibited visuals and lyrics like “larga vida homosexual,” she is knocking down barriers for many marginalized folks with her music and videos.

Back in June, Tokischa celebrated LGBTQ+ Pride month with Madonna. The two artists made out as they performed a dembow remix of Madonna’s hit “Hung Up.” In September, Madonna finally released the music video for their steamy collaboration. Madonna partied with Tokischa in Washington Heights, New York’s predominantly Dominican neighborhood. They once again kissed each other in the midst of the madness.

“It’s one of my proudest moments!” Tokischa recalls. “It was such a moment to share with her and to to talk to her and have her as a friend, because she’s very honest. She’s very sweet. She’s so nice and every time I reach out to her, she’s always there for me, so I’m really thankful for that.”

Tokischa also recently caught the attention of another superstar, Boricua golden boy Bad Bunny. Right after she finished performing a sold-out concert in LA, he flew her out to the Dominican Republic to perform with him on his World’s Hottest Tour the following day. Bad Bunny brought out Tokischa to perform his global hit “Tití Me Preguntó.” She came back for an encore to sing a bit of her hits “Perra,” “Estilazo” and the dembow romp “Delinquente.” 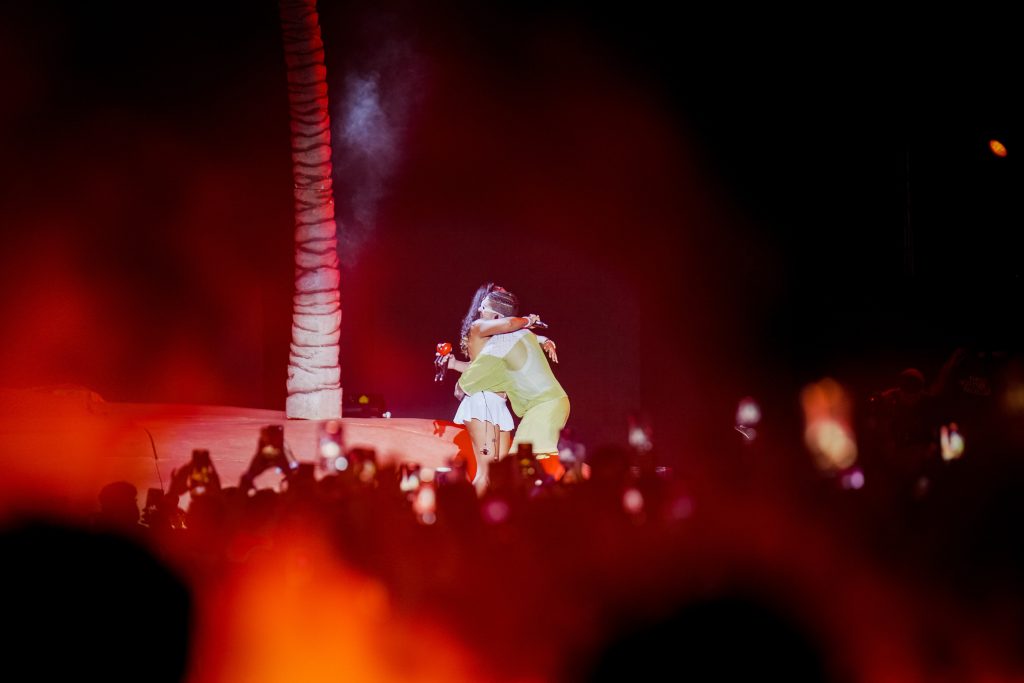 “He’s so sweet!” Tokischa says. “His vibe is beautiful. He’s very special. When the fans were calling me after I left the stage, he told me to go back onstage. That’s why he’s the number one [artist] in the world because he’s so humble, he’s so down to earth, and he’s passionate about it and he’s doing it with love. It was really fun! It was worth it.”

Tokischa recently wrapped her first U.S. tour and now she will be heading into the studio to work on her highly-anticipated debut album. In addition to producing dembow bangers, she also returned to her Latin trap roots in “Hola” with Eladio Carrión, and “Kilos De Amor,” a Mexican corrido with Natanael Cano released earlier this week. There are no limits to Tokischa’s artistry, sound and expression.