Though we were originally supposed to meet at his office in Mott Haven, director Fred ‘Focus‘ Lavergne and I ended up talking at his Bronx apartment, a modest, minimalist duplex. Lavergne, who is Dominican and Black, is the CEO of Spacedog, a production company most well-known for directing Nike’s Air Force One commercial. The director’s first brush with mainstream popularity came in 2018, when he directed the video for Flipp Dinero’s hit single, “Leave Me Alone.”  Through this video and others like it, Lavergne has cemented his role in popularizing a cohort of New York MCs.

When I mentioned that I liked the sweater he was wearing, Lavergne told me, “There’s this brand called Barriers and this other brand called Murder Bravado. They did this collab.” The sweater is a beautifully designed answer to Mount Rushmore, offering its wearers a majestic quadriptych of Black history. Sprawled across the sleeves and chest are mosaic portraits of Marcus Garvey, Malcolm X, Martin Luther King Jr., and Frederick Douglass. Lavergne, who was born in the Dominican Republic and spent summers there as a kid, understands that many people are unaware of the intersections that comprise his background.

“It’s tricky because I identify as Afro-Latino. But I also don’t like labels,” Lavergne said, “It’s just a box within a box within a box. I hate it because we’re just humans. We’re one thing.” With a devilish smile on his face, Lavergne told me, “I think that’s really gonna click when the aliens come down and are like, ‘No, we’re different, motherf—ers!’” Despite his ability to bring levity to the situation, Lavergne sees how Black and Afro-Latino communities are often ostracized from larger societal and economic opportunities. “I’ve had the privilege to travel in the Caribbean and through a lot of Latin American countries,” he continued, “I see how the Black population is, for the most part, separated from the rest of the country.” 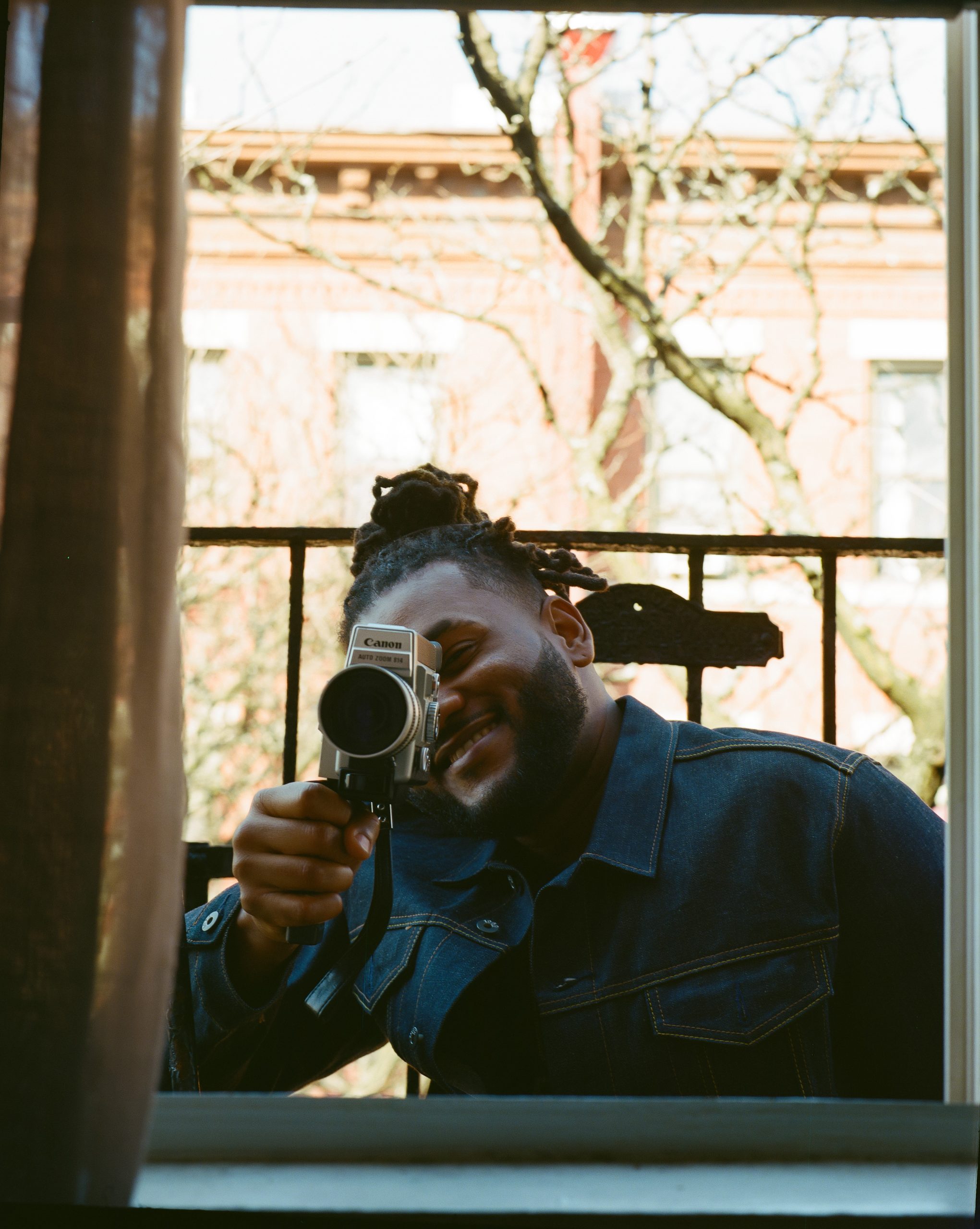 Despite this exclusion, Lavergne noticed that culture still trickles towards the mainstream. “[Afro-Latinos] are a piece of this, and we’re a big piece of it, quite frankly. You hear it in the music and you taste it in the food.” Seeing these communities for himself during trips to the Caribbean, Lavergne was struck by a societal willingness to reap the benefits of Afro-Latino culture while the people responsible for it remain impoverished. “When I visit some of these countries and towns where the Black people reside,” he explained, “It’s hard for them to get identification or go to the consulate and just do simple things that they have to do.” It’s a driving force behind his creativity, to help give a voice to those who need it. “That’s when representation matters,” he told me, “We’ve gotta make it political because some people are being left out of the conversation and of the benefits of even being here.”

Identity is central to Lavergne’ work, even if the boundaries of that identity often blur. The director acknowledged that nothing about his Afro-Latino heritage is cut and dry: “It’s complex. You look African-American, but you’re undoubtedly also Hispanic,” he said, “It’s like, I’m speaking Spanish at home, eating Spanish food, I live in a Hispanic neighborhood. But I am Black in America.” For Lavergne, the way these identities are balanced side-by-side is met with misunderstandings from every direction, and said, “You also find, sometimes, that it’s almost like you’re not Black enough or Hispanic enough or American enough. But in reality, you understand all these facets the best.”

Though Lavergne sometimes struggles to know where exactly he fits on this spectrum of identity, he celebrates who he is, and said, “I think there’s power in being Afro-Latino because there’s all these intersections you’re familiar with.” Translating that to his work, Lavergne knows there’s still a way to go before Afro-Latinos are appreciated on the world’s stage. He told me, “The representation just isn’t there yet. So it’s almost like you’ve got to make sure people know you exist because our plight is complex.” 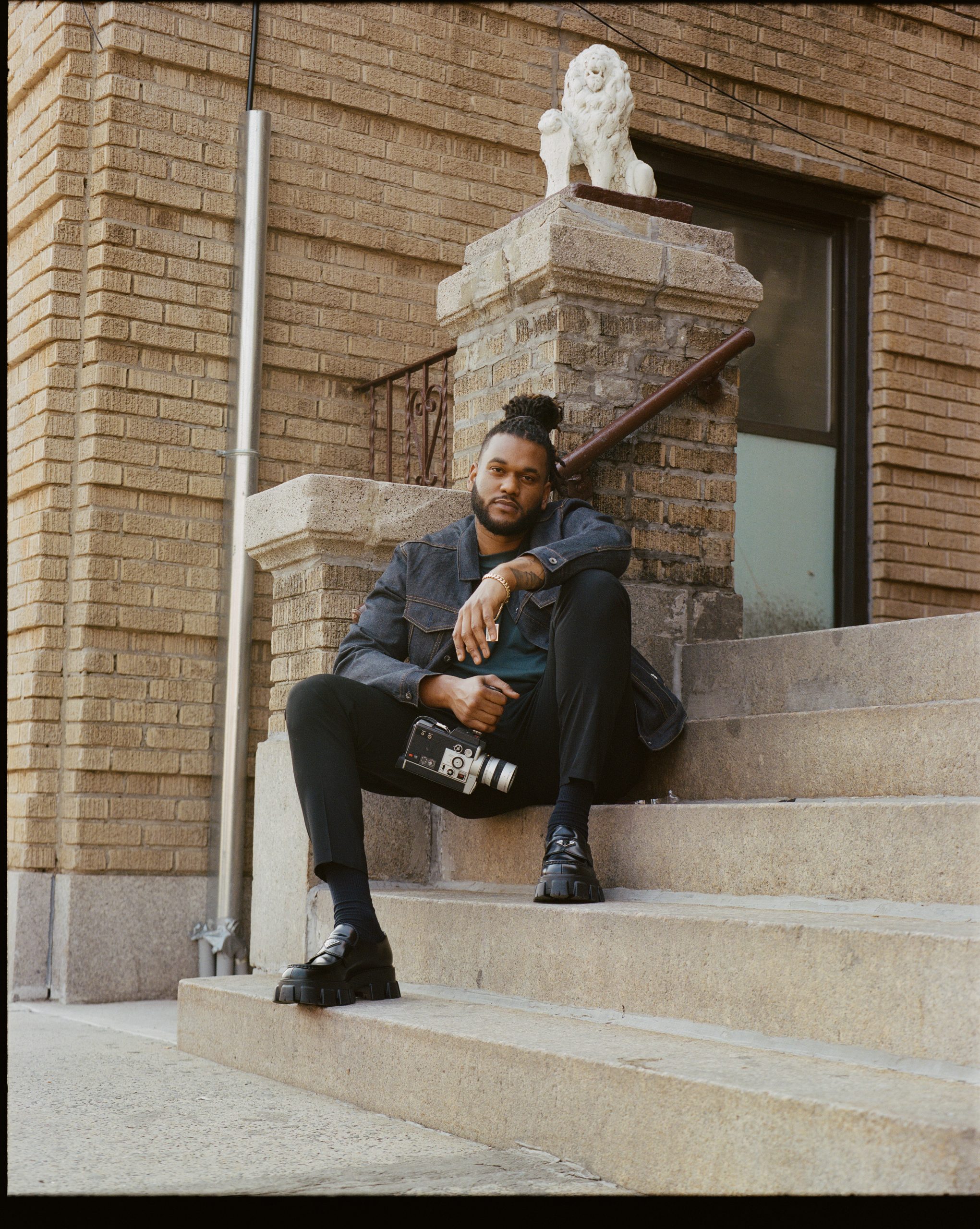 As far as his passion for art, Lavergne claims that his journey to cinema began with poetry: “That grew into songwriting and then singing and then executive producing music for people. But I always saw what I was thinking visually and I think that just grew into directing.” At a certain point, he realized he preferred to film the music of his peers rather than making his own. “I come from a very musical family,” he told me. “I had a lot of cousins in music so I used to just direct their videos.” Soon enough, Lavergne and his team of collaborators were attracting talent from around the community, “We were all around the same age and all doing creative things, and I think we kind of created this vessel that more and more people gravitated towards,” he told me.

Lavergne cited Spike Lee as an influence, not only on his work but on how he navigates the entertainment business. “He was able to direct commercials and movies and design sneakers, and have real relationships with the talent,” he explained. “And most importantly have his own production company and hire his own f—ing people. I love that.” It’s an approach Lavergne has adopted in his own work, especially when it comes to representing his home. “He shot most of his shit in Brooklyn, areas that he knew about. I’ve shot the majority of my productions uptown and in the Heights. I was the first director to bring Dave East up there. I got DJ Drama up there, Flipp Dinero. The list goes on,” he told me proudly.

Many of these artists can now charge five- and six-figures for just a verse, but it was their passion for the art that drove Lavergne and New York’s latest class of MCs to collaborate and create something together. “A lot of the relationships I formed with these artists were when we all still needed each other’s help. It was really about our love for what we were doing, and there wasn’t really a dollar amount tied to that.”

Lavergne’s big break came at the height of rapper Flipp Dinero’s popularity in 2018 when he directed the video for the artist’s “Leave Me Alone,” a single that went on to quadruple-platinum status a few months after it was released. “That shoot was hectic,” he confessed. “It was fast-paced. We did the best we could and I think it just translated. [Flipp and I] made history together. That’s, like, cemented now. We got a plaque for that.” Three years later, the video is still one of the more distinctive releases of the late trap era.  Deeply rooted in the traditions of New York hip-hop, it also functions as an extension of those traditions, boasting the kind of hyper-stylized editing and exaggerated framing that has only risen in popularity since “Leave Me Alone” dropped in 2018. 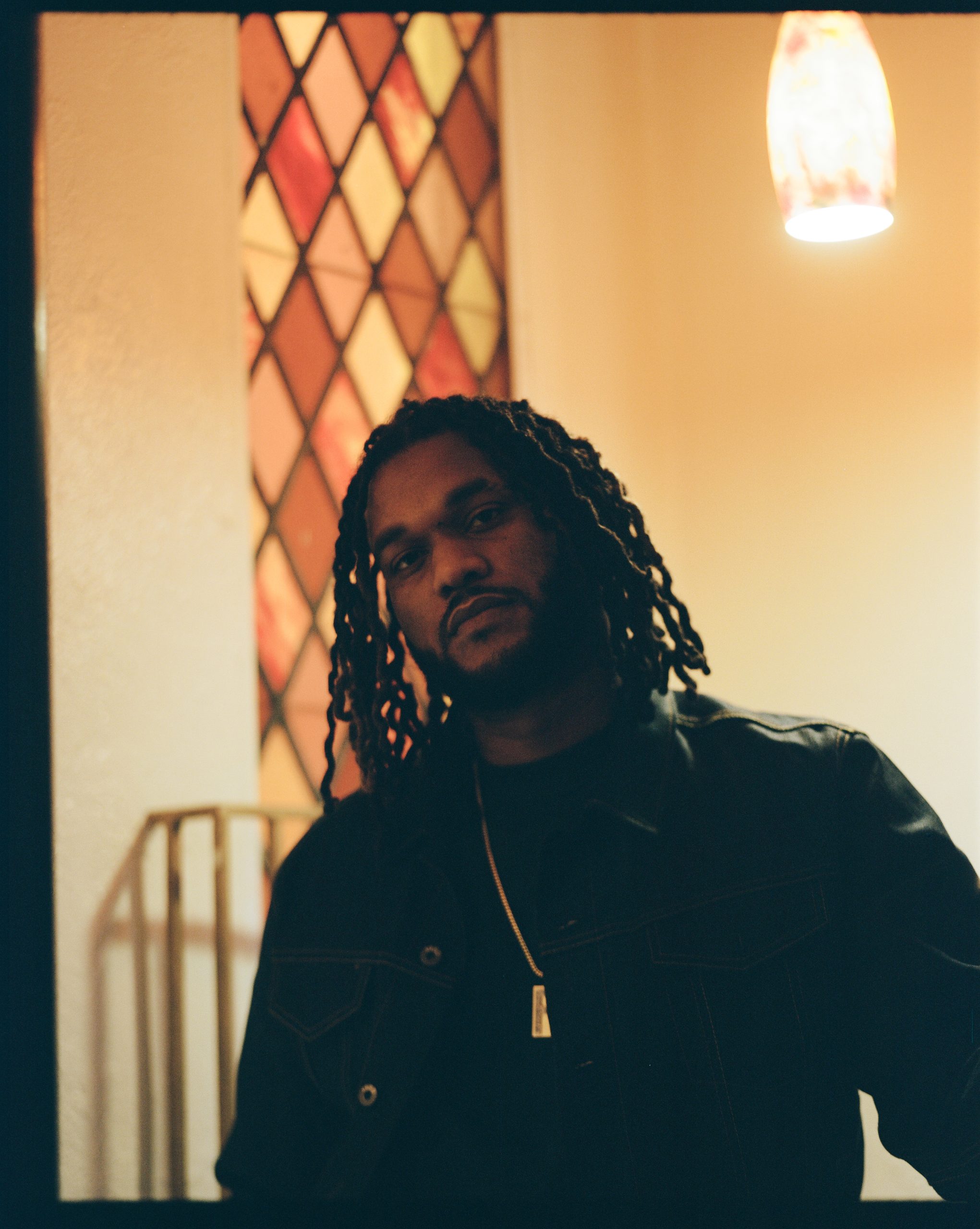 The director prefers to develop concepts with the artists and allows for any kind of inspiration to start the creative process. He explained, “Sometimes they’ll just text me that they have an idea and I’ll build on that. Sometimes they’ll send me music and I’ll sift through the songs I like and go from there.” Lavergne hopes to buck the stereotype of the megalomaniac director by encouraging collaboration and creativity from his crew, he told me, “I think directing, in general, is a collaborative sport. You want to be in charge but also let people be creative within their space. It’s already around your vision so you don’t need to reiterate that in too many ways,” he added, “the communication has to be there.”

Before long, Lavergne knew his run-and-gun style of filmmaking needed to evolve into something more. “I come from that class of directors where we shoot, we edit, we do all of it,” while acknowledging the fact that “there comes a time when that’s working against you, and you kind of start realizing which part of it you love more than others.” The crossroads at which Lavergne found himself is what ultimately led him to choose the craft of directing and launch Spacedog with a team of like-minded creatives. “I wanted an editor who loved editing as much as I love directing and creating concepts. I want to bring in people who love the other positions just as much,” he said.

Lavergne knows he needs a dream team; finding collaborators you trust is crucial to making it anywhere in entertainment. “I think if you really want to compete, you’ve got to come through with a good team. The monsters are out there and they’re playing ball,” he told me when we met. His approach prioritizes his team and cuts out the ego; their success is his and vice versa. “I feel like I learned that early on,” he said. “I’ve never been super egotistical about my shit. Everyone is capable.” For the director, that applies not only to the industry but the work he does within his community between shoots. 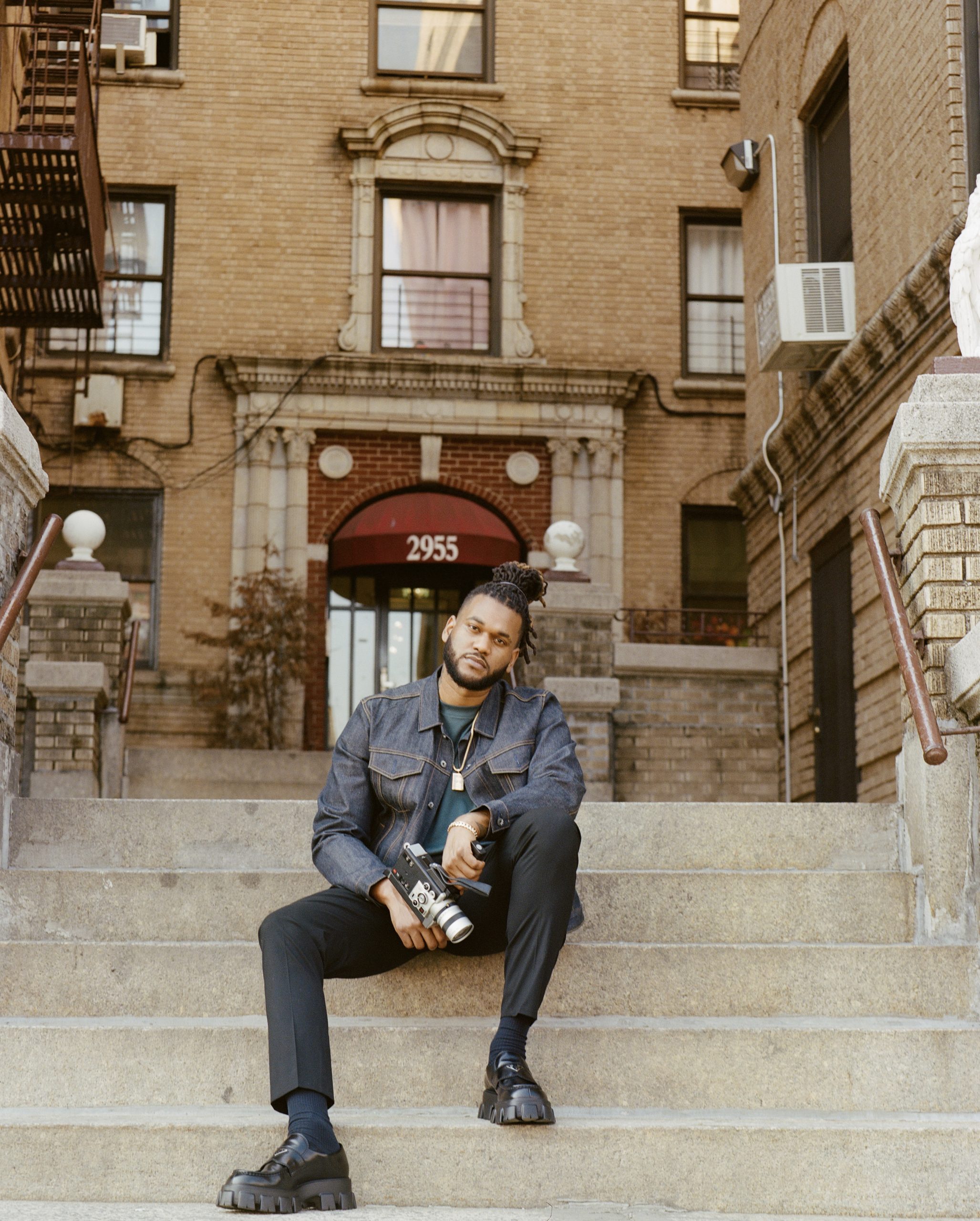 In addition to directing, Lavergne dedicates time to working with kids in Bronx public schools. He explained more about it and said, “I taught a course here in the Bronx about two years ago called Hip-Hop Therapy for sixth, seventh, and eighth-graders. We were just trying to get them to understand that there are a lot of roles to fill in these industries.” When many public schools are continuously forced to cut extracurricular activities, programs like the one Lavergne developed are a way to reclaim some of what’s lost. In this case, it’s helping kids find a path to their dreams in ways they may not have expected. “It’s not just the basketball player or the actor or the singer. You can be the songwriter or the engineer, the physical therapist, the agent,” he said excitedly. “There are so many pieces to the puzzle.”

With his eyes toward the future, Lavergne plans to continue similar kinds of mentorship programs while working to build his repertoire as a director of music videos, commercials, shorts, and eventually feature films. He sees this as a joint effort with his dedicated team of collaborators, and the young creators he’s inspiring through his work in Bronx’s schools: “It takes a village to do everything. I feel strongly about that.”