When Mexican-Canadian filmmaker Gigi Saul Guerrero was just seven years old, she visited a Blockbuster in Mexico City and discretely plucked a “Child’s Play 2” VHS off the shelf, careful not to let her mom see. Chucky, the demonic doll, glared menacingly on the cover. It was enough to cause concern. After all, she was not allowed to watch scary movies. But Guerrero was not a stranger to horror. Every day after school, she would watch family-friendly cartoons and slapstick sitcoms like El Chavo del Ocho. Secretly, the filmmaker would also watch televised plastic surgeries. Something about corporeal transformation fascinated the young Guerrero, eliciting in her a sensation she longed to understand. If death was so readily present around her, like the dead people she saw on front-cover newspapers riddled on street corners, then why was it so prohibited?

Once Guerrero watched “Child’s Play 2,” she got a taste of the unnerving sensation being scared can cause—paranoia, anxiety, and an irrational yet unsettling feeling that the “bad guy” is near. Her mom quickly found the VHS shoved haphazardly between Guerrero’s stuffed animals. She noticed right away that Guerrero was suddenly scared of the dark and that something was looming on her mind, like a psychological apparition.

“It’s not that I got scared at a young age watching that, I just didn’t understand what scared felt like,” Guerrero tells Latina. “I had no idea a horror movie can follow you home.” 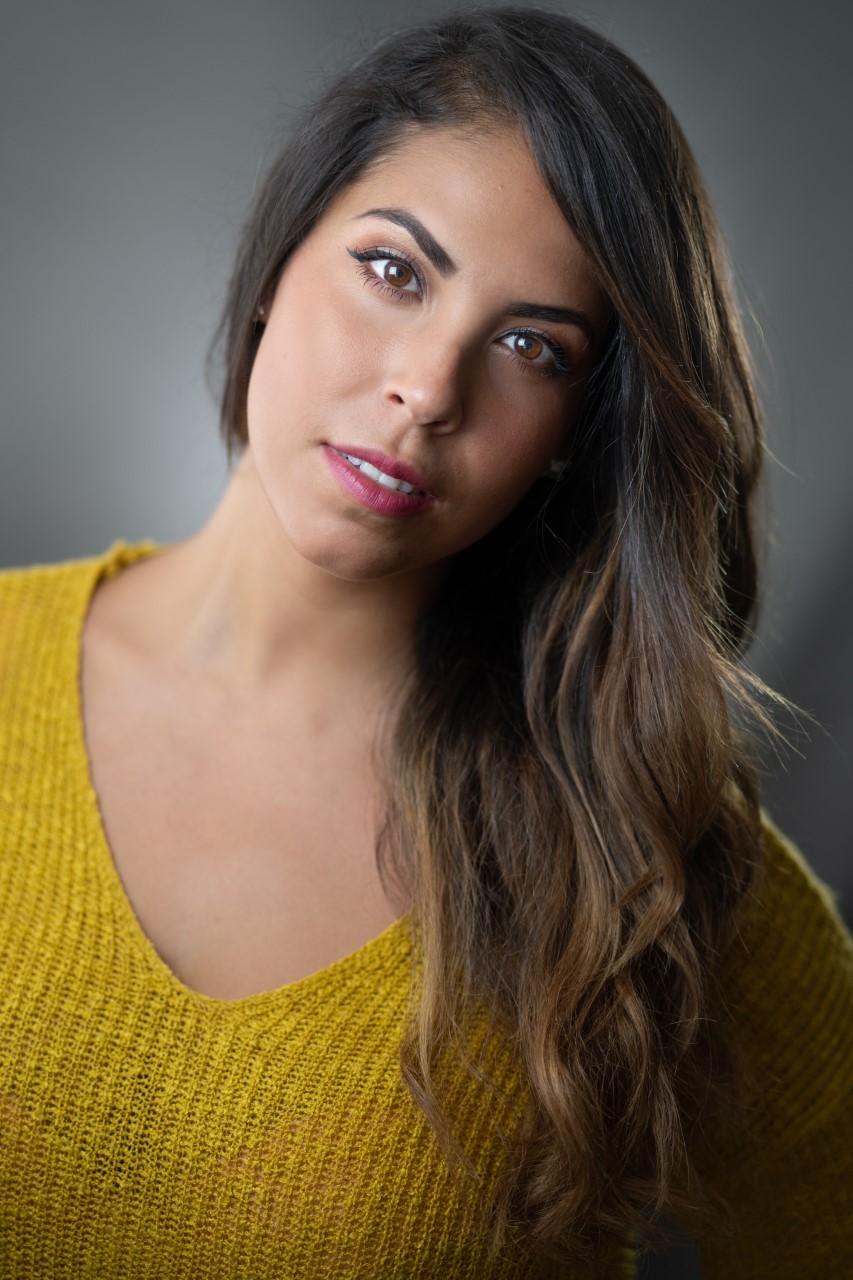 Guerrero has spent her career chasing that feeling as a horror film director, subverting the genre known for scream queens and infusing an acute sense of culture and social commentary. Guerrero has gained recognition for her work directing television episodes of  “The Purge” (2019), “La Quinceañera,” and “Into the Dark: Culture Shock,” the latter of which depicted a portrayal of the border crisis. It is no surprise that her unapologetic dedication to narratively rich storytelling has attracted her to the likes of horror giants at Blumhouse Productions. Last week, Guerrero’s feature-length commentary on gentrification and ode to viejito power, “Bingo Hell,” premiered on Amazon Video. We sat down with “La Muñeca del Terror” to discuss the film, her influences, and the power of Latinas in horror.

This interview has been edited for length and clarity.

Let’s make something clear, [us] Mexicans, we don’t steal. We just borrow [things] for a long time. So I borrowed the VHS for a very long time and never gave it back. Yes, it’s pretty much the same thing.

What was the first thing to pique your interest in watching a horror film? What intrigued you about the horror genre?

I couldn’t understand as a kid, but I loved that [feeling of horror]. Today, I still implement that influence: a scary movie can follow you home. I think it applies in many ways because now horror is so elevated that you can [inject] social commentary. You can [address] topical themes but obviously, throw in witches and monsters and blood. What we see in the news is already scary enough and making people suffer 90 minutes is unfair. So why not make people have fun with it? The movie will follow [the audience] home afterward and [people] can have a really good and interesting conversation at the same time.

How has being Mexican influenced your filmmaking? Especially since you deal with horror and subjects that are kind of taboo in mainstream filmmaking…

The master of horror, a Mexican man himself, Guillermo del Toro was asked a similar question when he won the Academy Award for “Shape of Water.” He was asked: where does this inspiration come from? And he said, “I’m Mexican.”

He couldn’t be more right. I think especially in Mexico, [and perhaps throughout] Latino culture, we are just not afraid of death. We celebrate it, we embrace it, we cherish it. We even have cults of it, like Santa Muerte. We even have one of the most beautiful holidays, Dia de los Muertos, which is one of my favorites. We just embrace [death] as another chapter. That’s why we’re able to talk about these stories.

In “Bingo Hell” the protagonist Lupita is an older woman. Why do you think it’s important to feature atypical protagonist perspectives?

We haven’t seen seniors helm the lead role or be the hero in the genre film since way back in the day. Films from the ’70s like “Batteries not Included” or “Cocoon” show viejito power fighting evil. These are the kinds of movies that break stereotypes of the weak and old. How many older folks do we know that have suffered through gentrification, lost control, have no voice, and have [been victimized by] scams of greed?

[Consider] the perspective of an older generation like Lupita and Dolores her best friend: not even money can break their strong friendship apart. Money can’t break a community like Oak Springs apart and that’s the message of this film. “Bingo Hell” [addresses] very topical themes such as the strength of community, greed, and gentrification, but now through the perspective of seniors. It’s really exciting because of course, who are the most honest and stubborn people on earth: our grandparents, the lady next door with all the cats. That’s what gives this movie that unique and organic charm.

It’s a big responsibility to be honest with yourself as a filmmaker. If you understand the perspective of where the movie’s coming from, then you’re going to make the right choices. A film like “Culture Shock” talks very intensely about the border crisis. The script originally was very safe and [missed] the authenticity and the reality of the border crisis, the true horror of what is happening.

There was no sugarcoating any of that. Sometimes you have to make those choices of how far can you go with a message? With a film like “Culture Shock,” I needed to be very obvious about what is happening. I felt that was my contribution as a Mexican to talk about [the border crisis]. Since my voice is small, why not put it in a movie that would be seen everywhere?

With “Bingo Hell,” my partners wanted that perspective from kids that would get dragged to the bingo hall. I was the one that said this movie needs to be told from the seniors’ [perspective] because they too have a story [to tell] and they know a lot more than us. You see characters that are so strong that refuse to change [and gentrify] their community.

What are some things that scare you?

I think humans are the scariest things on earth. I think we are capable of too many things. I get scared of films like “The Purge” or anything that is very human. I believe in ghosts, I’m super superstitious. Do not put the Ouija board in front of me because something will go down.

One of the funniest experiences I had on set occurred while I directed an episode of “The Purge” TV series. One of the big scenes takes place at a cemetery. I was the only person on set that came with holy water prepared. I went to the church in that location and I [prepared] a little Tupperware of holy water. No one was afraid. I was the only one sprinkling it, saying, sorry, we’re here. Sorry, we’re stepping on your grave. I was just terrified. I don’t want to open a portal. Maybe one day I’ll make a supernatural film, but I don’t know if I’m ready yet.

Are there any stories that you are dying to tell moving forward? Would you ever deviate from the horror genre?

The movie that made me go to film school was “Children of Men.” Films like [that one] talk so much about the reality of our society and the flaws of humanity, if you will. It’s my goal to one day get to that level. On the one hand, I’m loving the horror genre. I think there’s so much fun to it and there’s so much to say. On the other hand, I do voice acting for a lot of kids’ cartoons. [It’s] the only thing my mom will watch.

Do you find a sense of comfort in telling horror stories?

Horror films bring us escapism from the realities that we have to face every day. I think that’s what makes them so important and so much fun is because we can relax and lay back. It brings us together. They’re the perfect date movie, right?

How do you go about making sure that a horror film does not just scare, but also balanced with rich character development and narrative?

I think you need to be able to see yourself in the film. If you can fully relate to either the situation and the characters, then it’s going to feel authentic. The first key is to trust your own story and understand it. It was really fun creating “Bingo Hell” with seasoned actors who are so open to strapping the camera literally to their waist or letting our cinematographer Byron be so close to their face in many moments. If the actors feel a sense of dread or claustrophobia, it’s going to portray well in the film.

Latinos are among the largest fans of the horror genre. It’s a responsibility to continue to challenge audiences. Not just for the Latino community, but to the point where now movies like Parasite are winning the Academy Award for Best Film. Who knew a subtitled Korean film would do that? I don’t think that would have been possible only five years ago.

If we continue to embrace authenticity and diversity, then we’re on the right path. But, we can’t do that if we, as filmmakers, don’t spread the word. So if I’m the Latina that isn’t right for a project, I know three other Latinas who are and will share their names. That way, I’ll keep the door open for who’s next.

How did the nickname “La Muñeca del Terror” come about?

No idea! It became a fun hashtag for me in Mexico and I couldn’t resist ignoring it. It’s an awesome name!

I saw that you posted about your Abuela’s health, that you will be going to Mexico soon to watch the film with her. I hope that she has a quick recovery and that you have a safe trip. What does she think about your films and how do you hope to honor her through your work?

I think it’s a beautiful blessing and sign that I get to show her this film in person. She will be filled with surprise. The biggest one is that she will see her favorite actress Adriana Barraza portray her in the movie. I can’t wait to see her face[light up with joy]. Sometimes we get so caught up with work and other things in life that we suddenly miss out on important moments. I am glad I can take that moment now and be with her.