Born in 1948, Chicana feminist activist Jeanne Córdova devoted her life to advocating for lesbians and women of color in the United States. She was a key organizer of the first national lesbian publication, The Lesbian Tide, which began publication in 1970; the first National Lesbian Conference in 1973; and the first convention of the National Lesbian Feminist Organization in 1978. According to the Pratt Institute’s archives, she was also a founding member of many other gay rights organizations, including the Gay and Lesbian Caucus of the Democratic Party and the Los Angeles Connexxus Women’s Center/Centro de Mujeres, and she served as a delegate at the first National Women’s Conference in 1977. As Córdova would later explain: “I didn’t want my lesbianism to be just a matter of sexuality. I felt it was more political than that really.”

For Córdova, activism was more than a career, it was something closer to a vocation or spiritual calling. Shortly before she passed away in 2016, Córdova donated $2 million to the Astraea Lesbian Foundation to establish The Jeanne R. Córdova Fund “to support organizations focusing on movement building, human rights and journalism with a specific focus on Latina lesbians from South and Latin America and South African women — lesbians, feminists, lesbian feminists, butch and masculine gender-nonconforming communities.”

Córdova also published one final piece of writing titled “A Letter About Dying, to My LGBT Communities,” in which she reflected on her lifelong devotion to the fight for “freedom and dignity for lesbians.” Reflecting on her legacy and her monumental personal donation, Cordova recalled the earnest beginnings of her lesbian feminist activism:

“From the age of 18 to 21, I painfully looked everywhere for Lesbian Nation. On October 3, 1970, a day I celebrate as my political birthday, I found Her in a small DOB (Daughters of Bilitis) meeting. That’s when my life’s work became clear. Shortly thereafter I became a core organizer for two national lesbian conferences, one of which re-directed my path to create The Lesbian Tide news magazine, a national paper of record, as the historians say, for the lesbian feminist generation. And on it went for multiple decades of marches and later online organizing–this time intersectionally, to include all of me and my Latina identity.”

Growing up in a devoutly Catholic family, Córdova first came to understand her lesbian identity through her religious identity as she entered the Immaculate Heart of Mary convent in Santa Barbara, California shortly after she turned 18. “I chose the convent because I knew I wasn’t interested in the world of men and women, marriage, children — ’that’ lifestyle,” she would recall in a 2012 interview with the Windy City Times. “[…] I’m sure the fact that I fell in love with God at the age of seven and made a vow to dedicate my life to Him was much informed by my strong Catholic parents’ (one Irish woman and one Mexican dude) teachings, as well as my latent lesbianism.”

In 1985, Córdova published the essay “My Immaculate Heart” in the radical and controversial anthology “Lesbian Nuns: Breaking Silence,” in which she described her year as a postulant. “I arrived on Entrance Day wearing my James Dean wraparound sunglasses, sincerely believing that the warriorship of my patron saint (butch dyke Jeanne d’Arc) was spiritually motivated,” she remembered in her essay “Butches, Lies & Feminism” in the 1992 anthology “Persistent Desire: A Femme Butch Reader”. “I left the holy sisterhood one year later thoroughly edified by the carnal motivations and wraparound body of novice Sister Marie Immaculata. My boot camp in the sisterhood of the Immaculate Heart of Mary (detailed in my autobiographical novel, “Kicking the Habit”) did clarify my lesbianism.” Throughout her career, Córdova maintained that her postulancy played a vital role in the development of her later work as a trailblazing lesbian feminist activist.

“The movements for social justice in the ‘70s and ‘80s [were] replete with ex-nun lesbian leadership,” Córdova explained in an interview with the Los Angeles Times in 1985. “I have come to see the convent as a boot camp for us all.”

When Córdova left the Immaculate Heart of Mary convent, she was quickly elected president of the Los Angeles chapter of the Daughters of Bilitis, the oldest lesbian civil rights organization in the United States. While working as a community organizer, Córdova also completed a master’s degree in social work at UCLA and juggled a budding career in journalism, publishing columns in both The Advocate and Los Angeles Free Press in addition to her work as Editor in Chief of The Lesbian Tide.

Shortly after the publication formally split from the Daughters of Bilitis in 1972, The Lesbian Tide published “A Collective Editorial” in response to efforts in the San Francisco chapter of the DOB to oust two trans women members. Announcing unconditional support for the inclusion of trans women in DOB, the editorial read: “Our common oppression is based on society’s insistence that we perform certain roles: wife, husband, mother, father, masculine, feminine, etc. We cry out, ‘You cannot define us. WE DEFINE OURSELVES! […] Please advise our transsexual sisters that, if they are not welcome in the liberal city of San Francisco, they are most welcome in the city of Los Angeles.” Keeping to their word, The Lesbian Tide subsequently hired several trans staffers and correspondents through the 1970s and ‘80s, including photographer Sue Cooke and Beth Elliott.

Córdova remained a vocal ally to trans women. During the infamous 1973 West Coast Lesbian Conference, when a contingent of attendees and speakers including radical feminist Robin Morgan sought to prevent Beth Elliott, one of the two trans DOB members ousted the year prior, from performing at the conference, Córdova offered a “loud and strong” defense of Elliott, who was ultimately allowed to take the stage. 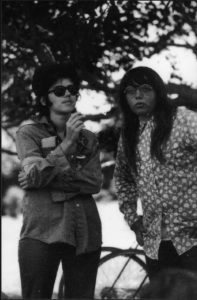 In the 1980s, Córdova also began publishing the Community Yellow Pages, the first national LGBT business directory, and shortly after founded another publication covering LGBT literature and culture, Square Peg Magazine. Córdova also published several of her own essays in some groundbreaking lesbian anthologies, including “The Lesbian Path” (1980), “Persistent Desire: A Femme Butch Reader” (1992) and “Dagger: On Butch Women” (1994). Lambda Literary awarded Córdova best “Lesbian Memoir/Biography” for her 2012 memoir “When We Were Outlaws: A Memoir of Love & Revolution.”

Córdova’s legacy as a trailblazing lesbian feminist activist has been preserved at the One National Gay & Lesbian Archives, the oldest continuous LGBT organization in the United States, where Córdova was elected Board President in 1995. Córdova’s extensive archival records remain vital documentary evidence of the rich and complicated history of the lesbian feminist movement in the United States.