“That’s why we’re here: to unlearn all the fucked up shit we were taught growing up.”

This quote is only one example of the many cathartic snippets from Love in Gravity – a new six-episode narrative podcast that sheds light on queer Latinx communities. The original stories from all six episodes aim to move our society towards empathy, increase acceptance, and reduce HIV stigma — all through the power of storytelling.

This show is a collaboration between production company Harley & Co, ViiV Healthcare (the only pharmaceutical company whose sole focus is on HIV prevention), and a cast of over 40 actors. These actors include Tik Tik Boom’s Robin de Jesus, On My Block’s Jessica Garcia, and Glee’s Kevin McHale. The series aired throughout July and closed with its final episode on August 3rd.

Because the stigma around AIDS continues to plague the Latin American community, ViiV Healthcare and Harley & Co decided to join forces and tackle the cultural boundaries that may keep many individuals from treatment and prevention. According to WebMD, language barriers, religion, and access to healthcare are among the factors that contribute to high positive HIV diagnoses among Latinos. ViiV reported that in 2019, 29% of all new HIV diagnoses were among Hispanic/Latino people. The goal of “Love in Gravity” is to start more conversations about AIDS, sexuality, and relationships so that Latin American families have the tools to stay healthy.

LATINA spoke to Love in Gravity Executive Producer Sarah Hall, actor Alexia Garcia, and writer Estevan on a group zoom call about their work on the podcast.

Sarah Hall explained that “[shaming] people for not doing the right thing doesn’t typically help them do the right thing.” For this reason, the Love in Gravity team worked extensively to tell stories that would not only educate the Latinx community about AIDS but also instigate understanding between members of the community who might have different perspectives.

They want everyone — from queer first-generation Latinos to white partners embracing a new culture to family-oriented gossipy tías — to feel seen and be moved by these episodes. According to Hall, the team’s motivating question was, “how do you use culture and entertainment to intentionally change culture and behavior?” As a result, these stories attempt to shift the perception of AIDS in Latinx households.

Many episodes include scenes where queer Latinx children confront their parents with truths they fear their parents will not accept or approve of, such as explaining dynamics of their relationships or sharing a positive HIV diagnosis. In most of these situations, the parents react differently than the child expected. For example, in Episode 4 (“Our Lady of the Six Train”), Lil is terrified of telling his mother that he is HIV positive and hides this diagnosis for years. When he finally shares this information with his mom — after a life-altering encounter with Jessica (played by Alexia Garcia) — he learns that his mother’s love overpowers the prejudices he thought she had. Instead of shaming Lil, his mother embraces her son and tells him she will love and support him no matter what. 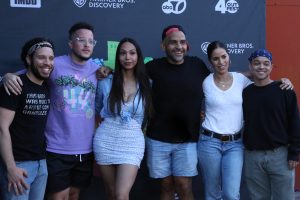 Actor Alexia Garcia, who plays Jessica in “Our Lady of the Six Train,” hopes that such scenes will instigate conversations within families and encourage children to share hard truths with their parents, even if they are afraid of facing their reactions. One of the writers, Estevan, said, “at the end of the day, there’s a lot of love to be had… and hopefully, these stories can increase that.”

Estevan and Garcia agreed that many Latinx families struggle to have intimate conversations about emotions, sexuality, and relationships and fear that this keeps queer Latino individuals from learning about HIV prevention and treatment, among other things. They hope that Love in Gravity will bring more awareness to Latinx families about uncomfortable subjects.

Estevan also hopes to share what he has learned from his own experiences. When he decided to open up his relationship, Estevan went on the HIV prevention medication, PrEP. He included this anecdote in his semi-biographical episode so that his audience would “know that there are Mexicans on PrEP. It’s not just for white gay men.” As a means of shedding light on cultural differences within families and the distinct ways to navigate them, he added a scene where the main character’s mother finds PrEP in his room and starts sobbing because she thinks he has AIDS.

Estevan loves that although Love in Gravity is a “niche-seeming series… there’s so much diversity within that intersection.” He is proud to be able to delve into the story of a gay Mexican man navigating an open relationship and appreciates every little detail. For example, the bird noises in the background during scenes set in Arizona are actually of local birds. In the last part of Estevan’s episode “Elote PrEParado,” the producers mailed elotes preparados to the actors so they could actually eat the Mexican treat while acting out a scene where the characters are enjoying that specific dish. “We tried to really be specific in order to be universal,” said Hall.

The attention-to-detail and specificity did not stop at sending their actors Elotes or researching birds native to Arizona. When it came to casting, the directors chose actors with specific accents to play roles that had those accents. One actor even got dialect training to perfect a Costa Rican accent.

While they focused on intention and authenticity with casting, the producers and casting directors did not typecast. For Garcia, a trans woman, this was her first role portraying a non-trans individual.

This show was also the first time Garcia acted on Zoom. Unlike many podcasts produced with all the speakers in the same room, Love in Gravity brought together actors from New York, LA, Mexico, and San Antonio. With their cameras turned off, the actors allowed the story to flow from them in a new way.

Understanding that the audience would only hear their words, pushed the actors to perform differently. For Garcia, this allowed her to immerse herself in the story. “It’s definitely a more free experience because you’re just using your vocal cords and your emotions,” she said.

From sex noises to rowdy family gatherings to heartfelt confessions, the actors’ voices transcend the listeners’ earbuds and place them into the scenes. Without visual distractions, listeners of Love in Gravity have the opportunity to truly put themselves in the stories and connect with the characters on a deeper level.