Muxxxe — a Third Gender Artist — and the Cemetery of Dreams

From a distance, border towns appear to be an attractive gateway to a better life. Yet, hundreds of migrants travel miles on foot — and risk their lives to get closer to the gates of “opportunity” — only to face the harsh reality of xenophobia and crushed dreams.

For Muxxxe, a rapper and artist, the border is drenched in illusions. Born and raised in Tijuana, Mexico, Muxxxe is no stranger to the impact of the border on neighboring towns. “I understood that the border, beyond being a geopolitical delimitation between two countries, is also a cemetery of dreams. I find it interesting that many people from all over, especially Latin America, come to Tijuana trying to cross [the border] with their dreams and goals, and instead get stuck here,” they shared.

Muxxxe, a third gender artist, has garnered wide attention not only for their androgynous-popstar-from-the-future look, but also as a subversive rapper and performance artist navigating themes of migration and displacement.

In 2019, Muxxxe staged an intervention series titled ‘ME RIO EN TU CARA’ (“I laugh in your face”) on the bustling Tijuana side of the U.S.-Mexico border. With nothing more than a portable speaker, wired mic and killer outfit (designed by them), they walked through border traffic and rapped explicitly about their sexuality over catchy reggaeton beats. Meanwhile, people in their cars, eloteros and vendors gagged at the fiery performance.

Another intervention titled ‘No Identificadx,’ (“the unidentified”), was staged on the Playas de Tijuana, where the U.S.-Mexico border wall meets the Pacific Ocean. Wearing a dress covered in 500 white ceramic crosses, Muxxxe honored people who have lost their lives crossing the border from Mexico to the United States.

Noting the intersection of border town identity and queer identity, Muxxxe shared the ways the Playas de Tijuana project incorporated different facets of their experience as a transfronterx artist. “I understand that right now I am located on the border,” Muxxxe explained of their geographical identity, “but as a queer, trans identity that inhabits this space, I am interested in speaking right from that place.”

Most recently, the visual artist debuted their first gallery installation in Mexicali at Planta Libre. Part of Muxxxe’s performance act, the installation is the first chapter of the series titled ‘Leyenda Negra: A Guided Tour Through the Cemetery of Dreams.” Funded by the Fondo Nacional para la Cultura y las Artes, FONCA, each installation will revolve around Tijuana and the archetypes that have come to represent the infamous city. 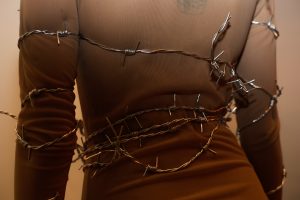 The first chapter features the ‘el mojado’ archetype, also known as the wetback. At Planta Libre gallery, the space was transformed into a visual representation of a desert, where many immigrants die attempting to cross the border. The performance consisted of three performers symbolizing the experience of ‘el mojado.’ A soft toned voice filled the room as it repeated inaudible words that echoed over an eerie soundscape. As the performers wandered slowly in circles — one holding a milk carton representing the essential water jugs immigrants carry on their journey to survive — the inaudible words become louder and clearer: 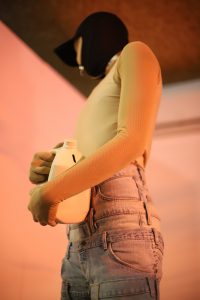 The echoing questions, heard throughout the performance, are part of a poem written by Marlon PV that loop over a soundscape created by Kid Robin, with visuals produced by Shiro Beta. The chilling words allude to the concept of ‘cemetery of dreams,’ the focal theme behind the series. Muxxxe comments on the hopes and goals of immigrants that die with them in their search for a safer and better life — the search for the elusive “American dream.”

Muxxxe harnesses multidisciplinary skills to curate every step of the process. From conceptualization to execution, the Tijuana artist usually has full creative control. But for projects like ‘Leyenda Negra,’ Muxxxe selected artists to collaborate with that share a similar vision and experience. 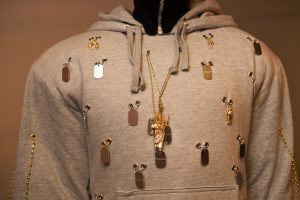 For the pieces ‘Blue-Collar Choker’ and ‘Wetback Hoodie,’ within the installation, Muxxxe collaborated with San Diego-based jewelry designer Georgina Treviño. Like Muxxxe, Treviño experienced life at the border — and the shared experience in this collaboration allows for a space where the two artists can complement each other creatively. Muxxxe also brought on a poet, a visual designer and a soundscape artist to fully immerse the audience into an experience of despair. 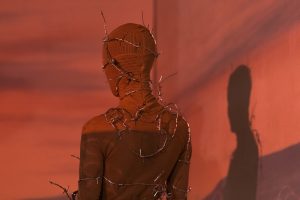 Muxxxe specializes in crafting visually comprehensible narratives that expand conversations on gender and border issues. Nevertheless, they anticipate that they’ll arrive at a point when their practice is no longer focused on Tijuana and the border.

When that time comes, Muxxxe will be moving on to a different city, possibly in Los Angeles or somewhere in Spain. With a different concept in mind, Muxxxe will continue rapping, performing, designing and evolving as an artist. But for now, their work is very grounded in Mexico—“DEL TERCER MUNDO PARA EL MUNDO.”