When Natalia Lafourcade returned to her home in Xalapa, Mexico, after a long period of traveling and performing, she found a withering garden with only a few blooming flowers. Lafourcade had neglected her garden during her time away. But soon after her return, the pandemic hit, and, like the rest of the world, she had to sit at home and face all that she had lost sight of. It meant reprogramming her routine, after having been used to being on the road around large crowds and bursts of energy. And it meant reconnecting with her home, her garden, and a part of herself she had not nourished in a long time, her inner garden.

After seven years, the Mexican singer-songwriter is releasing “De Todas Las Flores,” her first all-original album since her Grammy-winning 2015 LP, “Hasta la Raíz.” It is Lafourcade’s most personal collection of new material, an album she describes as her musical diary. “The album is called ‘De Todas Las Flores’ because I felt like I was the garden without many flowers left. I needed to connect to my universe [her own voice and ideas] again.” Lafourcade tells Latina during her visit to New York City, where she premiered “De Todas las Flores,” live at Carnegie Hall, joined by guests Omara Portuondo, David Byrne, and Jorge Drexler. 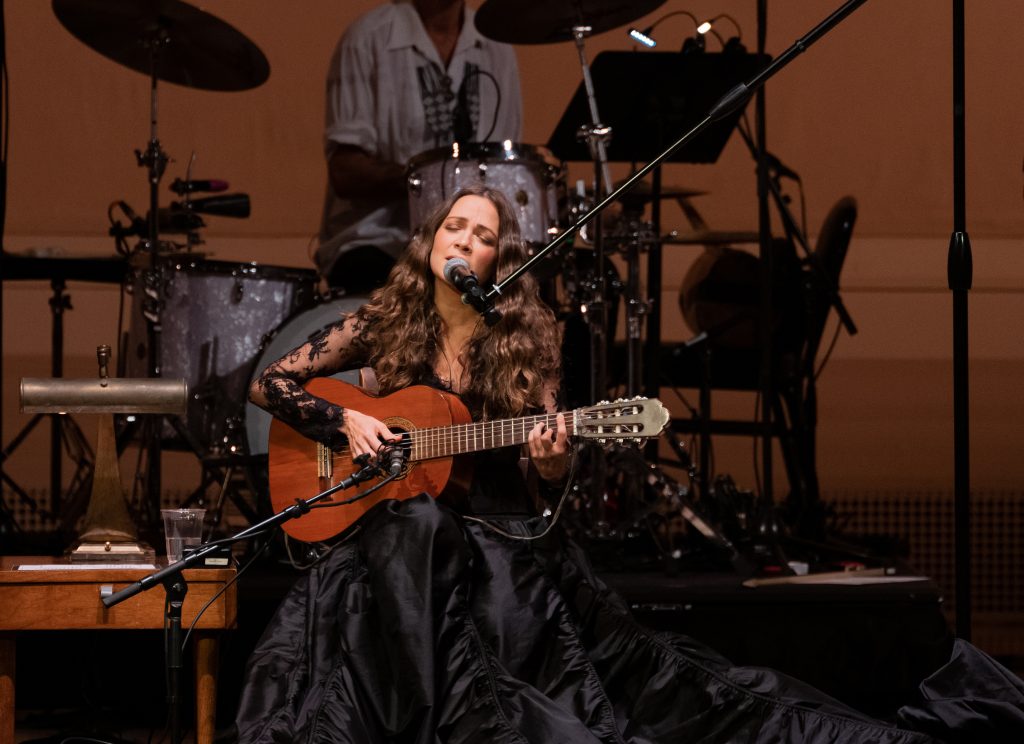 The singer-songwriter launched her career in the early 2000s, and became one of Mexico’s most beloved post-rock singer-songwriters — collaborating with contemporary pop singers like Ximena Sariñana and Julieta Venegas. But it was her folkloric interpretations on albums like “Musas I” that established her as one of the most successful singers in Latin America.

As the daughter of Gaston Lafourcade, a harpsichordist who served as a music professor, and Maria del Carmen Silva Contreras, a pianist and music educator, Lafourcade was exposed to classical and folkloric music at a young age. When she began recording the homages to Agustin Lara, Pedro Infante, among others she felt connected to all the great composers and singers she had grown up listening to, but she was no longer writing or composing her own music (her last original album was “Hasta La Raiz”). “It was beautiful for me, and I was learning a lot. So I really got into that [recording homages], not noticing that I was leaving aside an important part of my story,” she tells Latina, “which is me as a songwriter, me as an artist, or creator of my universe, my sound, my ideas.”

Lafourcade explains that around 2017, she began thinking about working on her own material again, but the timing was not right yet. She wanted to continue performing and traveling for a couple more years. But in the back of her mind, she knew she would soon begin planning for her return home, back to her family, back to her studio.

During the initial phases of “De Todas Las Flores” she wondered if she had it in her to produce an all-original album again. Lafourcade searched through voice memos for songs, clips, and lyrics she had worked on during her last several years of touring, and came across a song she had written in 2018, after a romantic breakup, a sadness tucked away in her memories. Although the song was written during a time of heartbreak and she was no longer in that place, Lafourcade could hear her voice again in the track. Unlike the interpretations she had been working on for the past few years, this song was raw and original. It would become the first single and name of the album “De Todas Las Flores,” a dedication to those we loved and lost. It references the inner flowers that have withered and the ones still blooming.

In the summer of 2020, Lafourcade reached out to her good friend, filmmaker, actor, and musician, Adan Jodorowsky — son of the Chilean-French avant-garde filmmaker Alejandro Jodorowsky. Lafourcade explains that she chose him to produce this personal album because she wanted to work with someone that felt like family, someone that shared her taste in music and aesthetic.

In a podcast produced by Lafourcade, titled after the new album, she shares the intimate processes of creating “De Todas las Flores.” The podcast’s first episode features Jodorowsky, and includes Lafourcade’s early conversations with him about producing the album, and his impressions of the initial versions. From the beginning, Jodorowsky encouraged Lafourcade to avoid digital recording and a click track, instead suggesting she record the tracks live on analog tape in a Texas border town near El Paso. Jodorowsky also brought in accomplished musicians to collaborate on tracks, like guitarist Marc Ribot, bassist Sebastian Steinberg (Soul Coughing, Fiona Apple), and the French percussionist Cyril Atef.

After seven years, Lafourcade has finally released an intimate musical diary that explores the cycle of loss, grievance, acceptance and growth. “It wasn’t until [the pandemic] that I had silence and emptiness at home, that I was able to perceive that there was [pain] inside that did not allow me to be at peace. I realized I had to go back to the studio. It was then that I was reminded how much I love making music.” Through this musical journey, Lafourcade has revisited her moments of heartache and agony, and allowed herself to let go of the dead flowers and replant new ones.

Fans captured clips of her performance at Carnegie Hall on October 27, 2022, including a final standing ovation beside Byrne, Drexler, Portuondo, and more.