El Carrito” tells the story of a Mexican American street vendor, Nelly, living in Queens, New York. At the center of this story is her street cart, the titular carrito, which forces her to confront the ways she navigates her life for survival. Nelly has a hard choice to make: either take a leap of faith or be confined by her circumstances forever.

The film premiered at AFI Fest in 2021, and has since screened at South by Southwest, won the Special Jury Prize at Seattle International Film Festival, and won an Audience Award at the famed Palm Springs Film Festival. I first met Zahida Pirani, the film’s writer and director, at the Hamptons Film Festival in New York, where my short documentary screened in the same program. I was so captivated by Pirani’s film and impacted by her storytelling that I wanted to discuss her work at length, filmmaker to filmmaker. During our conversation we talked about her creative process, her identity, and how she’s interrogating the fabric of the American Dream in her work.

GABRIELLA: As a first generation Indian-American, how does your identity influence your creative work?

PIRANI: I grew up in a Mexican-American neighborhood in San Diego county California, in a working class, immigrant family. I wasn’t just raised by my mom and my aunts, but also by the abuelita who would babysit us, we grew up with her grandkids. I would see these women doing a million things and I would be amazed. They were the breadwinners, they were caretakers, they were working, and they were also involved in the neighborhood. All of that, to me, is part of the immigrant experience. So, because of my background, the characters that I want to put on the screen are working class immigrants. With “El Carrito,” I really wanted to show something that isn’t often shown in immigrant stories which is community and connection. Our communities are really good at that because we have no choice in order to survive in this country. 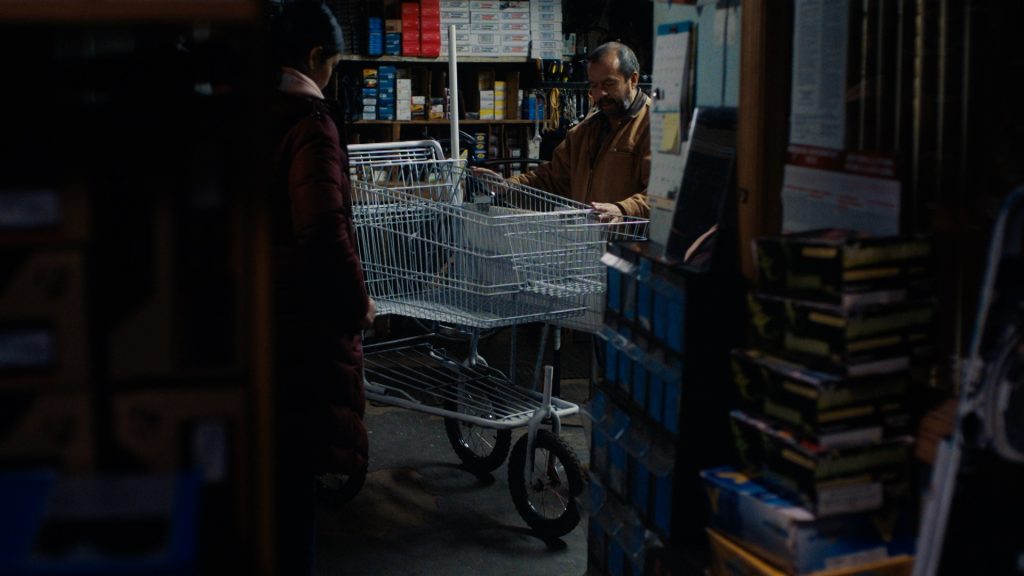 “This is the first time we see the cart, which represents the means to a better life for the main character, Nelly.” – Pirani

G: You do a lot of community organizing, how do you integrate those principles into how you organize your film crew on set?

P: For me, filmmaking is supposed to be about collaboration, and I think community organizing takes collaboration to the next level. It’s really important to put people into leadership positions who wouldn’t otherwise have that experience. My production designer didn’t have any film experience, but I knew she was artistically inclined. She also works with the Street Vendor Project, and just through her experiences there we were able to create this world that was very real. My 2nd assistant director was actually raised in Corona, Queens, and she wanted experience, so I told my 1st AD that we needed to bring her on. So she got trained on this film, and now she has this credit on a film that has gone to South By Southwest Film Festival, and that’s helped her get other jobs. Also, some of my crew wasn’t from the neighborhood so these community members were able to be a bridge.

G: Speaking of bringing people in linguistically and culturally, you grew up in this immigrant working class community. Did you learn Spanish that way?

P: Yeah, I learned by growing up around it all the time. I actually speak it better than I speak my parents’ language. Mexican culture is also really similar to Indian culture in a lot of ways, and my parents really embraced it and encouraged us to integrate into the Mexican American community. My parents never got on me for not learning their language; they wanted me to learn Spanish. I studied Spanish in school, and the community organizing work I began doing was immigrant rights work.I was mainly working with Latinx people, which is where my Spanish was really fortified. Now, living in Jackson Heights, I could go an entire day just speaking Spanish. 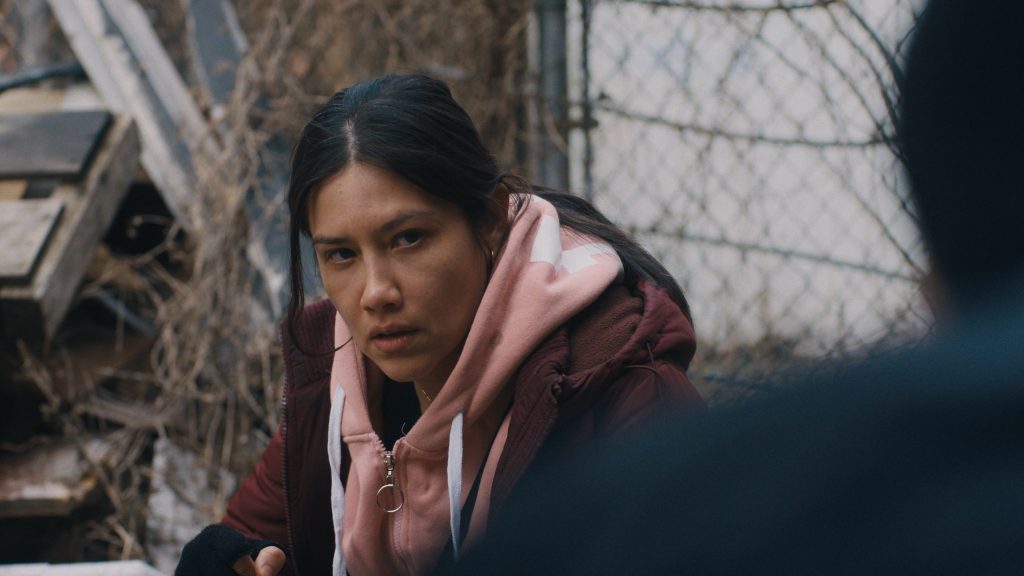 “Here, Nelly sees her ‘rival’ street vendor differently for the first time and shows some regret. There is no dialogue in this scene, so all the emotion and story comes through in the performances.” – Pirani

G: Interesting that that was your way of assimilating as a non-white kid. When I was growing up, I completely rejected the Spanish language because all the kids around me were white, so that was my way of survival. You were trying to assimilate into another immigrant culture because those were your surroundings.

P: All my life, growing up, that’s who my friends were, they were all Latinx. Even now. So I feel that there’s a connection to that culture and community that I’ve had since a very young age. I have to say that the Mexican-American really embraced me and took me as their own. It wasn’t until I moved to New York that I felt connected to South Asian communities because it’s so much more diverse here. When I was growing up there were just Indians of a certain class, but when I moved here, there were all these groups in different economic classes and many of them working class. Here in New York, there was also a big politicization of the South Asian community, with which I was able to connect.

G: Not being Latinx yourself, what kind of precautions did you take when approaching this story of someone outside your ethnic background?

P: I make sure to connect with community organizations when I start, and that my collaborators are part of that community. For example, my 2nd assistant director was Ecuadorian and my co-producer was Colombian. The biggest compliment I’ve gotten from the film is that people say it doesn’t feel like there’s an external gaze. That’s always my goal, I don’t want it to feel like an outsider is looking in. There’s not one word of English in the film, and there’s not even any non-immigrant people in the film, which was important because that’s how a lot of people live here. I want whoever’s watching the film to say “oh yea, I’m a street vendor and that happens all the time” or “I’m a cab driver and that is something we actually do.” 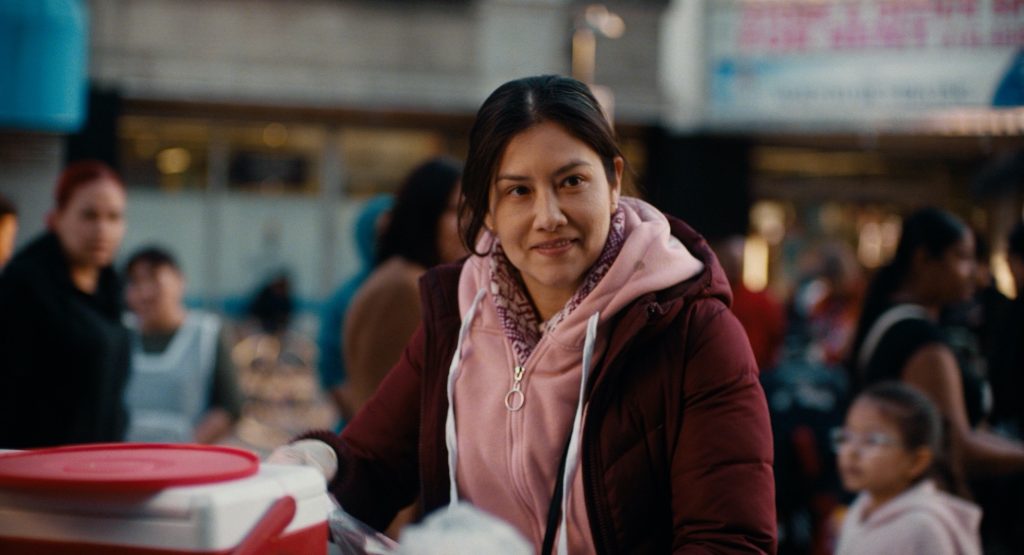 “This is one of the few times we see Nelly smiling. We see her successful for the first time, and she is at her highest point in the film here.” – Pirani

G: I can see all of the intention that you put into these details; the script, the production design… There weren’t any concessions made for a white audience or people that don’t speak Spanish. You’re in the world and it’s a real world. What I really appreciate in your film is that there was no unnecessary exposition — you didn’t feel that you had to catch anybody up.

P: That was intentional from the beginning and that’s part of my vision as a filmmaker. I don’t want to have to explain the world or the people to anyone. I feel like white people have been doing that forever, they don’t explain anything to us about their culture or who they are. We should be doing the same. “El Carrito” is a very American film and I’m very much an American filmmaker, even though you don’t hear one word of English in the film. Everything you see in the film can only take place in the US in this way. So for me, a big thing is that I want to break that — having to explain ourselves. So what, you have to sit through an American film with subtitles? Welcome to our reality. This is the new world.

G: I’m curious where you set the limits to this story as you were writing it. We’ve seen many films like this with really graphic scenes involving the police, la Migra, etc. Tell me about your decisions to not write these scenes into the film that way.

P: I knew while writing this script that I didn’t want to give any screen time to the “others”. I did not want the main character’s experience to be defined by the outsider. And I just didn’t want law enforcement and immigration to take up space in my film, they already take up so much space in the world. These elements are always going to be in the background because that’s a part of these stories. I can’t ignore that, but I also can choose who I give power to in my work. I think the stories of deportation and detention are important, but also what’s important is showing that we are full human beings and we have emotional journeys, just like anybody else. 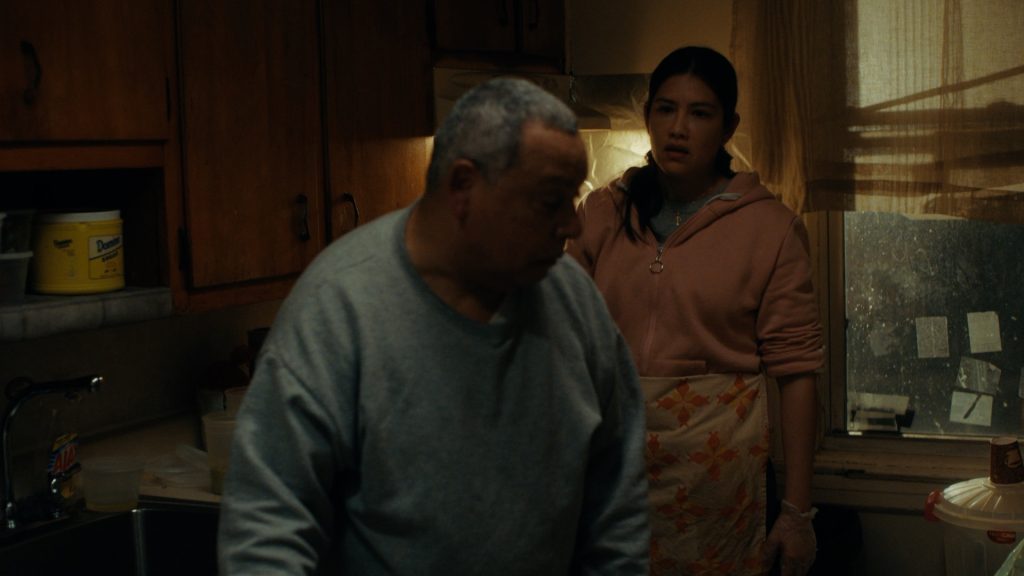 “In this last interaction with her father, Nelly reveals how the misfortunes she’s faced cause her to push the people in her life away.” -Pirani

G: How do you perceive the American dream, and how do you want to portray it in your work?

P: I don’t know that I believe in it. I think that the American dream is coming into question for everyone, even white middle class people, although working class immigrants have known the reality for a long time. And the reality to me is that if it is real, it’s not equally accessible for everyone. All of my films question the reality of the American dream, and in “El Carrito,” I was trying to put forward an alternative to the American dream, which is that community is what we get out of this experience. For those who never reach the American Dream, like my parents, does that mean our lives are not worthy? I think that’s a big issue for immigrants, the people back home expect you to make money because that’s what they think America is. So if you don’t do that, what does your life mean here? I’m fascinated with that question.