Doris Anahi is continuing to spread her wings as a musician. The Mexican-American artist cruises around Los Angeles county in her music video for “It Wasn’t You” that premieres exclusively on LATINA today.

“It Wasn’t You” is the second single from Doris Anahi’s upcoming EP. After working years in the music industry as an artist manager and proponent of Latinx music spaces in L.A., she finally took the dive into releasing her own music. In February, Anahi dropped her debut single “Que Sufras,” a Spanglish bolero that reflected her Chicana background. While “Sufras” was more of a traditional bolero, she gave the sound a modern R&B twist in “It Wasn’t You.” Anahi soulfully sings about breaking away from a bad romance and the empowerment in making such a cathartic move.

“‘It Wasn’t You’ was a cathartic experience in search of healing while thinking of a season of love in hindsight,” Anahi told LATINA. “Staying in situations although your intuition is telling you it’s time to go. I tend to pick at my own wounds, ruminating on the past and reliving memories on loop.” 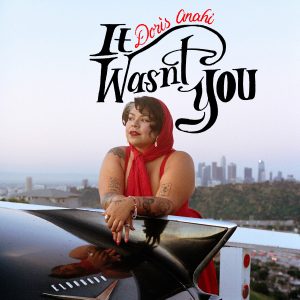 From the style of her music, her Spanglish lyrics and her stunning visuals, Anahi always proudly represents being a Chicana Angeleno in her artistry. She co-directed the “It Wasn’t You” music video with Steph OH. As Anahi sings about moving on, she cruises around L.A. county through neighborhoods like Mt. Washington, Boyle Heights, Hollywood and Malibu. The cinematic video is very much a love letter to her L.A. roots.

“The video depicts visiting all the places in L.A. that hold weight in my heart,” Anahi added. “From sunrise in Mount Washington, to sunset in Malibu, Los Angeles has brought me so much love and so much pain. Driving around my city is what helps me process these emotions, and release the heaviness.”

Doris Anahi – It Wasn’t You (Official Music Video) from Doris Anahi on Vimeo.

Up next, Anahi’s inspirational life story will hit the big screen in the Disney original documentary “Mija.” The documentary will open at this year’s Los Angeles Latino Film Festival (LALIFF) on June 1 at the TCL Chinese Theater in Hollywood. “Mija” will also be screened at Summerstage in New York City on August 3. Anahi will perform at the Kikínceañera festival, a celebration of L.A.’s queer Latinx music and drag communities, on August 26.