Walk off the small elevator onto the New Museum’s second floor and find yourself immediately enveloped by a sound reminiscent of construction: a constant pounding — thunk, thunk, thunk — reverberating off the museum’s walls and concrete floors, penetrating and pulse-raising, suggesting the impending arrival of something bigger, a crash, perhaps, or a demolition. It might take you a second, as it did for me, to figure out that the sound is not due to construction at all, but rather produced by a small installation to the right of the elevator gates, directly at your feet. 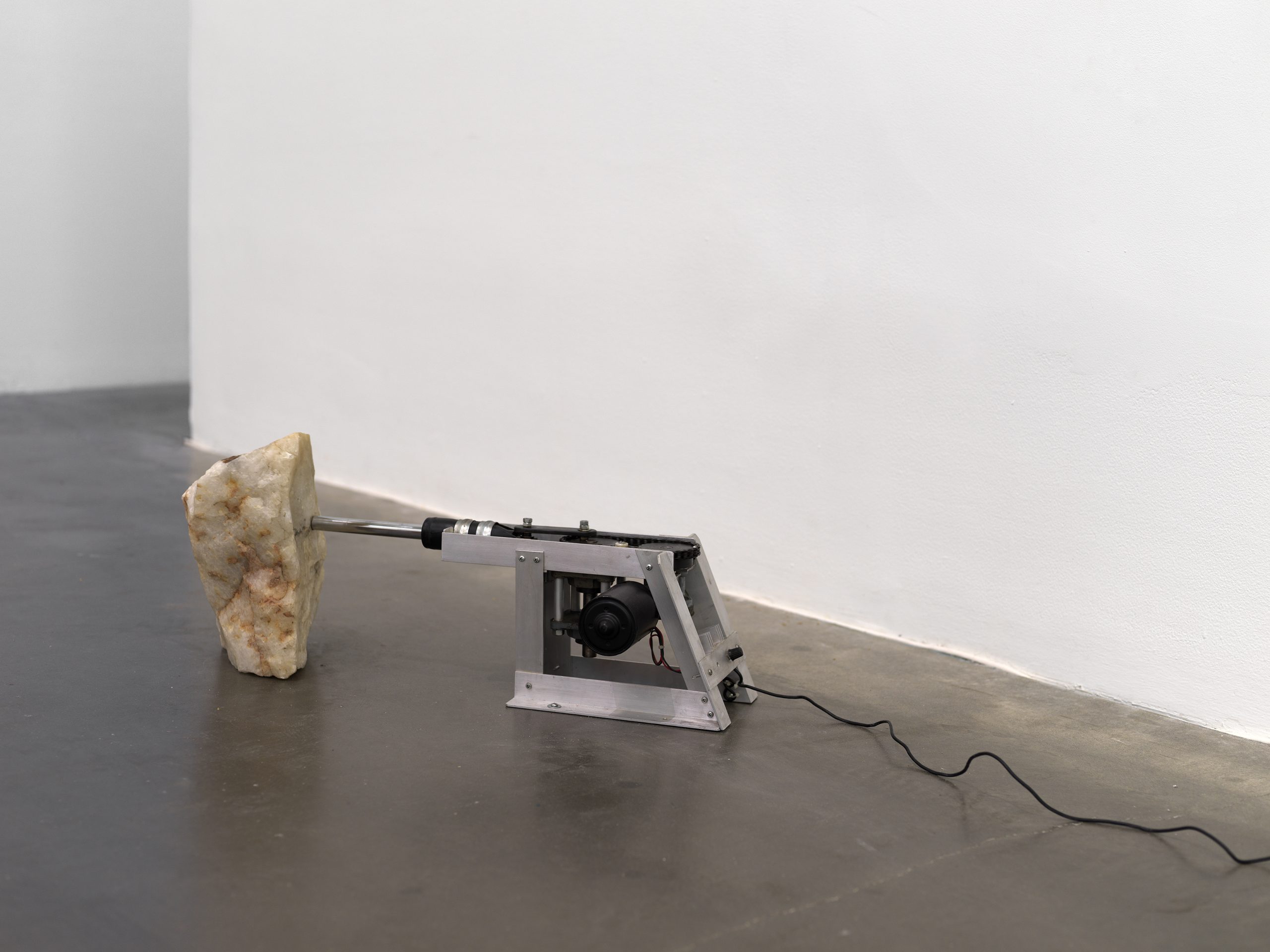 “Machine #4: stone (ground),” by Brazilian artist Gabriela Mureb, is a 2017 piece borrowed by the New Museum from a private collection in Perú. It consists of an aluminum rod, parallel to the ground, attached to a small motor that powers it to advance and retreat. Steadily, firmly, the aluminum rod hits a piece of cream-colored stone. The stone leans backward just slightly, then tips back onto its base, producing that thunk sound. Seconds stretch out between each action of “Machine #4.” The moments after the rod pushes out but before it actually makes contact with the stone; after the stone leans back but before it tips back down onto the ground; after it settles onto its base but before the thunk all have a chance to fill the space of the gallery — they expand sonically in space , asking viewers to imagine how, with enough repetitions over enough time, the rod might end up permanently changing the shape of the stone, which might in turn permanently shape the quality of the sound, the range of its movement, or the ability of the rod to reach it altogether.

This is the central metaphor of the New Museum’s fifth Triennial, which takes its title, “Soft Water Hard Stone,” from the same Brazilian proverb that inspired Mureb’s piece: “água mole em pedra dura, tanto bate até que fura.” Translated, it means: “Soft water on hard stone hits until it bores a hole.” Four floors of artworks span a range of contemporary art practices and media: video installations, collage with found objects, sculptures with both traditional and unconventional materials are all gathered under a title that seems to suggest that, together and over time, these pieces might have an effect that’s greater than the sum of their parts. 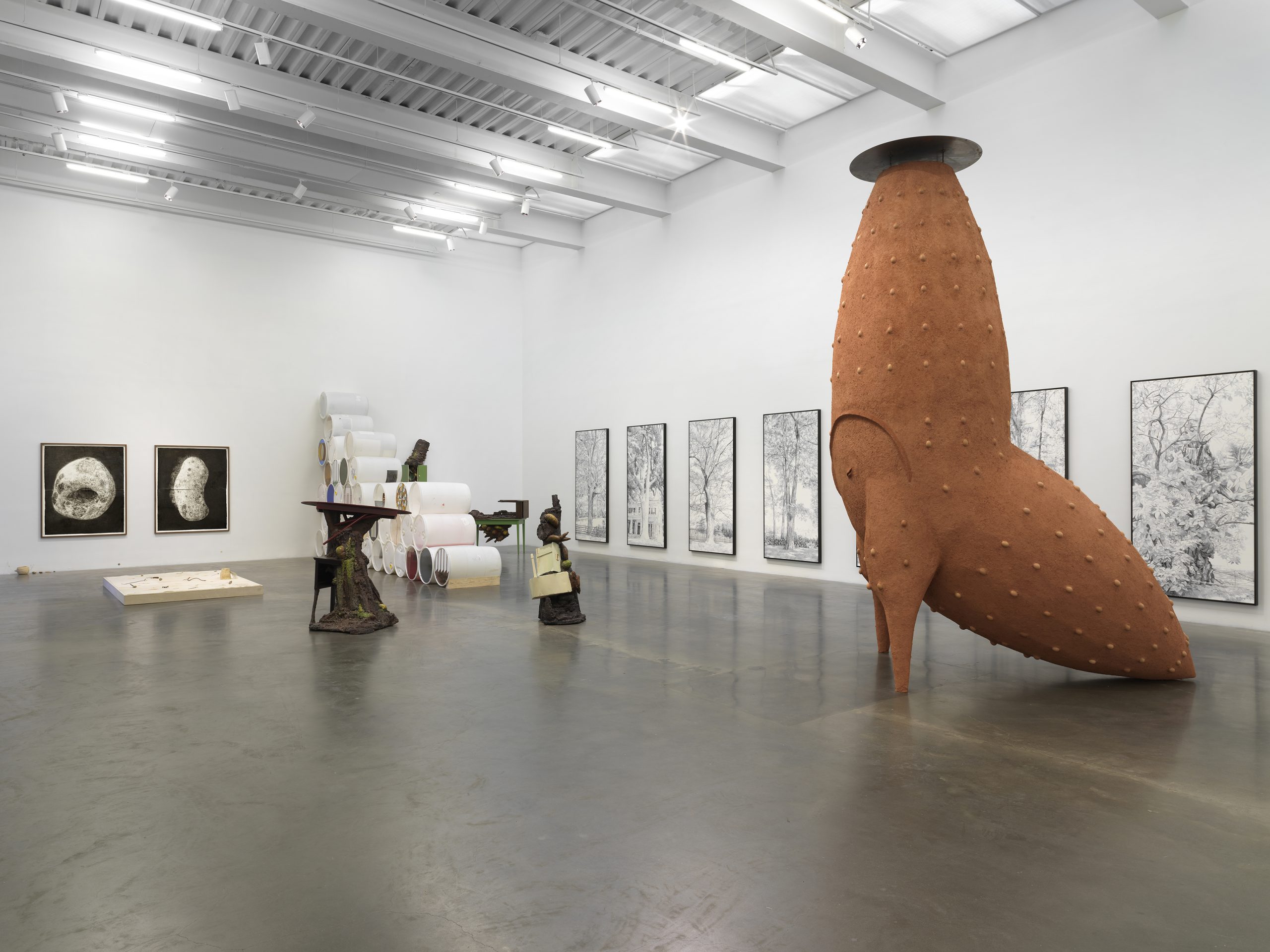 The sheer quantity and variety of the Triennial threaten to overwhelm visitors to either give over their focus entirely to one piece or otherwise find their attention diffuse and battled over. Curators placed clashing works in close proximity, heightening a dissonant effect. On the fourth floor, “As I Lay Dying,” a set of seven four-by-eight-foot paintings by Baltimore artist Cynthia Daignault, depicts centuries-old trees that bore witness to the American Civil War and its cruelties. The piece’s thick, short strokes of monochromatic black and white, suggesting a frenetic haunting, chafe against the rounded, smooth solidity of “Mamá Luchona” — a nearly fourteen-foot-tall clay sculpture that calls to mind an ancient and perhaps flightless bird, with brown eggs embedded throughout its surface in a grid pattern, by Argentinian artist Gabriel Chaile that sits just in front of “As I Lay Dying.”

Similar moments of dissonant abundance occur throughout the exhibit: the central gallery on the second floor, filled with small- and medium-sized sculptures, struggles to offer the eye a place to land. This might be the point. This year’s Triennial, in its own words, “recognizes artists re-envisioning traditional models, materials, and techniques beyond established paradigms.” As such, pieces tend to be highly personal, imbued with so much specific feeling as to be impenetrable, or highly referential, rendering themselves unintelligible if a viewer is unfamiliar with the histories toward which they gesture.

This is the challenge of curating a show during, to use the words from Triennial’s press release, “this moment of profound change, where structures once thought to be stable are disintegrating or on the edge of collapse.” Without those scaffoldings onto which to hold, artworks can feel untethered from any reality but that of the artists. 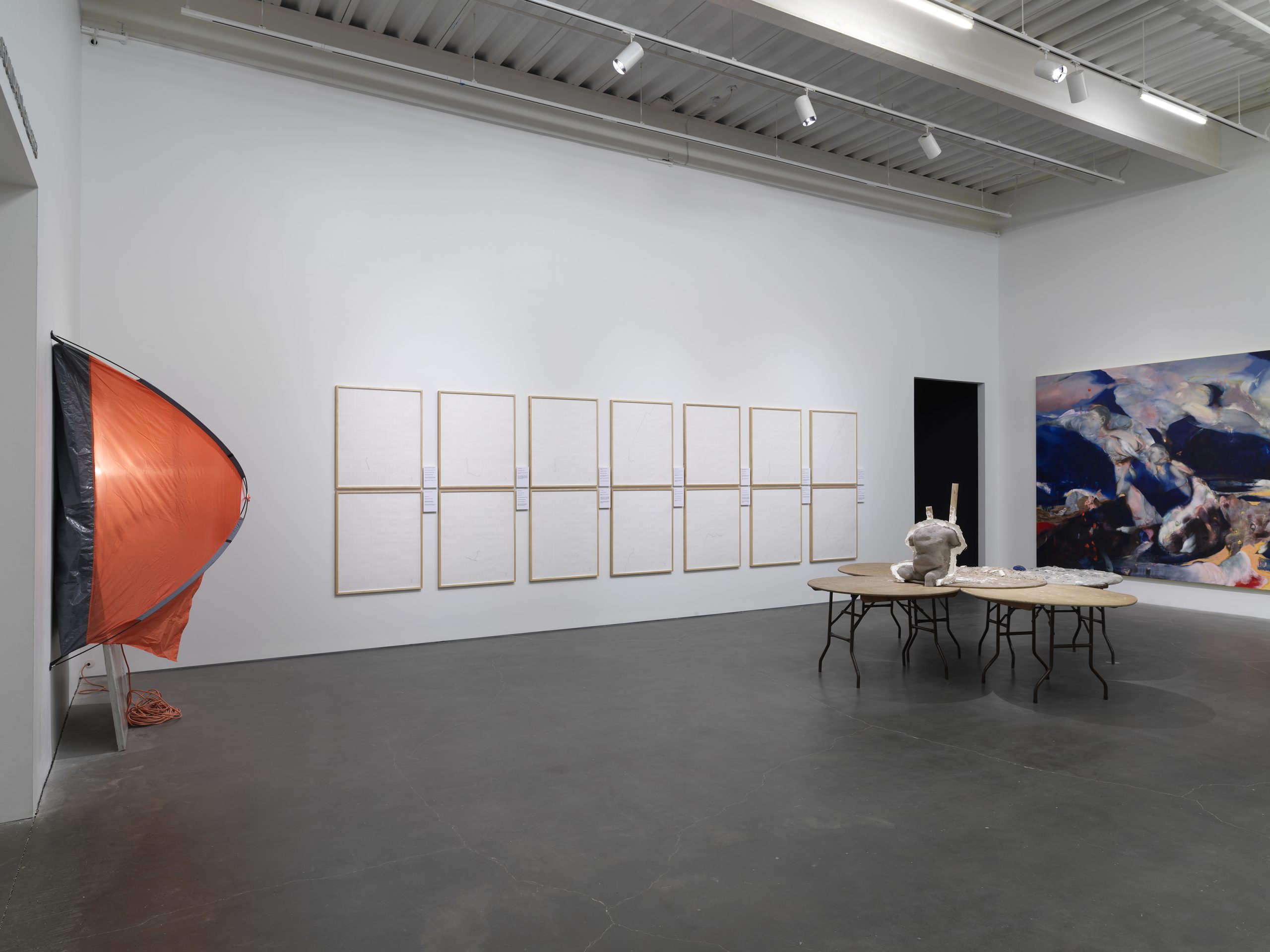 One piece cut through the noise: Clara Ianni’s “Labor Drawing (New Museum),” a set of fourteen cartographic drawings that map the commutes of as many New Museum workers. Laid out in a two-row grid that takes up almost an entire wall on the museum’s third floor, Ianni’s work invites visitors to step close to it: the light wood frames almost match the color of the paper on which the commutes are traced with graphite, which in turn almost matches the color of the wall, giving the whole piece an air of self-camouflage; some journeys are so short as to be represented by a single dot; and the accompanying sets of data — time elapsed, start and end locations, method of transportation — are printed in a small font on cards that cannot be read from far away. It would be impossible to absorb the piece without spending at least several minutes with it. “Labor Drawing (New Museum)” could be read as a direct reference to the recent unionization efforts at the New Museum, in which union workers were met with retaliation. But even without that context, the piece serves as a respite from what can feel like hand-wringing about the direction of art production by countering the anxiety with simple facts. We might not know where the art world is going, but every morning the security guard at the New Museum knows where they’ll be in forty-five minutes.