Dominican-American performance artist Shenny de Los Angeles has created a body of work that heals generational trauma and invites every hurt to free itself into joy. Based in Brooklyn, Shenny is particularly interested in centralizing Black & Brown Caribbean femmes in her work and asking her audience to contemplate the beauty in everyday lived experiences. Latina is proud to share Shenny’s original poem, “Sisters by Water,” alongside a visual story with her chosen sister, Larissa. Shenny explores the intimacy of their friendship and embracing each other for exactly who they are. Latina’s Culture Editor, Alissa Lopez Serfozo, asks Shenny about the visual aesthetics of the piece, natural elements, cultural legacies, and love between two femmes. 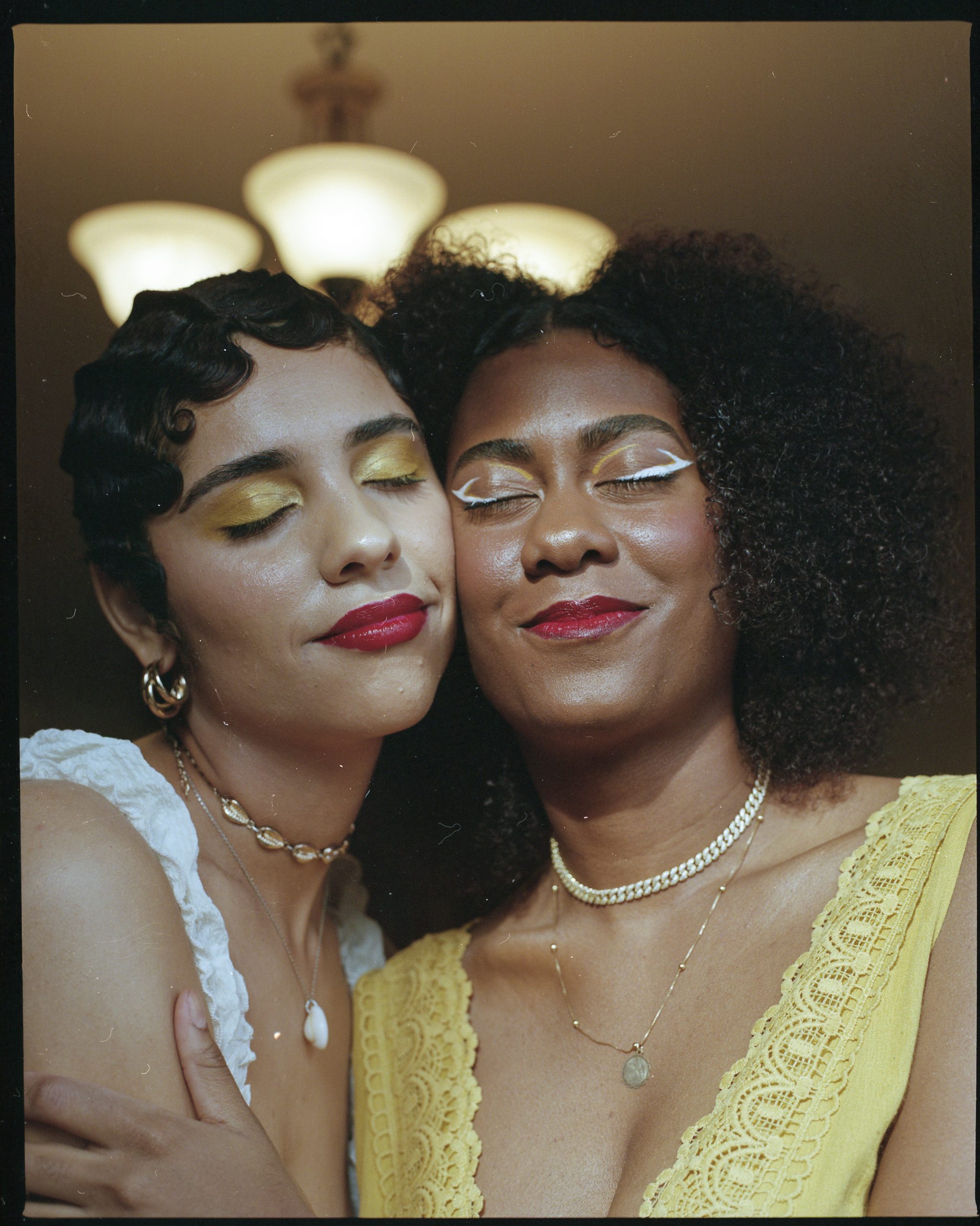 Walk me through the title of this photo story “Sisters by Water”.

People often ask me when I’m with a friend I love if we’re related, and my response is always the same. “Yes, we’re sisters by water.” You know, growing up, you would constantly hear “blood is thicker than water.” but I always struggled to connect to that as truth. And, as I grew more into my faith, I understood that some relationships are bonded through a different kind of element. Some people are strengthened by blood, but most of my family and I are connected/witnessed/related and loved by water. I believe Yemaya* brought the women I love into my life to help me remember who I am. Sisters by water is that kind of ancestral love. If you know, you know.

*Yemaya is the Yorùbá Orisha or Goddess of the Ocean, considered the mother of all.

What is the relationship between the two femmes featured?

Larissa and I are sisters. We met each other at 18 when we both first moved to New York, and we have been in each other’s lives ever since. Eight years of friendship. Although, we had a fallout in 2017 and separated for a year. We still count that though! It’s actually what brought us closer. When we came back into each other’s lives, we shared grounded intentions of the kind of relationship we wanted with each other, one that was honest and safe to be a part of. And we’ve never looked back. We communicate when the world hurts us. We communicate when we get hurt by each other (which is even harder). But that is why it’s one of the most radical relationships I’ve ever had, because we don’t love each other based on potential or who we think the other person might be. We chose each other for exactly who we are. 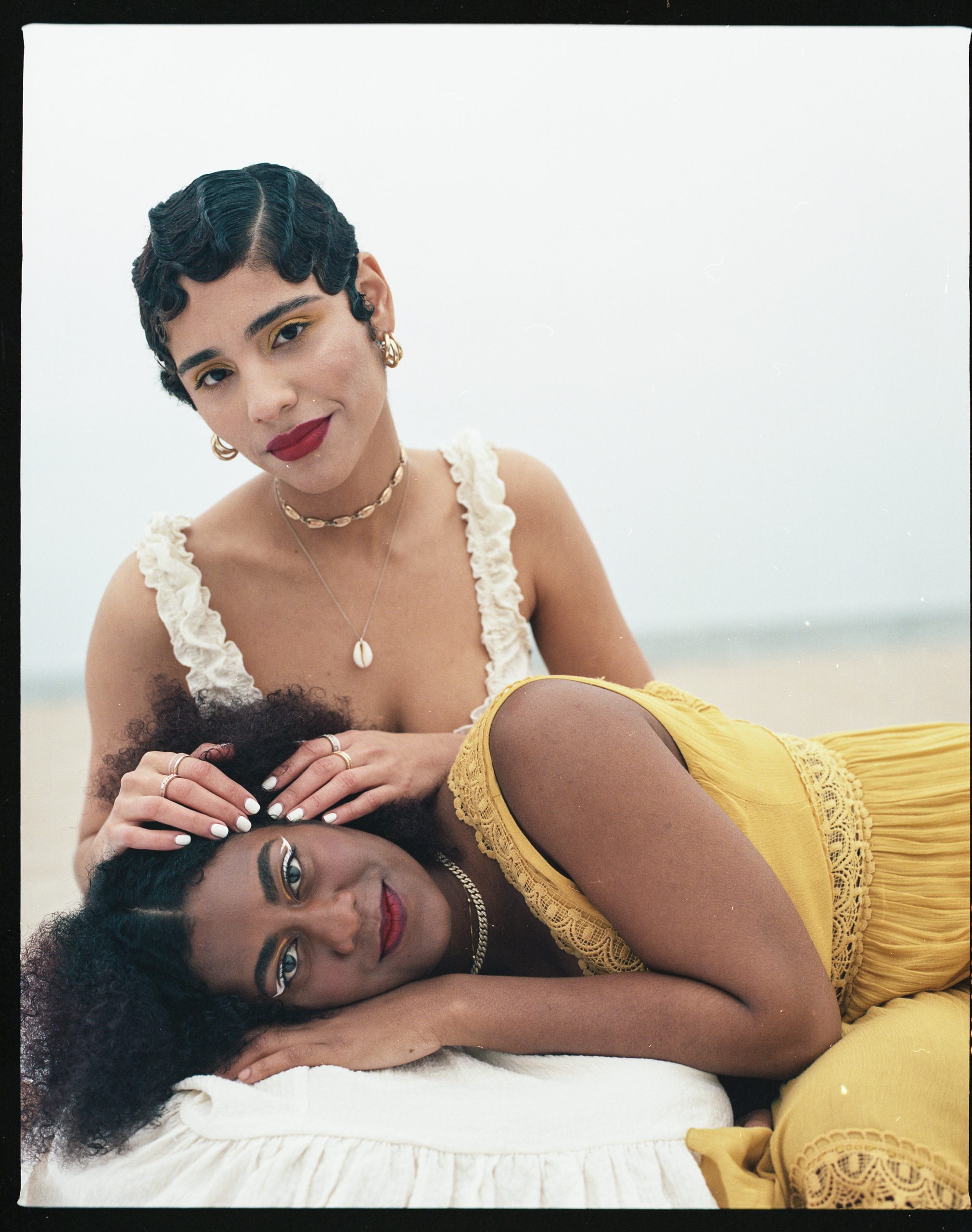 What can you tell us about the art direction behind this photo story? What do these photos say about sisterhood and chosen family?

I’ve known for the last two years that I’ve been wanting to create stories that share the intimacy of friendship. When I think about my life and my work honoring my lived experience, I can say confidently that I wouldn’t be alive today if it wasn’t for sisterhood. Specifically, in 2019, I swore the world was eating me alive. I don’t want to speak for Larissa, but what I can say is we both have witnessed each other lose our minds. We’ve cared for each other in sacred times — like lovers but, honestly, deeper than that. The intimacy of our friendship was a part of my survival. And I wanted to honor that in my writing, accompanied with these photos, and hopefully continue a series in different mediums, in which I celebrate the intimacy of friendship.

I reached out to Dalis (who shot the photos) at the end of 2020 because the vision was so loud in my head and it kept revealing itself to me. And I knew she’d execute it without question; she captures Caribbean women so effortlessly as she’s Dominican herself. And to be understood in that way was important to me. We came together, and I shared with her how I wanted the intimacy of Larissa’s and my love to be honored in the storytelling. And she encouraged integrating my ideas into a three part story;  getting ready, buying the mangoes, and then arriving at the beach. I originally had the idea of doing a Caribbean picnic once we arrived at the beach, to honor ritual work (as spiritual practice is incredibly important and integrated into my artistic work) but unfortunately, the weather was insanely cold when we got there. The flags ended up taking the picnic’s place to honor the spiritual aspect of ourselves. And though I will admit, I wish we could have done it the way I imagined, I’m coming to accept Mother Nature has her plans for a reason. The strong wind and gloomy sky ended up painting the terrifying beauty of who Larissa and I are, and the nature of the history we carry of the generations that came before us. And I’m incredibly grateful to Dalis who captured exactly that.

I wanted the story to not be about sexualizing two Brown femmes but rather, depicting a different form of touch, of love, of tenderness. I think sometimes we see two femmes embrace each other and it’s already labeled as romantically involved. Larissa and I  hold hands as lovers do. We wrap our bodies around each other. We feed each other our favorite snacks. We nurture each other’s dreams and help silence our fears. We dive into the deepest parts of our darkest and lightest thoughts. We dream storm together. Sisterhood is a part of queerness but it’s not necessarily the same intimacy lovers share. You can’t compare it. It’s just a different, but necessary, kind of love. When I arrived to the understanding that my work was truly going to be my legacy, I decided that I had to stop centering my art around lovers and men, and start sharing through my work what has healed me.  I don’t believe in being loyal to anyone or anything. And I don’t expect that in return. Everyone I love is someone I chose. That’s the beauty of these kinds of relationships. We’re together by choice. Because we’re free to choose love. Ultimately, this piece is an affirmation of that kind of freedom.

Sand and water are important for the setting of this story. Why shoot on the beach?

The beach for me is home. It’s where I have witnessed myself be brave. When I see the water, I can’t help but say “Hola mama.”  I know it’s a safe place to surrender. And I knew the piece was calling for that kind of vulnerability.

Originally, I was trying to stay away from the water because all my work in the last year has been at the ocean, but Dalis was super encouraging of it being at the beach in spite of my past work, and I had to get out of my head and realize if everything I make for the rest of my life is at the ocean, then it’s just that. I don’t have to fight it. 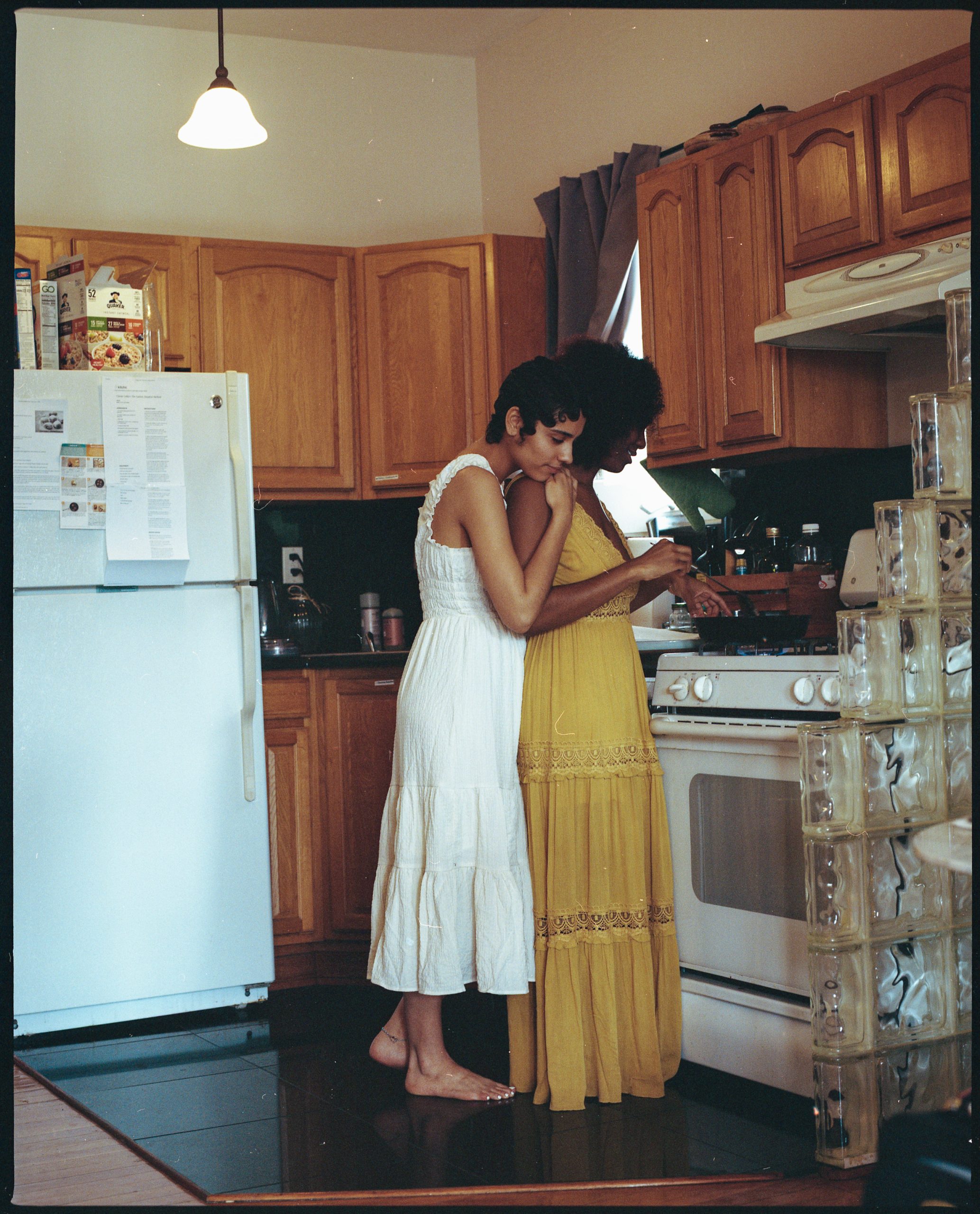 How does this piece honor the different cultural legacies of each femme?

For me, I think it’s more about the testimony of all that we have lived and survived and who we’re becoming. Our stories are not written down. History hasn’t been told correctly. There is so much misinformation, that for me this piece was to honor what I was certain of; my love for this woman, for this friendship, for where we come from. I also wanted the piece to honor the kind of world Larissa and I have dreamt of. The kind of women we want to be. We both feel urgency to honor our ancestors, to know the land that we come from, and feel safe in our own bodies.

Historically, women and femmes like us have had such a violent relationship with our own bodies.

Taking it back to my poem “Sisters by Water” I say:

there’s something quite holy about our breasts out

something sweet about our bare skin in the sun

something pure in the way we witness all of each other.

I want you to know, in this dream, we’re not afraid.

We know this tree. We enjoy the fruit. & most importantly, we’re comfortable with ourselves.

This part is so sacred to me because there is a world in which Larissa and I are free to be naked with no shame. And more than anything, I know our ancestors want that for us. Want us to walk in our power. To feel the beauty of who we are. To know we were made from magic.

Does this photo series center trauma or joy? Both or neither?

The photos center the truth. Integrating the poem, “Sisters by Water,” with the photos, there’s a line in which I say, “there are unspoken rituals in friendships, especially when you’re grieving.” Larissa and I have witnessed each other experience loss and watching someone you love go through an experience that literally takes them out of their body and forces them to question their existence is heartbreaking.  And I wanted the photos to capture the intimacy of grief just as much as I wanted the photos to capture the intimacy of love. So it’s both. Because there’s so much joy in two people choosing each other. The Love between two people is not always necessarily “pretty” but when it’s honest, it is breathtakingly beautiful and worth every minute of the experience.

What role do the two flags play in the story? Visually? Symbolically?

I don’t want to give an exact answer as much as I want folks to experience the story for themselves. Especially, folks within our community, I want y’all to receive it for what it is to you.

That being said, I can say in a way, I feel the flags represent who we are as an extension of us. The bold colors we exuberate. The red of our blood. The blue in the pain we carry. The green in the grace we give. The sharpness of our tongue. The complicated beauty of our spirit. As the flags relinquish to the wind,  it personifies the act of releasing ourselves when we’re ready to let go. More than anything, my love for Larissa has invited me to surrender myself to what lives inside of me.

Until Larissa found me in such a desperate state, had no other option, but to cast a spell on me,

“no, it’s not the end, she said, it’s the universe begging you to choose yourself Shenny”

and right there, as my name left her lips, I felt the blood in my body forced to change direction,

surrendering to the magic of each word as it began healing me. – sisters by water 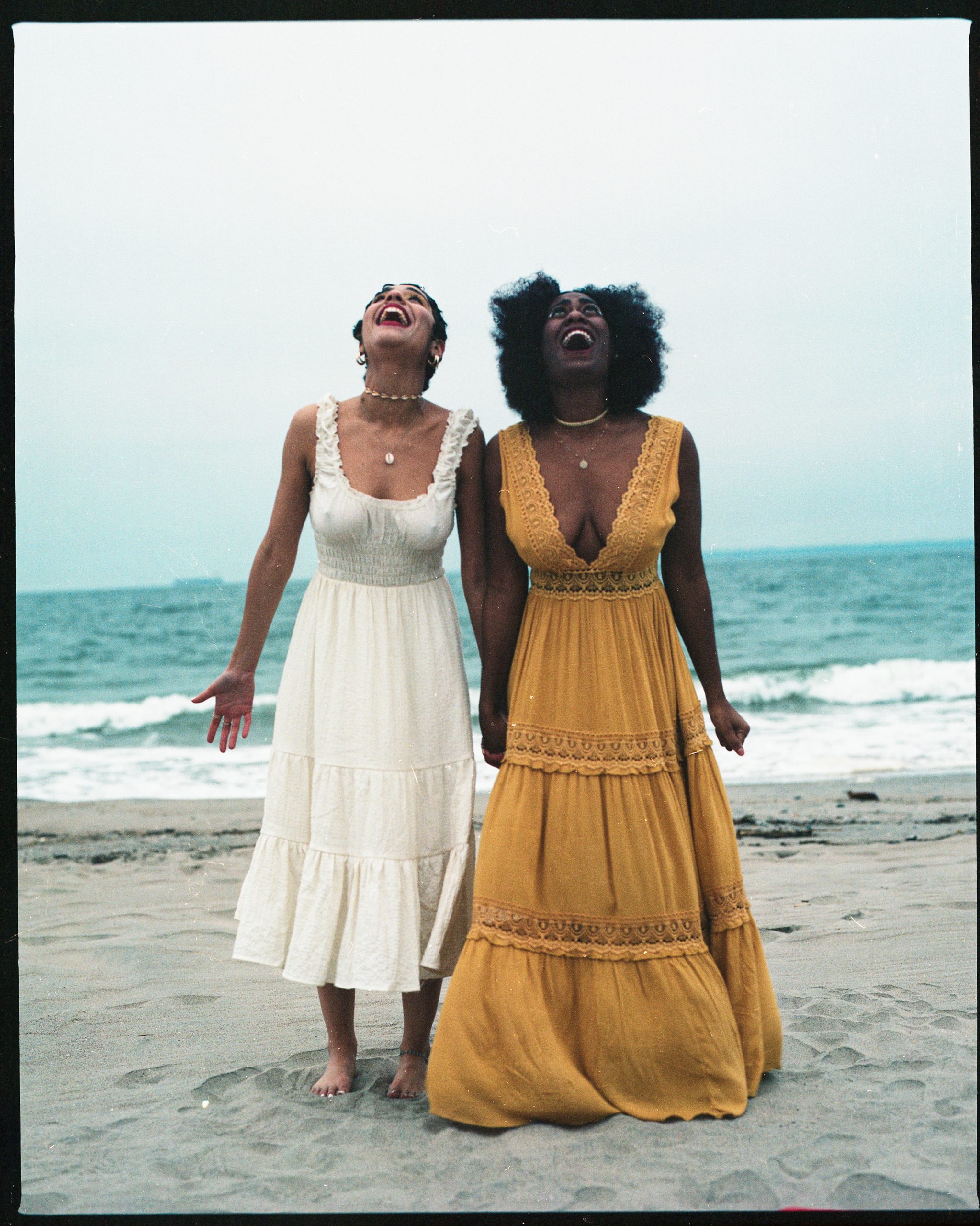