Tacombi Serves Tacos With a Cause

A bright red 1963 Volkswagen bus, or “combi,” is parked between several tables within a Nolita taqueria. Instead of seats, however, this combi stores a quasi-kitchen/bar. Its roof has been cut off and lifted to reveal a chalkboard with different messages such as “Bienvenidos” or “Try Mezcal Unión.”

This combi, affectionately known as “The Tacombi,” is the heart of the Tacombi restaurant chain, currently comprised of fourteen locations along the East Coast, with plans to open seven more by 2024. Today, the brand encompasses more than just taquerias: it sells consumer packaged goods such as tortillas and totopos at Whole Foods and runs a community kitchen that distributes 5,000 meals a week to families in need. 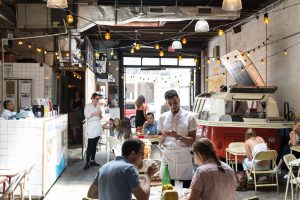 Before it became an iconic destination in downtown Manhattan in 2010 and an East Coast sensation in the years that followed, Tacombi was only the Tacombi, traveling along the Yucatán Peninsula with founder and CEO Dario Wolos.

Though Wolos was born to a Mexican mother and French father in the small town of Corning, New York, he spent most of his childhood in Monterrey, Mexico. Growing up in Mexico, with time spent in the U.S. and Canada, he dreamt of sharing his culture with the rest of the world.

Wolos decided to start a taqueria in 2005. He knew he needed to start small and perfect his concept before taking it abroad, so he embarked on an adventure. He traveled along the Yucatán Peninsula to absorb Mexican culture and hospitality. Only after meeting countless families and eating at multiple roadside taquerias did Wolos park the Tacombi next to a nightclub in Playa Del Carmen, take it apart to turn it into a restaurant, and start selling tacos. In 2006, the first Tacombi taqueria was born. 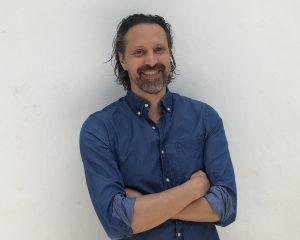 “It’s probably cliché now when people say ‘mi casa es tu casa,’ but in Mexico, it truly has meaning,” Wolos said, speaking to LATINA from the Nolita taqueria. After taking in Mexican flavor and hospitality on the road and in Playa del Carmen, he decided to create a permanent home for Tacombi, both the van and the brand, on the streets of New York. In 2010, Wolos opened the first taqueria in Nolita.

Twelve years later, Tacombi has 14 restaurants, including locations in Florida, Virginia, Maryland, and New York. In the next two years, Tacombi expects to open three restaurants in Miami, one on Long Island, another in Connecticut, and more. Since its inception, the company has also been invited to sell its tortilla products in grocery stores like Whole Foods.

Laura Merritt, Tacombi’s Chief Operating Officer, explained that a Whole Foods buyer liked Tacombi’s products so much that in 2016 he asked an employee if he could sell them at the supermarket company. Because Tacombi makes all their products in-house, they agreed and would transport tortillas and totopos from their taquerias via the subway to Whole Foods.

Despite Tacombi’s humble roots, the brand’s “Vista Hermosa” line of tortillas, totopos, and frozen burritos is now the top-selling tortilla brand at Whole Foods and is distributed along the East Coast and in Texas. In February, Eater even deemed Vista Hermosa totopos the best chips for nachos.

The Tacombi team works to keep the integrity of Mexican culture in all of its endeavors. “When made authentically, Mexican food is perfect,” said Meritt. She emphasized that at Tacombi, they don’t take shortcuts. Tortillas are prepared through the traditional Mayan and Aztec practice of Nixtamalization–where one treats corn with lime, cooked, dried, and ground in order to unlock flavor, aroma, vitamins, and minerals. 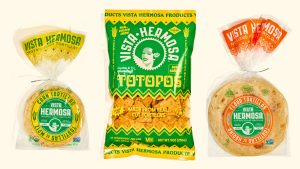 Still, Wolos reminds us that Mexican food is nothing without the people behind it. “Mexico’s biggest resource is not its oil, it’s not its anything, it’s its people,” he said. He started the business not only to share Mexico with the world but also to give back to the community that has given him, and taco-lovers everywhere, so much.

Wolos believes that Tacombi is borrowing from Mexico “the recipes belong to these people: tal señorita, tal abuelita” and that the country and community deserve something in return. This belief has been as central to the brand as the combi parked in Nolita. Its mission to help the Mexican and Latin American communities is what truly drives Tacombi forward.

Keeping this purpose in mind, Wolos constantly sought ways to invest in education for the Latino community. If schools or education-related charities asked to use the taqueria for events, Wolos always agreed. In 2019, he founded the Tacombi Foundation with the hopes of helping local Latino communities and pre-investing in Mexico through education. 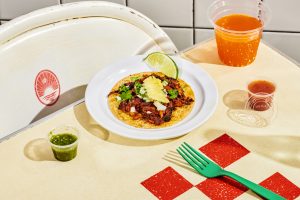 When the pandemic hit, Wolos and his team realized that the Foundation had a mission grander than education: feeding those in need. Even though they had to close their restaurants during the lockdown, they could still put their kitchens to use. As the pandemic kept many Latin American immigrants from working and earning enough money to feed their families, Tacombi established a community kitchen that is now a permanent branch of the brand.

Susana Camarena, Senior Director of Impact and Culture at Tacombi, runs the Tacombi Foundation and Community Kitchen. Speaking to LATINA on Zoom, she highlighted the taqueria’s altruistic efforts: “Tacombi exists not only to serve our guests and customers but also our team members and our community.”

The Tacombi Foundation has donated over 400,000 meals to families in need since 2020. Every time they open a new restaurant, Tacombi finds local community partners that could benefit from the foundation’s work. They also hire locally and provide jobs to many Latin American immigrants. While they still hope to invest in Mexicano through education, the staple program of the Tacombi Foundation is currently the community kitchen.

Furthermore, Tacombi uses their foundation to instill its values onto the Tacombi staff, occasionally inviting their general managers to see the foundation’s impact firsthand. Managers sometimes help hand out meals or prepare guacamoles with local children.

“I wouldn’t be here if I knew that Tacombi is just business-oriented and not community-oriented,” says Camarena.

The Cinco de Mayo fundraiser truly captures what Tacombi is about: not only sharing Mexican culture with the world but also coming together and helping the Mexican community. This community, however, is not exclusive to Mexican citizens. After all, “everybody that loves Mexico [in] the end is a part of the Mexican community,” says Camarena.