The Creative Orbit of Nancy Gamboa and Her Daughter Paloma

On a predictably bright and balmy day in aseasonal Los Angeles, Nancy Gamboa and her daughter Paloma Maisonet sat down with me for a conversation that was all but predictable. The pair flowed effortlessly from discussing a wide array of artistic expression to elaborating on their expansive (if somewhat divergent) notions of Latinx identity. As we meandered through topics both intellectual and emotional, I was struck by the nuanced interconnectedness of this mother-daughter duo and their uniquely reciprocal exchange of ideas, passions, and creativity. 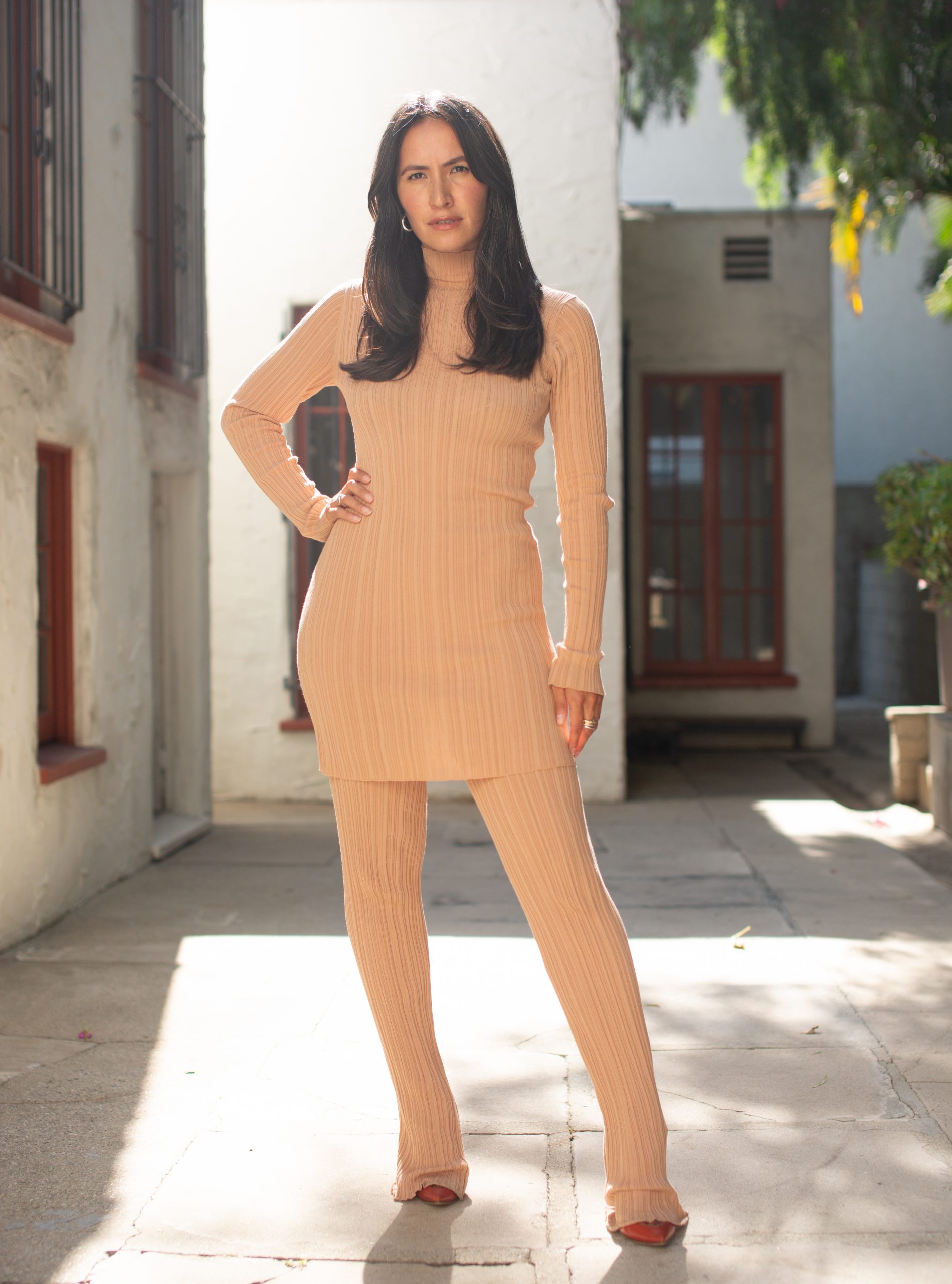 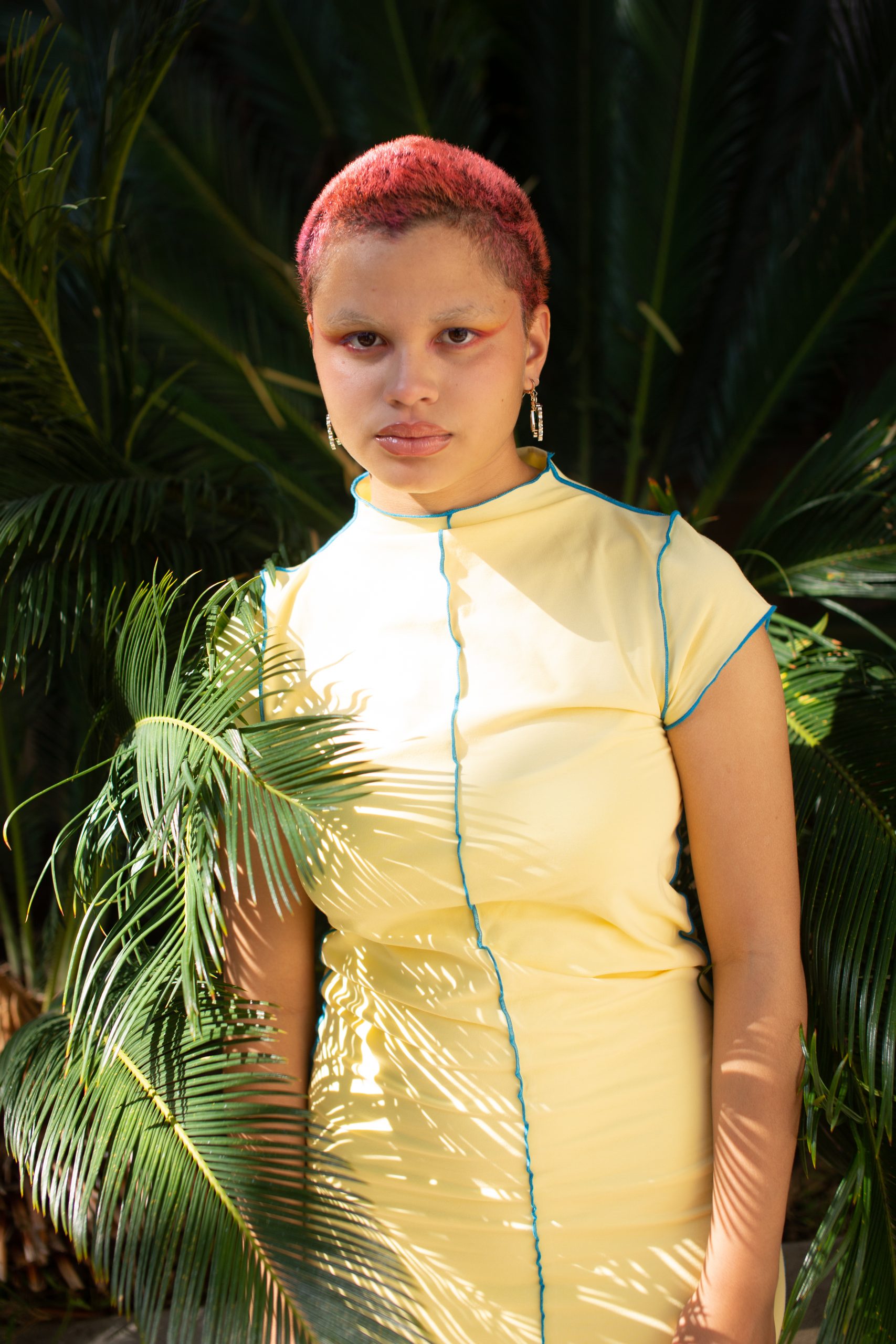 Maisonet has grown up steeped in the art world, acting as her mother’s wide-eyed companion through countless shows and gallery visits since she was a child. Both have modeled for effortlessly cool brands Eckhaus Latta and 69 US, and Maisonet has designed collections for Everybody.World since she was 13. At home, Maisonet has enlisted her mother’s help in dyeing and re-dyeing her hair to fit the moment’s (typically neon) mood.  Artistic expression seems to have crept into every crevice of their lives.

A shared passion for disseminating art has inspired the Gamboa-Maisonet duo to build their own creative platforms. Mamá is developing a digital community-based initiative called Botánica Fine Art, named after the botánica Gamboa’s Puerto Rican grandmother operated in New York City for 45 years. Her daughter has recently launched Westside Baby, a print zine whose first issue asks,  “Bitch, who are you?”

When we broach the term Latinx, I learn more about how the mother and daughter perceive their identities. For Gamboa, the term consolidates large groups of people with different political histories and geographies into one group and she cautions that “generalizations can lead to suffocation.” Meanwhile, Maisonet prefers the term Latine (la-tee-neh) and believes identity terms are useful for educating people on a larger scale. 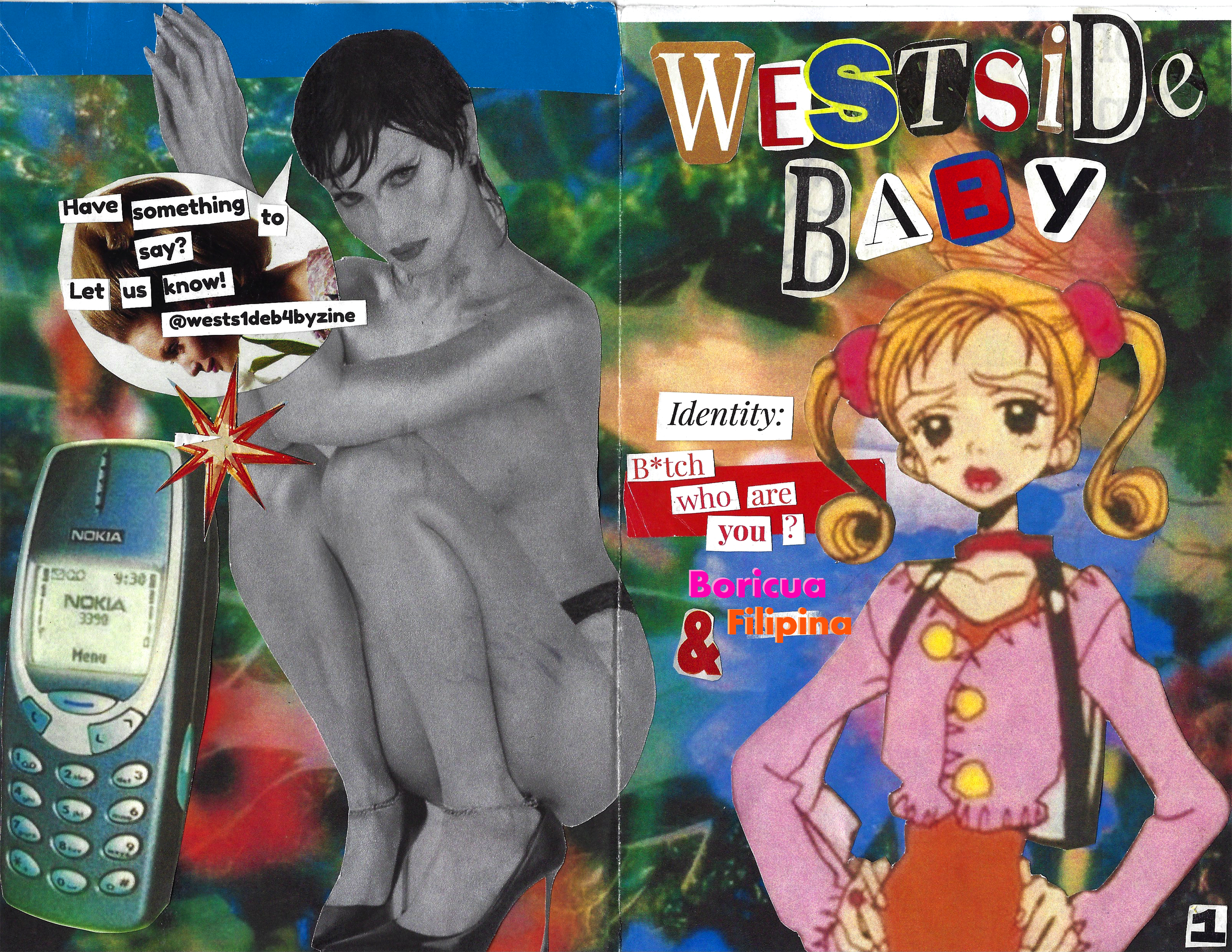 When I  ask about the role Botánica will play in exhibiting brown identity, she is hopeful her platform will demonstrate the variety of Latine experiences.

“People should learn about how different we look and our experiences are not one monolith,” Gamboa says.

Much like the modus operandi behind her daughter’s new zine publication, Gamboa would like to foster an artistic platform that promotes Latinx/Latine visibility.

Perhaps their LA background contributes to a shared perspective.

“In LA there’s a super prevalent concept of bad neighborhoods, which means different parts of our city are isolated racially and socioeconomically,” Maisonet says.

This yields large differences between the Eastside and the Westside, the South Bay and the Valley. Amid geographic division, access to major institutions often determines which locals can join the art scene and contribute to the making of LA culture. Maisonet’s Westside Baby seeks  to reclaim this siloed narrative by educating young Los Angelinos about art shows they can visit and promoting programs and opportunities for Black and brown creatives, such as MOCA Teen, an academic-year-long program bringing high school juniors and seniors behind the scenes at MOCA, or Ghetto Film School, a free multi-year visual storytelling course for young LA artists. 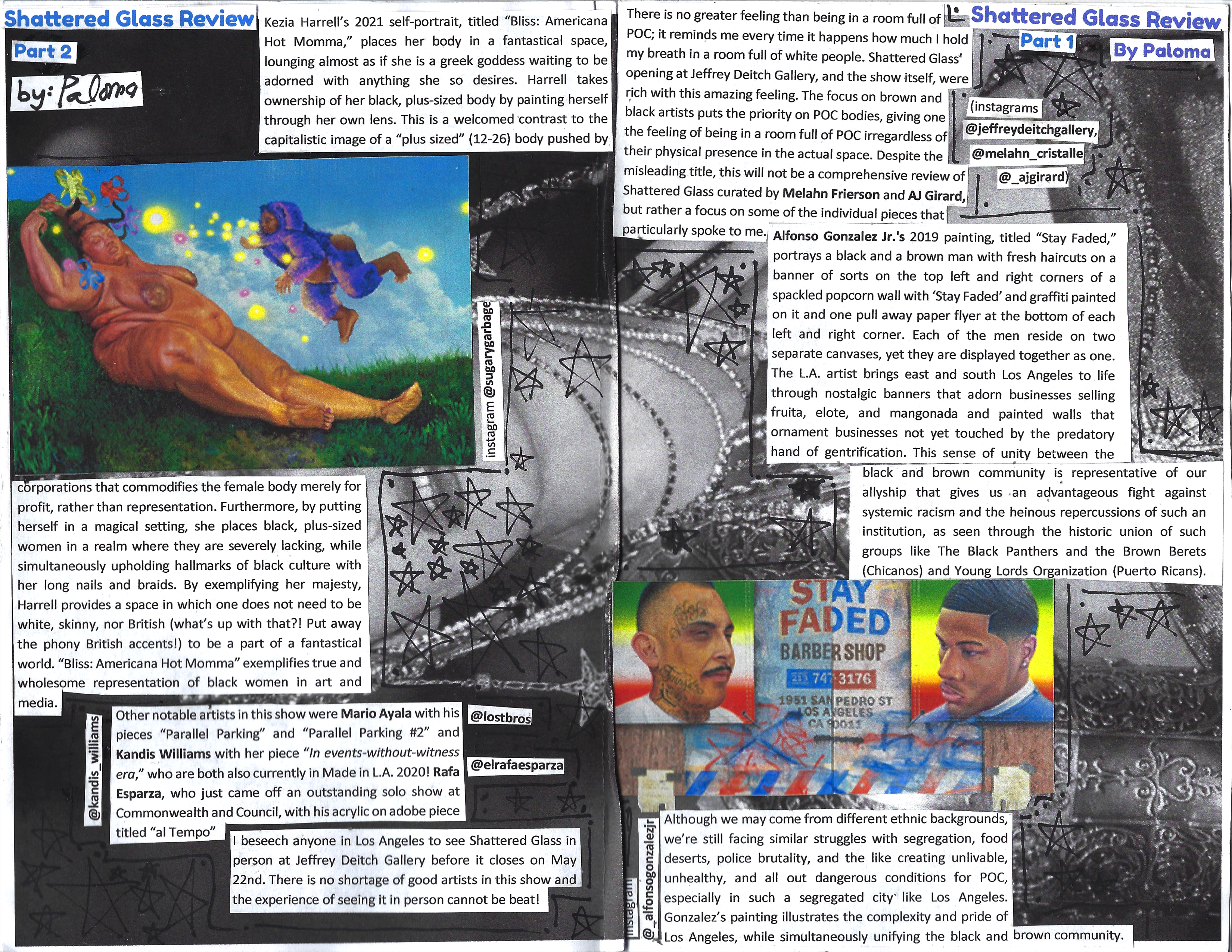 It’s powerful to recognize generational differences between this mother and daughter. Gamboa recalls growing up in an era in which she overcompensated for being brown, straightening her hair daily and using fashion to code-switch  Now, she feels liberated in her own skin.

Broaching the way euro-centric features were the baseline for aesthetic acceptability in her youth, Gamboa says,  “When I was young, I got used to working twice as hard all the time. This bled into a hyper-disciplined work ethic and a perfectionist concern with my appearance. ”

Maisonet and I talk about our shared experiences of shame we felt attending predominantly white and moneyed single-sex Catholic schools. Keenly aware of unhealthy beauty standards’ persistence, Maisonet talks frankly about LA’s cult of beauty: “Beauty here is often synonymous with being white, skinny, and tall.” She says it’s hard to feel desirable when desirability is so often defined as something she is not.

On the question of Latina femininity, Gamboa grew up with specific ideas of what she was supposed to look like.

“My parenting style is the exact opposite,” she shares. “ In fact, I learn a lot from Paloma,” who has taught her  to unlearn deeply internalized rules.

Mamá talks about past stigmas around anything considered “ghetto” and how revisiting these memories still stings. Sharing a story from her teenage years, Gamboa reveals she once worked at McDonald’s and was fired for having long acrylic nails.

“Back then they were seen as ghetto,” she says. Maisonet nods in agreement when Gamboa explains, “As a brown person I grew up acutely aware of how aesthetics change how you are perceived.” 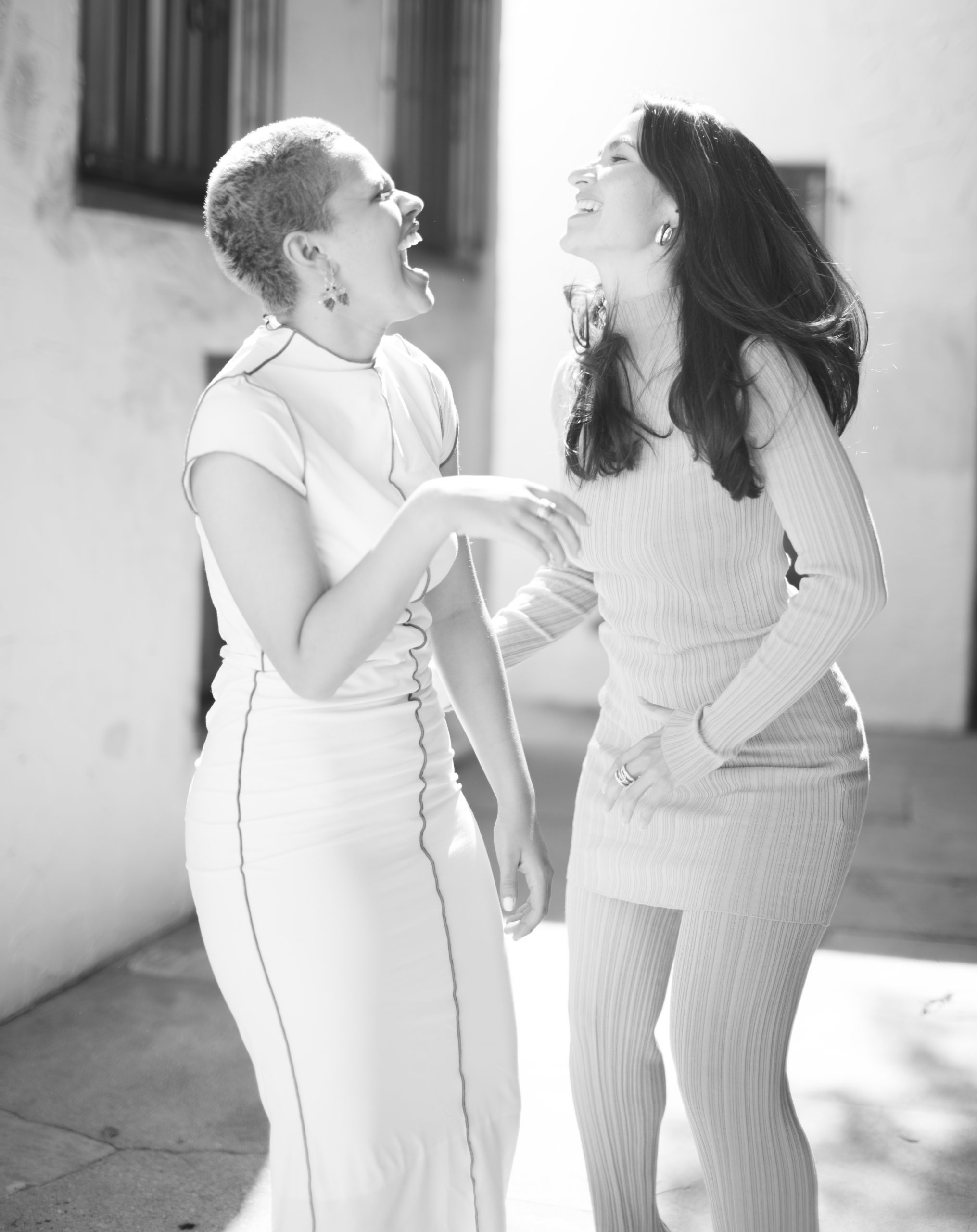 In  today’s digital age, the duo is aware that creativity comes with some level of marketing and self-promotion.

“Our livelihoods are bound up in these economies,” Gamboa reveals, “It’s the nature of aesthetic businesses surrounding objects in the digital age.” Working in a highly subjective field binds them to competitive markets, but Gamboa adds that “aesthetics also bring sensitivity, one benefit of living in a highly visual culture.”

Our discussion of contemporary visual culture transitions into one of self-expression, namely personal style. Noting  their opposing yet complementary fashion tastes, they reveal that they often DM each other images that inspire them. Maisonet talks about their shared love of objects, for finding things at thrift stores and juxtaposing high and low fashion.

As for their differences, mamá describes herself as a uniform person who prefers the simplicity of a white top and denim, and cites inspiration from ‘90s models  Yasmeen Ghauri and Patricia Velasquez. On the other hand, Maisonet’s fashion style is all ‘80s punk: heavy eye makeup, shaved heads, and what she likes to call “stripper and raver vibes.”

Even with unique generational differences, their closeness pays respect to one another’s lived experiences. The nuanced interconnectedness of this mother-daughter duo encapsulates how we can perceive artistic expression alongside what it means to be Latino/Latinx/Latine today. Mamá y hija share a bold honesty to assert creative autonomy, each promoting radical self-acceptance, confidence, and authenticity.  Gamboa and Maisonet are building  on their knowledge of the past to embolden their  hopes for an inclusive, creative, and Latine future. 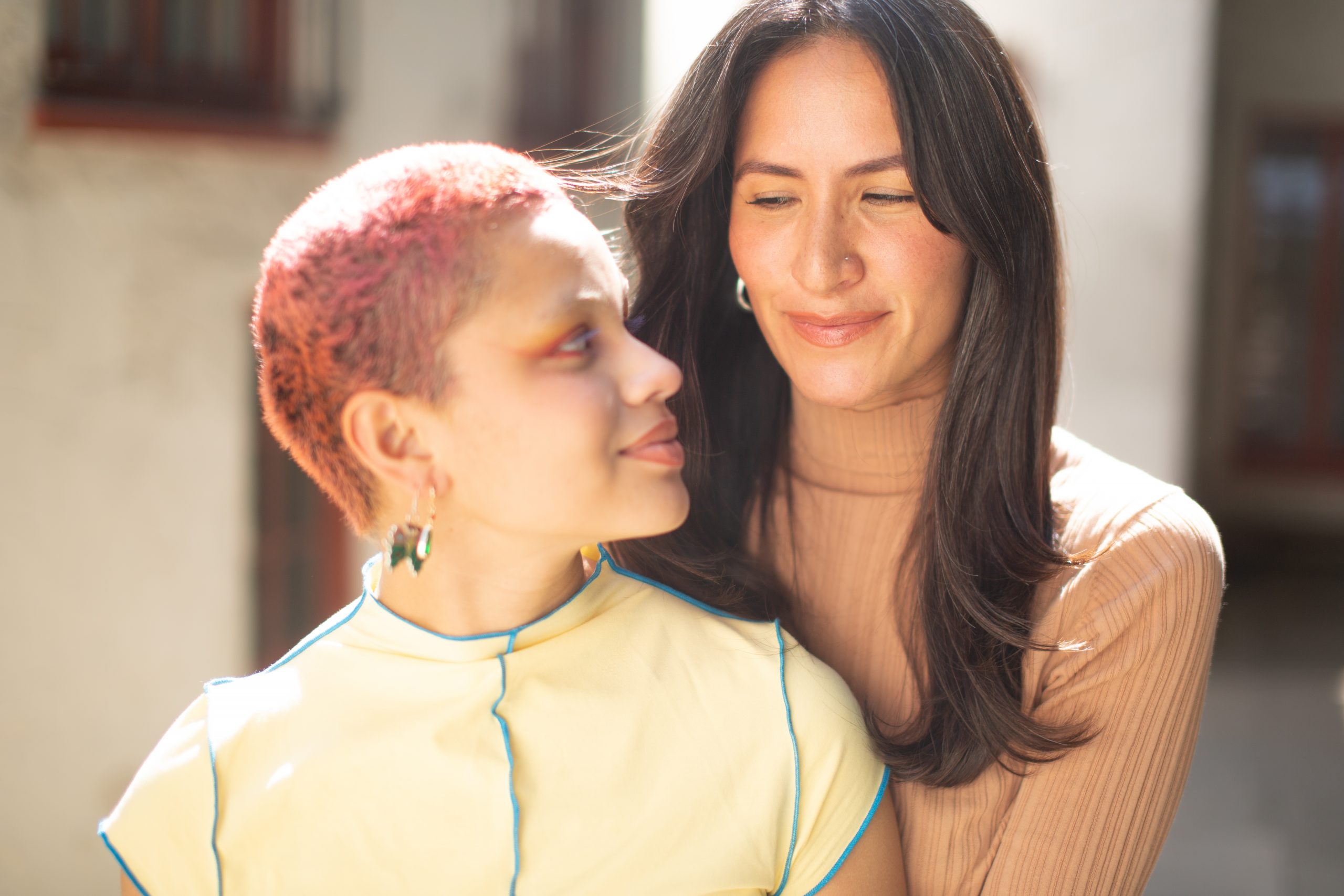