The Legendary House of Xtravaganza

In 1982, Hector Valle, a Puerto Rican voguer in the New York ballroom scene, decided to start his own house exclusively for up-and-coming Latinx ballroom performers. Latinx queer and trans folk had long been part of New York’s drag scene and its ballroom culture, an underground subculture with a history stretching back to the turn of the twentieth-century. Crystal LaBeija, the Black trans woman credited with establishing the ‘house’ system in ball culture in 1972, adopted her drag name in part because the “Latin queens” of the Manhattan drag community frequently called her “La Belleza.”

One of the earliest members that Valle recruited to his new house would become its mother, Angie Xtravaganza. Xtravaganza was born in 1964 into a large Puerto Rican family — one of 13 children that her devoutly Catholic mother raised in the South Bronx. A childhood of intense abuse pushed Xtravaganza out into the streets at a very young age, an experience the house mother rarely discussed in her later life. From the age of 13, Xtravaganza had already supported a family of her own, composed of queer and trans youth kicked out by their birth families, who gathered in Times Square and at the Christopher Street piers in Greenwich Village. To them, she was known simply as “Ma.” In Michael Cunningham’s 1995 article “The Slap of Love,” one of her children recalled Xtravaganza as an incisive judge of character who eschewed flashy wit for authenticity and candor:

When she was 14, Xtravaganza started to do drag and perform in balls in Harlem, learning the art from the legendary performer and designer Dorian Corey, mother of the House of Corey. By 16, Xtravaganza had begun to transition and compete in New York’s ballroom scene. When she went out, her signature accessories included “drop earrings and seven-inch stiletto heels” and she walked a category known as “model’s effect,” in which contestants were rewarded for most convincingly embodying the runway performance of a fashion model.

Danny Xtravaganza recalled one particularly memorable night that the house mother, the youngest of all the legendary mothers of Harlem, snatched a trophy with her impeccable fashion sense and larger-then-life sense of glamour.

“She wore an eggshell-colored linen suit, a mini-skirt and a blazer, with brown trimming and brown buttons. She had a brown organza blouse underneath the jacket, and a white duster and a brown shawl. Angie went to the middle of the runway and started spinning. And the shawl she was carrying got bigger and bigger and bigger. The first time she walked, it just looked like a regular little shawl, but it turned out to be, like, fifty feet long. She started swinging it, and all the other queens got tangled up in it.””

In 1983, the House of Extravaganza made its debut on the ballroom scene and its members quickly began to accumulate trophies for fashion and vogue performance. Less than two years later, though, Valle passed from an AIDS-related illness. He was 25 years old.

Hector Crespo Xtravaganza, an Afro-Puerto Rican founding member of Xtravaganza, would go on to co-lead the house with Angie Xtravaganza in the years following Valle’s death. Born in 1965 in Puerto Rico, Crespo was raised by his single mother in Jersey City and frequently skipped school to take the PATH train into Manhattan to visit the Christopher Street piers, where the city’s Black and Latinx trans and queer youth gathered.

“I started hanging out around Christopher Street when I was nine,” Crespo explained to Cunningham in “Slap of Love.” “My first experience with a guy, I was seven. When my mother found out I was gay, she started treating me like shit. She was, like, ‘You want to be a woman, start cleaning up.’ I was treated like a slave. So I ran away. I ate out of garbage cans, slept in abandoned buildings.”

Before Hector Xtravaganza was a house father, Angie was his mother. He recalled in the same interview how Angie, five years his junior, had leapt to his defense to fight a truck driver who, mistaking Hector for a hustler, had threatened and insulted the younger man when he rejected the trucker’s groping and solicitation.

By 1989, the House of Extravaganza had dropped the E from their name and became known as House of Xtravaganza. The change, which referenced the Roman numeral for 10, a perfect score in ballroom, came in response to both the House’s and ballroom culture’s growing fame. Several members of Xtravaganza were featured in the December 1988 issue of Vogue, May 1989 issue of Time, and September 1989 issue of Vanity Fair. At the 1989 Love Ball, a star-studded celebrity charity fundraiser organized by the Design Industry Foundation for AIDS and modeled after a traditional ballroom competition, the House of Extravaganza took trophies in several categories including “Banjy Team,” “Wedding of the Year,” and the voguing grand prize. Extravaganza House member David Ian Xtravaganza hosted the night as master of ceremonies.

The following year, members Jose Gutierez and Luis Xtravaganza would also choreograph and star in the music video for Madonna’s chart-topping single “Vogue” before going on to work as choreographers and backup dancers for Madonna’s iconic and controversial Blonde Ambition tour. 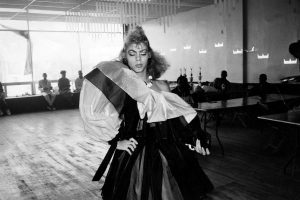 In 1990, the House of Xtravaganza was featured prominently in the documentary Paris is Burning, which introduced ballroom culture to mainstream film audiences. The film captures the moment that Angie Xtravaganza was awarded “Mother of the Year” at the titular Paris is Burning ball, organized by Paris Dupree, founding mother of the House of Dupree. The film also features Venus Xtravaganza, an aspiring model from Jersey City who Angie described as her “closest daughter” in a particularly emotional story arc. On Christmas Day, 1998, Venus Xtravaganza was found dead at the Duchess Hotel in New York, evidence suggesting that she had been strangled four days prior. Although her killer was never found, filmmakers included a conversation with Venus in the documentary during which she recounted an earlier experience of escaping from a man who attempted to hurt her upon realizing that she was a trans woman.

In 1991, Angie Xtravaganza was diagnosed with AIDS. She passed two years later, on March 21, 1993, at age 28. Like most trans women in the ballroom scene, Xtravaganza had relied on low quality hormones throughout her life, which left her with chronic liver disease that exacerbated the progression of the disease. A few weeks after her death, the New York Times published an article structured around Angie Xtravaganza’s memorial service entitled “Paris Has Burned.” The article mourned the many deaths of New York’s ballroom scene, including Angie’s daughter Venus and Kim Pendavis. The article also addressed the controversy surrounding accusations that Paris is Burning exploited the talented members of the ballroom community, who saw little renumeration for their participation in the documentary despite its significant commercial and critical success.