Drag Brunch at La Pulperia with Drag Queens Hibiscus and Misty Mountains Davenport captivates all five senses. The queens’ dance moves–not to mention their flexibility– are mesmerizing. Their makeup is impeccable. The songs they lip-synch to are so catchy that everyone at the restaurant dances along, and their banter causes all four corners of the room to erupt in laughter. The smell of empanadas somehow makes the environment even more inviting. But what makes this symphony of sight, sound, and smell an ideal way to spend a Saturday morning is that the cold, bottomless mimosas are ever-flowing.

After their second show of the day, both Drag Queens spoke to Latina from the back room of La Pulperia. Counting what looked like hundreds of one-dollar bills, they discussed their passion for drag, life beyond work, and the injustices currently plaguing the Drag industry.

Misty, 32, is known off-stage as Marshall Johnson. She has been doing drag in New York since June 26th, 2016, and loves it. When Misty performs, she feels inside a fantasy, “I see myself lifting out of the floor. I see 300 dancers behind me. And literally I’m on a soap-box at Rock Park performing for three people,” she says. She has worked everywhere from Stonewall to La Pulperia–where she has been hosting drag brunch for three years. 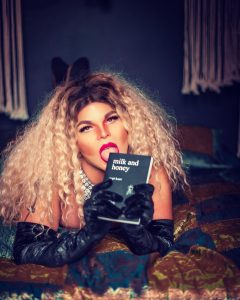 Hibiscus, 33, has been living in Washington Heights and performing Drag in New York for ten years. Offstage, her name is Eli Ramiro, and she is originally from Hawaii. She chose the state flower as her stage name to exhibit pride in her roots. “I never thought drag was a career until I moved to New York,” she said. Now, she treasures waking up and doing what she loves. In her performance at La Pulperia, she used her small size to her advantage not only in the jokes she told but also by choosing to wear very high heels.

Each drag queen brings something different to the table, according to Misty and Hibiscus. For Hibiscus, who calls herself “NYC’s pocket-sized firecracker drag queen dancing her heart out,” her talent is dance. She can drop down to a full split in a second, do a hand-stand on a brunch guest’s chair while they’re still sitting in it, and move her arms and legs at an unbelievable speed while still keeping the beat of the music.

Meanwhile, Misty has what Hibiscus called “more of a Marylin Monroe type thing.” She entrances her audience even before the show begins by greeting every table individually. She memorizes the name of at least one person at every table so she can have a go-to point anywhere in the room. That way, she can say “Yaas Brian” to someone who’s being very enthusiastic or “Mark, get your table together” to someone who may have had one too many mimosas. Beyond providing an intimate performance, Misty hosts with humor and dances with devotion.

While drag is a big part of these Queens’ lives, it’s not everything. Misty occasionally attends Mets games, and Hibiscus likes to run or go to the movies by herself. “It’s a lot of my life, but it’s not my complete life,” said Misty.

Both Misty and Hibiscus attended college. Misty grew up in Nevada and studied theater at the University of Nevada, Reno. Hibiscus has a degree in biomedical engineering with a minor in fibers and textiles from the University of Arizona.

“I think one thing that people forget is that we’re real people too,” said Hibiscus. She explained that most of the time they are playing a character and that even though she portrays a very sexy persona, Hibiscus can be “kind of a prude,” she said while laughing.

The Queens also discussed the inequalities lying beneath the elaborate makeup and costumes. Hibiscus, who is Asian, felt that she was often chosen as a “token” diversity queen and that she has worked twice as hard as white queens to get more important gigs. Misty, who is biracial but presents mostly white, agreed. She said that it is a lot more difficult for BIPOC queens to headline shows and that only after the pandemic have they begun to see any improvements. 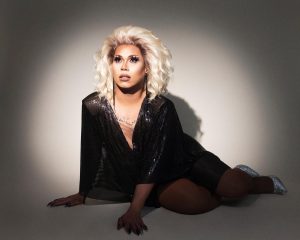 A silver lining to lockdown forcing Queens to perform online was that many BIPOC queens gained more visibility. Furthermore, movements such as Black Lives Matter and #StopAsianHate–which gained more traction in 2020 and 2021– shed light on the importance of diversity in the drag world.

As host of La Pulperia’s Drag Brunch, Misty tries to bring Queens of many different backgrounds to the show. Because the venue is a Latin-American restaurant, she often invites Latina Queens. However, in the name of true inclusivity, she does not exclusively welcome Latinx queens.

Even though Misty acknowledges that presenting white has come with many privileges, she still struggles “as a bigger person.” Because larger drag queens are not always featured, she has had to “fight that fight.”

Misty and Hibiscus still believe that drag has a long way to go. Nevertheless, they are optimistic. “Drag is ever-changing,” Misty said. And she’s right. Beyond the drag world becoming more inclusive post-pandemic, many places in Brooklyn are even hosting drag kings and showcasing alternative forms of drag.

More importantly, the most successful drag queens are not those looking for fame and money. According to Hibiscus, the Queens with longer careers care about the community, the art, and the history of drag. This, they believe, bodes very well for the future.