A Reintroduction to Goyo: the Afro-Colombian Artist On Her Debut Solo Album “En Letra de Otro”

Gloria Martínez, the Afro-Colombian singer and rapper known as Goyo, strode into the downtown Miami theater for the premiere of her HBO Latino documentary surrounded by a posse of women. To her side was her young daughter and mini-me, Saba. Behind her were two longtime friends, now her stylist and make-up artist. Noticeably absent, however, were the two male members of Goyo’s Latin Grammy Award-winning hip hop trio, ChocQuibTown. As we sit down in the empty screening room for an interview, cameras begin snapping from Goyo’s team, but she remains unfazed, her doe eyes lined by gold rhinestones. Now, it’s Goyo’s time to shine.

Goyo has been passionately developing her music career since 2004, with ChocQuibTown, composed of Goyo, her husband Carlos “Tostao” Valencia, and her brother Miguel “Slow” Martínez. ChocQuibTown was born with the mission to represent their town and Colombia’s Black culture. Since then, the trio has produced six studio albums, won two Latin Grammy Awards, and been nominated twice for Grammy Awards, in 2011 and 2015, respectively. The goal for its members was always to be solo artists, but the whirlwind of acclaim and exposure sidetracked them. Now, Goyo is making a name for herself as a solo artist with her debut album “En Letra de Otro,” and the companion HBO documentary chronicling her inspirations behind the genre-defying work.

“It’s been a beautiful experience,” Goyo said. “It’s been a huge achievement. I appreciate this opportunity and platform with HBO to launch my solo career, and to explore these genres and rhythms and make them mine.”

The documentary is part of the HBO Latino series that shows artists remixing classic hits, sharing stories from their childhood, and revealing their musical inspirations. “En Letra de Otro” has previously featured artists Farruko and Gente de Zona, but this is the first time a Black Latina has the platform to discuss her career, past and present. In Goyo’s “En Letra de Otro”, she fuses covers of salsa and urbano classics with her original reinterpretations through reggae, RnB, jazz, and hip hop. The album is mostly covers, but Goyo includes two original songs of her own. “En Letra de Otro” sees Goyo unrestrained by genre, showcasing her expansive talents, from intimate, acoustic recordings to bombastic soca and afrobeats.

The album allows Goyo to honor industry heavyweights, such as Shakira, Carlos Vives, and Tego Calderón, who she grew up listening to during formative moments of her life: after having her heart broken or while out dancing unapologetically with friends. Her renditions of the songs “Antología,” “Pa ‘Mayte” and “Pa Que Se Lo Gozen” capture the breadth of Goyo’s many intersecting interests perfectly. She is a sensitive, Afro-Colombian woman telling stories of unapologetic joy, heartache, and folklore. 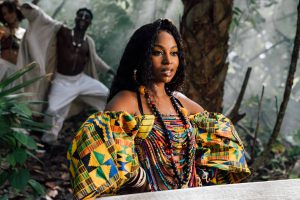 Goyo was raised in a matriarchal, musical family. In her small town of Condoto, in the Department of Chocó on the rural Pacific coast of Colombia, her family instilled in her a sense of cultural pride through music. She would watch her mom and five aunts rehearse as soneras for comparsas, the local street carnivals that honor Colombia’s rich folklore. She even performed a Celia Cruz song in one before she was in fourth grade. At home, her father’s varied record collection nurtured her love and respect for all genres, from salsa to American pop. One of her aunts, who toured with the salsa group “El Niche”, would recount stories to a young Goyo, who was eager to make a life out of music herself. Music, and the joy it brought her, would inspire Goyo’s nickname–she spent hours singing the song “Goyito Sabater” by El Gran Condo, a jubilant salsa.

“As I grew up, new sounds arrived that helped me evolve my idea of music,” Goyo said during our conversation. “The urbano movement came: with its irresistible flow, that fury of the street, a revolutionary spirit of change. [It encouraged me to] explore and find a personal stamp. That’s what rap is for me: the power to keep being real, and tell my own story.”

Goyo is well aware of her prominent position and the opportunity to represent Black culture. It’s the reason why she chose to honor Calderón, whose identity as an Afro-Latino she credits for motivating her to continue in the genre. “I wouldn’t have wanted to work in the genre had it not been for him,” Goyo said. “I already liked [American] hip hop, but in Spanish, I had to find out about Tego to fall in love with it.”

The music industry has long been criticized for whitewashing and only platforming white artists in genres created and bolstered by Black and Afro-Latino artists. While white artists like J Balvin, Karol G, and Rosalia are celebrated and top charts, their Black and brown colleagues are not always treated equally. Most recently, the Puerto Rican rapper Residente criticized Colombian reggaetonero, J Balvin, for his complicity in the racist video for Perra, in which he walked Black women on a dog leash. In December 2021, Balvin was unexplainably awarded the “Best Afro-Latino” Award by the African Entertainment Awards USA, which has since changed the award title to “Best Latin Artist.” The award sidelines the countless Black and brown artists working and spearheading the urbano movement. In Residente’s diss track, in collaboration with BZRP, called “Music Sessions #49,” he shouts out ChocQuibTown and points out that they and other Black artists have had to fight twice as hard for a fraction of the same recognition. Goyo agrees with Residente’s track, saying they may be in the culture but they are not on the same playing field as their white colleagues. 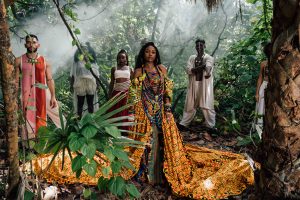 “To represent doesn’t mean I have to be the example, because I can’t say that I’m excellent or perfect,” Goyo said. “But, it’s important to make the topic of Afro-Latin, Afro-Colombian [identity] as visible as possible because there are few opportunities for Afro-Latin and Afro-Colombian artists. In urbano, there is not much Afro representation right now, and you can’t explain how so much talent still can’t get to where they need to be like other artists have. It’s not because of the quality of the music, but because of the routes and the way that Black and Afro artists are received. It’s important to put [that conversation] on the table.”

Goyo closes out “En Letra de Otro” with one of two original songs, “Boga Boga,” which features Goyo’s mother, Nelfa Perea. Goyo and Perea composed the song about bogas, Indigenous and Black enslaved boatmen. “The boga isn’t scared of the downpour,” Goyo croons, telling the story of a boatman floating down the stream. His weary eyes expose the many challenges he faces, yet he continues into the next day. Goyo was inspired by the Black Colombian poet Candelario Obeso, whose first-person narratives give insight into the lives of bogas. Growing up, Goyo recalls her mother telling her stories about the bogas on the river, the same river her classmates traveled down to get to school every day — a kind of ritualistic passageway.

“All of those memories, the tempo of the song, the ambiance, would take me there,” Goyo said. “It guided me and brought out a beautiful piece that is very sincere. I wasn’t thinking about numbers. I was thinking about being genuine and sharing a piece with my mom for the first time.”

Now that the film and album have been released, Goyo says she will still perform occasionally with ChocQuibTown. Otherwise, she is continuing to adapt to Miami, which she moved to from Colombia at the end of 2020. “I had been thinking about moving here for a while. This was the next step,” Goyo said. “I thought, why can’t we make it global?”

Revisiting the album, Goyo says her favorite song is undoubtedly her other original piece, “Nanana,” whose upbeat and jovial tone disguises a song about setting boundaries in relationships. “It’s a song that accompanies you when you have to say no,” Goyo said. “When you have hope that everything will be better because you deserve better things. That’s what I’m about.”

As Goyo answers questions with serene poise, one of her few visible tattoos stands out. The depiction of the Egyptian Queen Nefertiti, on her inner left forearm, is a reminder to her of the feminine strength, power, and devotion that was instilled in her from a young age. The warm colors and soft textures of Goyo’s matching skirt and vest set, made of hand-felted wool on cashmere, connote a seaside verbena lasting well beyond the sunset. But the suit’s Afrofuturistic structure also feels like armor, and the boss is Goyo.

“En Letra de Otro” may be partially inspired by words formed by others, but it is distinctively Goyo.