Álvaro Díaz is watching you. To be fair, he’s watching everybody. Díaz, the 31-year-old rapper and lyricist who hails from San Juan, Puerto Rico, is chronically observant. This becomes clear as he stares back at me from across the Zoom screen. Díaz is all ears, which is a good disposition for a rapper concerned with culling his art from the everyday moments of life. (He is the Notes App type, he says, incessantly writing down snippets from conversations). There’s a word in Spanish for people like him: calladito.

Álvaro Zooms me from his AirBnb in Mexico City, where he is recording his forthcoming album, “Felicilandia.” Díaz looks straight out of a streetwear ad, wearing a black pullover and a red-and-white cap with a distorted Mickey Mouse printed on it. He is in the final stretch of “Felicilandia,”” with only two songs left. Díaz, with his bashful smile and round, rosy cheeks, is charming, though he says he is “the shyest person ever.” It is an unexpected admission from someone who is so at home in his performance of the Trap genre. “If I feel comfortable, I’ll talk. But if not, you have to take the words right out of my mouth,” says Díaz, which confirms my suspicion that, despite the debauchery and cockiness he plays up in his songs, he is secretly the baby-faced cherub of the Latin Trap world. 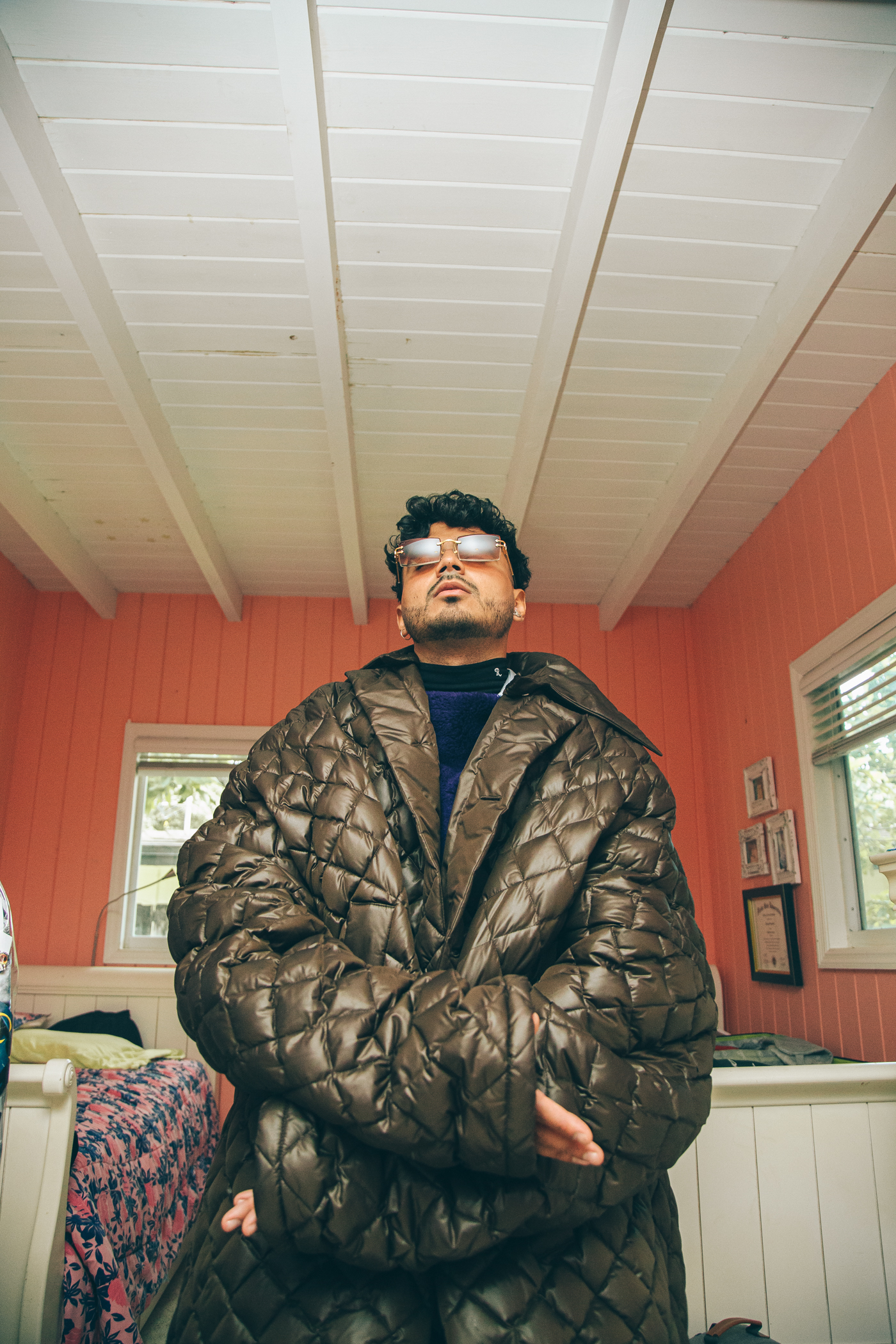 Díaz, who first began posting his music on Soundcloud in 2012, was one of the first artists in a new wave of Latin Trap, which later became a global sensation. Latin Trap has its origins in Puerto Rico, where rappers and reggaetoneros began to riff off of the sonic and lyrical themes of Trap and classic hip hop, while adding a distinctly Latin sound. In “Ga$tar,” a track Díaz made in 2013 with artist Fuete Billete, you can hear Trap’s influence on his early work: thickets of dense, languorous basslines, like a song in slow motion. But before the backtrack lulls you into a daze, Díaz adds his own twist, spitting out deft verses, and you are wide awake again. This playful experimentation continues on his later EPs and albums. Díaz has established himself accordingly as an unorthodox artist who eschews the influence of reggaeton, which was for a long time a dominating presence in Latin hip-hop, and instead embraces the sounds of rappers like Kanye West, 50 Cent and Kid Cudi.

On stage, Díaz requires no coaxing. Performing is his favorite part of music.“When I’m performing, I’m another person. But I don’t know who,” he says.  When we spoke, he had just performed his first live concert since the pandemic, in Mexico City. “It wasn’t the biggest show I could have done,” Díaz admits. But he cares less about the numbers than he does about the crowd’s intensity. He grins, reliving the thrill. “Numbers can tell us one thing, but I have songs that ain’t got that many numbers. Those are the ones my fans go the craziest for.”

“Díaz Antes,” Díaz’s first studio album, is also his most ambitious project to date. “Díaz Antes” is based on the concept of flipping through the radio. The album is divided into five highly varied “stations,” each with its own premise. It is a genre-bending trip, unlike any other in the Latin Trap universe. Some “stations” drill dense trap beats, while others loop over ‘80s synths, or submerge you in a din of jaunty dance music. Many of the tracks in “Díaz Antes” are teasing and wry, importing the bravado of the Trap genre for a boasty, assertive rapport.

Díaz is at his most innovative in the fourth “station” on the album: “La Ciudad de Los Niños Tristes.” The section is a batch of five tracks which are, as the station’s tongue-in-cheek title suggests, downbeat sounds for a generation of sadboys. “Reina Pepiada” stands out as a chill-hop-track-turned-banger, recruiting spacey lo-fi beats and an infectious hook to outstanding effect.

“I was the shy guy that didn’t tell nobody I sang,” Díaz recounts of his childhood in San Juan. But even if he wasn’t going public with his talent just yet, he was watching artists at work all around him. “My mom always used to sing to me when I was little,” says Díaz of his mother, an interior designer. (He is a self-professed mama’s boy — his mother is a member of all his fan clubs on social media, and responds on his behalf to every fan that will write to him). The list goes on: his dad used to play instruments like conga and trombone, and his grandparents write books. The artistic influence has cohered in Díaz, whose lyrics can be astonishingly poetic: “Sembré algodón y coseché una nube/Para construirte una casita en el cielo/Y ahí vivir, y ahí morir, enrolladito a ti como un gongoli.” 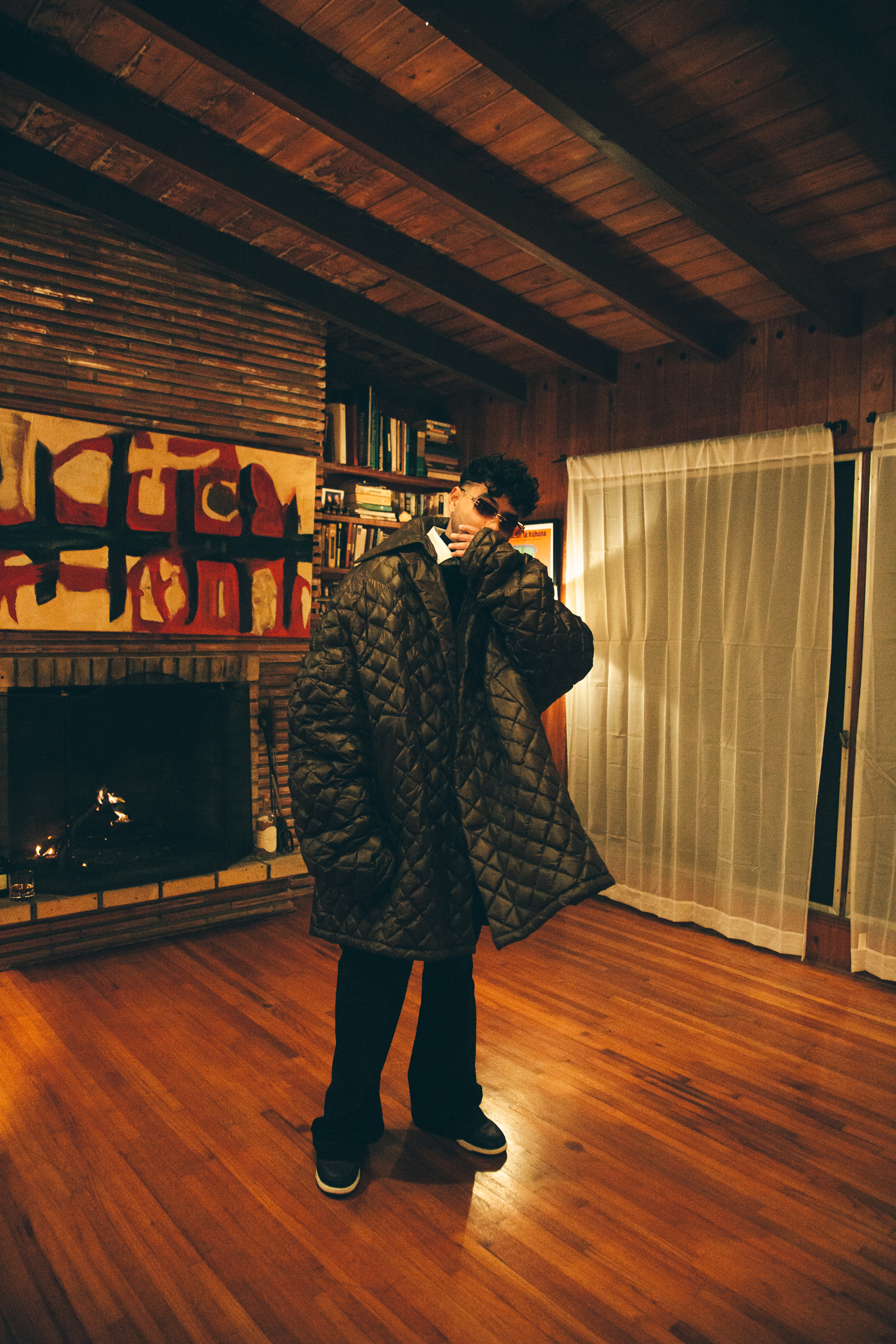 For Díaz, the come-up hasn’t been easy. Latin Trap is the more underground cousin of reggaeton, and thus Díaz’s music was not afforded the same degree of investment by record labels or promoters as reggaeton was. In 2016, Díaz toiled on a full-length album, “Díaz Buenos, Díaz Malos.” But it didn’t work out. “[The labels] weren’t able to see what this new movement was able to do. People like to see it being done before they believe in it,” Díaz gives me a what-can-you-do shrug. But his frown reveals the extent of his disappointment. “I wanted a Grammy, you know? But it just wasn’t the time,” he says, of an industry where timing is everything. Ultimately, every track from “Díaz Buenos” found its way into another project, but the setback was demoralizing.

As if to nullify the question of finding the right moment, Díaz has become prolific in his output, ensuring that he doesn’t miss a single opportunity. He is an irascible stream of ideation. Even as he finishes recording “Felicilandia,” he is half-way through writing another album. He composes and produces his own music. He also has a fashion line, LV CIVDAD, and is part of a music collective of the same name with his friends. His creative reserves never deplete in part because he extracts his source material from the everyday. His songs are, if not strictly autobiographical, a melodramatic adaptation of the truth. “I’ve exaggerated things,” Díaz says. “Like, maybe we went to a club, and I look at you and you look at me, and that’s all that happened. In my song, I’ll exaggerate that story. But it came from a true moment.”

Díaz’s best work comes from his capacity for narrative world-building. His 2016 EP “San Juan Grand Prix“ is written as a series of surreal vignettes — fictionalized internal monologues spoken by a Formula One driver from inside the car as he completes a race. The EP is loosely referential; the narrator is based on F1’s Aryton Senna, and his love interest is a dreamscape version of Mia Wallace, from Pulp Fiction. Díaz populates his world with a colorful blend of fictional and real characters, a kind of trap-magical-realism.

Díaz’s friends say the best thing about him is his creativity. But this superlative quality, when combined with unyielding ambition, gives him a sharp edge. “I’m a tough person,” says Díaz. “I like to do things the right way. I can get mad if that doesn’t happen.” When it comes to the process, he doesn’t play around. “In the studio, I’m really introverted. I’m vulnerable. I don’t like to be with a lot of people. I usually get mad when people start inviting other people to a studio while I’m creating,” says Díaz.  He works compulsively. “Every moment that should be dedicated to resting becomes finishing my work,” says Díaz of his non-existent downtime. “Going to the movies, going out, going to clubs to listen to music, even that becomes work. Because I’m studying it all.” In case you were wondering, he doesn’t sleep much.

I sense behind Díaz’s boyish face and introversion a restless, exacting psyche. But his music is all the better for it. Díaz has proved to the world that Latin Trap is a moldable medium, and with “Díaz Antes,” he has laid bare both his and the genre’s versatility and range. It is a sweet payoff for an artist who has spent over a decade sizing the world up and spitting out what he sees.